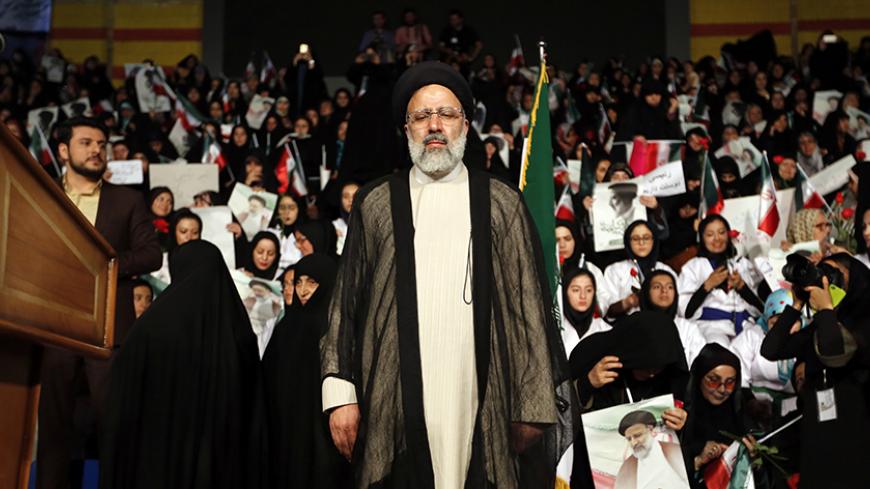 With two weeks to go to Iran’s May 19 presidential election, Principlist candidates have embarked on a competition to see who can attract more voters by making bigger campaign promises.

Conservative hopefuls Ebrahim Raisi, the custodian of the holy shrine of the eighth Shiite Imam, and Tehran Mayor Mohammad Bagher Ghalibaf have placed their focus on Iran’s lower classes, which they hope to win over mainly with monetary promises. Ghalibaf said April 24 that if elected he would increase monthly cash handouts, which were initiated by the government of former President Mahmoud Ahmadinejad (2005-13), increasing them up to 2.5 million rial (around $66) from the current 455,000 rial (around $12) per month. The next day, April 25, Raisi vowed to triple the monthly cash payments.

The administration of President Hassan Rouhani (2013-present) has long voiced discontent with the payments, which became very popular under the Ahmadinejad government. On Feb. 20, 2014, Minister of Labor, Cooperatives and Social Welfare Ali Rabiei urged wealthier Iranians to forgo the payments, saying, “For the sake of the greater national interest, which includes the extension of public insurance, youth employment and helping the lower classes of society, withdraw from receiving cash handouts.” His call largely fell on deaf ears as the vast majority of Iranians continued to receive the monthly payments.

The campaign pledges made by the conservative candidates have outraged even some prominent figures within the Principlist camp. On April 24, parliamentary speaker Ali Larijani said, “The bounty of the people is much more than handing them cash. People don’t want charity, and an honest politician will not make such promises.”

His comments, however, did not stop the conservative candidates from making more promises. Thus, on May 1, Larijani reiterated, “Considering the revenues and expenditures of the government, increasing the amount of subsidies is impossible because the government has no money for it.”

Raisi and Ghalibaf’s campaign pledges have not been restricted to increased monthly cash payments. On April 25, Raisi also vowed to create 1.5 million jobs every year. One day later, Ghalibaf followed suit and promised to generate 5 million jobs if elected. Their statements even prompted the incumbent Rouhani administration to react. On April 26, First Vice President Eshaq Jahangiri said, “That brother who promised millions of jobs has either never created jobs or does not understand numbers and figures.”

Mohammad Reza Bahonar, a theoretician of the Principlist movement and former first deputy speaker of parliament, also criticized the promises made by Raisi and Ghalibaf. On April 26, Bahonar said, “Candidates should not plunder the country’s wealth and make promises that the government has to finance. We should not be unfair in our critique of the Rouhani administration’s performance. When Rouhani took office, inflation was 44%, but through measures, [he] was able to reduce at least 30% of this [meaning current inflation is one-third less than in 2013]. If we are unfair in our criticism, it will have an opposite effect [to what is intended with the critique].”

Yet the issue of excessive campaign pledges carried over into the first live presidential debate on April 28. During the debate, Ghalibaf accused Rouhani of promising to create 4 million jobs when he was running in the 2013 presidential election, a claim Rouhani was quick to reject.

Prominent economist Saeed Laylaz told Al-Monitor, “In regard to Mr. Ghalibaf, the reality is that he does not have much political stability and wants to obtain power through any means possible, which is why he changes [his political stance] every day. One day he is close to religious movements, the next to the cultural community — and today we see that through his promises [he] is trying to attract the lower classes of society and imitate Ahmadinejad’s model. This is while his slogans are unfeasible from the core. The jobs created need to be regenerative. The creation of these promised jobs should not point Iran’s economy toward quick return businesses that symbolize a ruin of national resources and an embodiment of complete corruption as was seen during the Ahmadinejad era.”

It seems, however, that while having full knowledge of the economic slump in the country and the government’s failure to clearly project its economic achievements during the past four years, the conservative candidates plan to continue with their pledges in an effort to appease the lower classes in society. Another aspect of the strategy that Raisi and Ghalibaf have pursued is to highlight their promises while pointing out the economic issues that the public is aware of and understands.

Addressing his supporters in the southern city of Bandar Abbas on May 1, Raisi spent a great deal of time on economic issues and the problems in the region, saying, “Every year we have 700,000 marriages in the country, which can [be increased and] reach 1 million. We can achieve similar numbers in housing if we renovate old rural areas and create new housing. Youth marriages are a national concern today. Young people are asked about why they don’t get married and they say it is because of [lack of affordable] housing or [lack of] jobs. Or we ask women why they want to separate from [their] men. They say they want to do this because he [the spouse] has no housing.”

On May 1, Ghalibaf repeated his pledges in an interview on Iranian state television while continuing to make high-handed promises. Painting a dark and gloomy image of the current situation in Iran, he said, “Twenty-five million people in Iran are in complete poverty or have low income. My plan is to solve their short-term problems immediately. Naturally, the root [cause] of this [situation] is unemployment, the [economic] slump and high prices. As for long-term measures, we need to solve unemployment.”

But how effective are these promises? Sadegh Zibakalam, a prominent professor at Tehran University, told Al-Monitor, “The Principlists have engaged in a competition of making populist promises. However, with a simple calculation we can see that the numbers these gentlemen claim are unfeasible. The idea of paying equal [monthly cash] subsidy payments to everyone was wrong. In the days left [of the campaigning], supporters of the government [should] clarify for the public how impossible the promises that the conservatives have claimed are.”