Iran's housing sector, once an engine of the Iranian economy, is unlikely to exit recession anytime soon, in part due to homeowners refusing to sell at a loss. 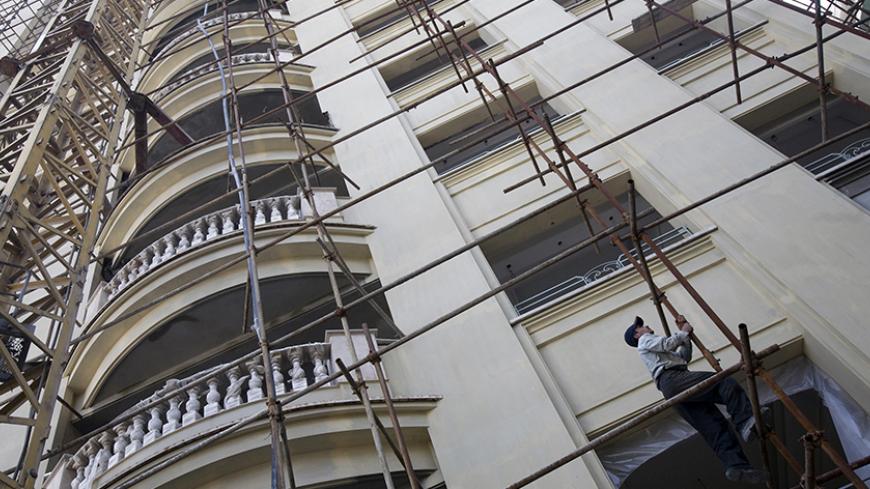 An employee works at a residential building, currently under construction, in northern Tehran, Iran, May 17, 2008. - REUTERS/Morteza Nikoubazl

Iran's enduring housing recession has cost many Iranians their dream of homeownership while depleting their purchasing power due to higher rent. The housing sector is unlikely to return anytime soon to the days when it was Iran's best investment option.

The "Iranian dream" is the same around the world. Iranian families work hard to own a place they can call home, whether it's a small apartment in Tehran or a house built of mud and stone in a village. Until recent years, the demand for housing was amplified by a volatile economy in which real estate presented the safest option for investment. This made housing one of the most prosperous sectors of the national economy.

In 2012, Iran's housing sector accounted for 20% of the gross domestic product (GDP), with investment in housing reaching 8% of the GDP. This was interpreted as a sign of sustainable growth in housing. For most of the 1990s and 2000s, investment in housing as a share of the GDP oscillated around 5%. As oil prices began to rise in the early 2000s, the housing sector significantly expanded. Boosted by oil revenue, housing construction intensified — particularly in Tehran. Few believed that the sector's growth would slow, as it appeared that demand would never be satisfied. The ensuing economic crisis — caused by declining oil prices and international sanctions over the country’s nuclear program — changed that. Things took a turn for the worse as rising inflation swallowed purchasing power.

The housing sector is a classic example of overinvestment in construction. Soon, supply had overtaken demand, with the latter particularly weakened by increasing inflation. In 2011, the number of construction permits issued began to drop. The fall was modest in the beginning, with a 2.4% decline in 2012 compared to 2011. However, in 2014, the number of construction permits issued dropped by 32.1% compared to 2013. After the oil boom, it was time for a real estate bust. As home prices plummeted, the number of transactions also dropped, with many homeowners refusing to sell at deflated prices.

In this equation, it must be noted that housing accounts for a great share of the spending of city dwellers. According to the Central Bank of Iran, the average urban Iranian family spends roughly a third of its budget on housing, including rent and utilities. Some researchers argue that housing-related expenses account for more than half of the average Iranian household’s annual spending. Moreover, in recent years, housing costs have increased relative to other expenses. Central Bank figures show that housing as a share of the household consumption basket amounted to 26.9% in 2005. A decade later, in 2015, it had risen to 35%.

The housing recession, coupled with the declining purchasing power of Iranian households, has translated into increased demand for rental properties — similar to the experience in the United States after the subprime mortgage crisis. Indeed, in 2016, one-third of Iranians were living in rental properties — compared to 26.6% in 2011. Iran’s Chamber of Commerce, Industries and Mining estimates that rent accounts for 70% of the average Iranian family's housing expenditures.

Despite the increased demand for rental properties, the number of empty homes in Iran has increased. The Statistical Center of Iran announced last year that one out of every 10 residential properties in the country is vacant. The same survey revealed that more than 2.5 million housing units in Iran are unoccupied — 55% more than in 2011. One is left to wonder about the reasons for this significant boost in empty properties since the housing supply increased by 17% during the same period. In Tehran, where many people are always searching for a place to live, 13% of available residential units are unoccupied. One key reason for this situation is that many property owners refuse to sell for less-than-expected returns.

It is true that the Rouhani administration has expanded the role of the bond market as a method to finance public debt. Moreover, its disciplined monetary policy has played an important role in reducing the inflation rate to single digits. Yet rather than interpreting this policy as a failure, prominent economists such as Saeed Laylaz believe it to be an achievement. In a March 2017 interview with Tejarat-e Farda weekly, Laylaz said the Iranian economy had undergone a structural shift, with the housing sector no longer dominating the economy. For economists like Laylaz, a lifelong advocate of the manufacturing sector, this brings hope of increased investment in manufacturing.

The Rouhani administration has increased the number of home loans issued in an attempt to boost demand for home ownership. However, the change in the nature of the Iranian financial markets and the country’s housing sector means that Iranians have other options. Demand for home ownership has become less sensitive to government policies and more in tune with Iran’s economic realities.

Today, many Iranians find it more profitable to buy government bonds or to invest in the currency market rather than lock their money in real estate. In this vein, corruption and murky property ownership laws also mean that the average Iranian faces increased risk and vulnerability when investing in property. Meanwhile, neither the Rouhani administration nor local authorities have proposed measures to increase taxes on empty homes.

Thus, the reality may be that the core issue plaguing the Iranian housing market is not decreased demand but reduced supply — especially given the climate in which property owners refuse to sell at a loss. With continuing uncertainty in nonoil sectors, measures to address the housing supply problem — such as further taxes on empty houses and penalizing speculators and investors — have a high chance of backfiring. Therefore, it is prudent to assume that the housing recession will continue through 2017.