Are Tehran Mayor Mohammad Bagher Ghalibaf’s constant transformations responsible for the premature end of his third bid for the Iranian presidency in the past 12 years? 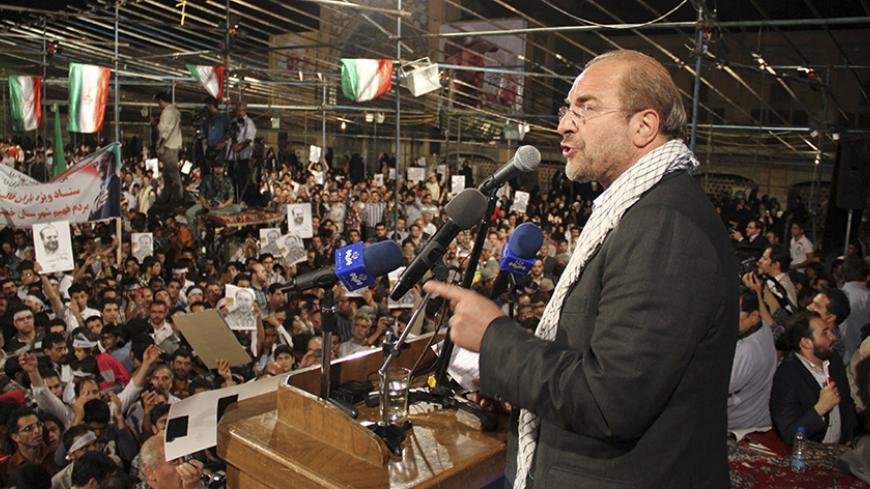 Tehran Mayor Mohammad Bagher Ghalibaf speaks at an election rally in Khomeinishahr, Iran, on June 10, 2013, during his second campaign for president. He dropped out of this year's presidential contest this week. - REUTERS/Fars News

Tehran Mayor Mohammad Bagher Ghalibaf on May 15 decided to end his third bid for the Iranian presidency in the past 12 years. In line with his propensity for undergoing transformations, he once again sought to portray a new image of himself this year, sparking claims that he was copying the agendas of other presidential candidates, both in and beyond Iran. Ultimately, the uncertainty among voters about who the Tehran mayor really is may have been the chief cause for the premature end of his latest bid for the presidency.

Having long dreamed of being president, Ghalibaf first ran for office in 2005. He secured 14% of the votes in the first round of polling that year, and came in fourth place. Just months before the vote, Ghalibaf had resigned from his post as the head of Iran’s police force and instead focused his efforts on changing his image as a military man. In an article published on June 28, 2005, US-based academic Behrooz Ghamari claimed that Ghalibaf sent his advisers to Britain to meet with those of the then British prime minister “to seek guidance from Tony Blair’s campaign managers on how to target the affluent middle classes of Tehran and repackage himself as a pro-reform candidate.”

During his 2005 campaign, Ghalibaf was repeatedly seen wearing slick and colorful suits. In an effort to shift focus away from his military background, Ghalibaf presented himself as a pilot and posed for pictures next to Airbus jets while dressed in a pilot’s uniform. His campaign slogan was “Iranians have a right to the good life,” suggesting that his target audience was the middle class, students and the elite. However, his discourse did not gain traction as voters preferred then-candidate Mahmoud Ahmadinejad’s talk of justice and support for the poor under a populist theme. Ahmadinejad won the 2005 election and succeeded Reformist Mohammad Khatami as president.

In September 2005, Ghalibaf was chosen to succeed Ahmadinejad as Tehran’s mayor — a post he continues to hold to this day.

In 2013, Ghalibaf once again tried his hand at the presidency. However, this time, he pursued a new vision under the slogan of "jihadi management" and tried to get closer to religious circles. There no longer was any sign of Ghalibaf’s colorful suits. His beard grew a little longer and he often wore a kaffiyeh around his neck — both symbols of the religious movements on Iran’s political stage. This indicated that Ghalibaf was no longer seeking the votes of the middle or educated classes.

Saeed Laylaz, a political analyst and professor at Shahid Beheshti University in Tehran, told Al-Monitor, “Mr. Ghalibaf is not an ideological person and his priority is to reach power. This may not be a problem. But the main issue is that to achieve this, he will imitate whatever idea or agenda he thinks is fascinating in that [particular] round [of polling] and [thus] he is never himself. This leads to society viewing him as an individual who does not have much stability in [his] strategies.”

Ghalibaf’s new approach in 2013 was not successful either, coming in second place with some 16% of the vote.

Undeterred by his second defeat in eight years, the Tehran mayor once again decided to compete in this year’s presidential race. This time, his campaign had a whole different tone; it was focused on Iran’s lower classes, whom Ghalibaf hoped to win over with huge campaign promises.

His campaign also had a feature many have criticized and described as “copying.” While registering to run for the elections April 15, Ghalibaf spoke about a government of the “96%.” He revisited this theme in an appearance on Iranian state television April 27, in which he said, “If needed, I will offer my reputation and stand firm against the leech-like 4% who are sucking the blood out of the 96% of the population. When we want to fight this 4%, [we see that] they have power, connections, money and influence. … My government will be determined to fight against this 4% and stop unnecessary imports.”

Many criticized Ghalibaf’s new campaign strategy. On April 29, Abbas Akhoundi, the minister of roads and urban development, said, “During Ghalibaf’s 12-year mayorship, this 4% did not have a more loyal supporter than Ghalibaf. These 12 years have been the golden era for property speculators to openly do anything they want in Tehran.”

There has also been criticism of Ghalibaf for “copying” the discourse of the “99%” and the “1%” put forward by the Occupy Wall Street movement and US Sen. Bernie Sanders.

The controversy surrounding Ghalibaf’s selective “borrowing” from other campaigns was brought up May 5 in the second televised presidential debate, when incumbent Hassan Rouhani forcefully said, “Four years ago, the 99% movement was created somewhere. To clumsily copy it [now] and change it to 96% because it is the year 1396 [in the Iranian calendar]. … What does it mean to say the 96% movement has been formed? Don’t do such things.”

Iranian social media users reacted to this by setting up #ghalicopy, which trended as the third most popular hashtag May 2 on Twitter.

A recent election survey had Ghalibaf in third place with 25% of the vote, behind Rouhani's 42% and cleric Ebrahim Raisi's 27%.

Some Iranian analysts view the political maneuvering of Ghalibaf and his inner circle as resembling the actions of US President Donald Trump rather than Sanders. Mehdi Ghadimi, a veteran Reformist journalist in Tehran, told Al-Monitor, “Although Ghalibaf adopted his campaign slogans from American models, beyond it all, he seems to be very influenced by Trump’s victory. But he does not know why Trump’s discourse is popular in the United States and thinks the reason for Trump’s victory was his obvious immorality. Therefore, he [Ghalibaf] tries to appear more vulgar every time — from copying the actions and words of popular Reformist figures to telling lies that create anxiety in others.”

Tehran’s mayor, who 12 years ago was hoping to come to power under the slogan of “Iranians have a right to the good life,” and four years ago spoke of “jihadi management,” has seen his third and potentially last bid for the presidency buried with the slogan of “the 96% against the leech-like 4%.”