A draft law that would impose fines on vendors who harass tourists in Egypt also hopes to curtail the sexual harassment of visitors to the country. 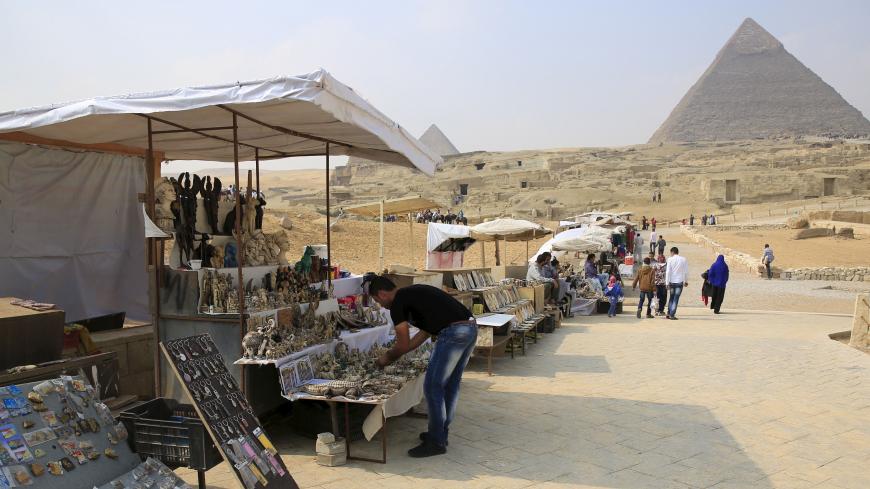 Souvenir vendors wait for tourists in front of the Giza pyramids on the outskirts of Cairo, Egypt, Nov. 8, 2015. A draft law would fine hawkers who harass tourists to buy the seller's wares. - REUTERS/Amr Abdallah Dalsh

Egypt has drafted a bill that would impose hefty fines on people who harass tourists as part of efforts aimed at attracting additional tourists to Egypt and reinvigorating the country’s struggling tourism industry.

“The draft law ensures that if tourists are annoyed, their harassers will get a maximum fine of 10,000 Egyptian pounds,” El-Anani was quoted as saying in local media. He said that the punishment is delineated in a new article introduced to the Antiquities Law, which was issued in 1983.

“The draft law would help put an end to sexual harassment at tourist sites — a practice that mars Egypt’s reputation abroad,” Hossam el-Akawy, a tourism expert and a member of the Tourism Investors’ Association in the Red Sea, told Al-Monitor.

Akawy said souvenir hawkers are often seen chasing visitors at the country’s sightseeing sites to force them to buy their wares. “Such a practice irritates tourists and gives them a bad impression about Egypt and the Egyptian people. That is why a decision to punish those who do that is very good,” he added.

The expert also said that the decision will send a message to the world that Egypt is taking all legal measures necessary to put an end to sexual harassment and rape incidents against tourists.

Tourism is a crucial source of hard currency for Egypt. However, the key industry has been wobbling following the 2011 revolution as well as the downing of a Russian plane over Sinai in 2015 that killed all 224 people onboard.

Tourist arrivals stood at 9.3 million in 2015, compared with more than 14.7 million in 2010, data released by the state-run Central Agency for Public Mobilization and Statistics show.

Mohamed Abdu, a member of parliament's Tourism and Civil Aviation Committee, said the government has to ensure that the Egyptian people are aware of the importance of the tourism sector to the country in order to lessen incidents that harm the industry.

He called upon the government to add lessons on tourism to the primary school education curriculum to raise awareness among citizens about the significance of tourism and its high contribution to the gross domestic product.

“Media outlets should also help in that by allocating an hour per day to raise awareness among ordinary citizens about how to deal with tourists and how to preserve the country’s tourism industry,” he told local media.

The draft law, however, has been met with mixed reactions among the country’s ordinary citizens. Sara Mohamed, a 26-year-old pharmacist, said the draft law punishing sexual harassment against tourists is a very good decision. However, she added that the government has to crack down on all harassers in general and has to put an end to this phenomenon by toughening penalties and putting the law into effect.

“It is not only tourists who suffer from sexual harassment, but ordinary citizens as well. That is why the government needs to end this phenomenon in general,” she told Al-Monitor.

In recent months, the government has been working tooth and nail to breathe life back into the country’s tourism sector in order to ease its hard currency crunch and stimulate economic growth.

In November 2016, the Central Bank of Egypt floated the local currency, which currently stands at about 18 pounds to the US dollar. Experts say that the central bank’s decision to float the Egyptian pound has made it cheaper for foreigners to vacation in the country.

The UK newspaper The Independent last month published a report urging UK tourists to consider spending their vacations in Egypt, saying tourism there could be on its way to recovery.

Tourism Minister Yehiya Rashed said in March that the number of tourists visiting Egypt this year could come close to levels seen before the 2011 uprising; a cheaper pound and investments in airport security are helping drive the increase. Rashed said Egypt had spent $50 million on airport security.

“I think if we are fortunate enough, this year we will come very close [to pre-2011 tourism levels]. We are hoping to close the gap as we go on,” Yehiya told Reuters at the world’s largest travel trade fair, ITB Berlin, in March.