In an effort to curb aggressive vendors and beggars, Egypt imposed heavy fines on those who harass tourists, but could it work on the ground? 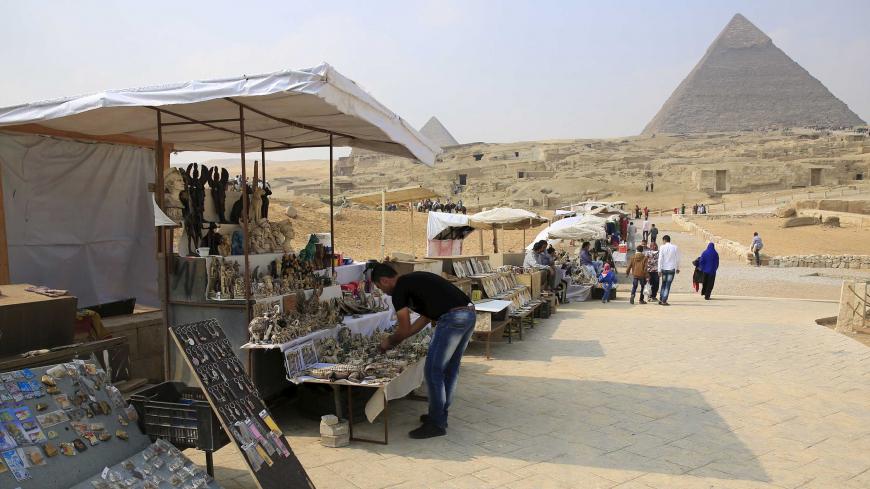 Souvenir vendors wait for tourists in front of the Giza pyramids on the outskirts of Cairo, Egypt, Nov. 8, 2015. - REUTERS/Amr Abdallah Dalsh

Tourists visiting Egypt’s historical sites will no longer be harassed by the country’s infamous souvenir sellers if a new law that was passed earlier this spring is implemented.

On April 23, Egypt’s House of Deputies approved a law allowing authorities to fine anyone found to be pestering tourists at archaeological and historical sites. The penalty is not insignificant, as it may go up to 10,000 Egyptian pounds (about $565).

Most tourists are happy about the new law. "Being pestered by vendors at beautiful historical places is particularly annoying and gives a negative image of Egypt," Maria Daniel, a Spanish tourist, told Al-Monitor. She noted that tourists have the right to just enjoy the site without being obliged to buy something from local sellers.

“I have the right to buy or not to buy without any pressure. This law could change and help in providing us a comfortable atmosphere for sure," Daniel added.

Mohamed Abdo, a member of the parliamentary Tourism and Aviation Committee, believes that the vendors and beggars who pester tourists not only harm the tourists but undermine Egypt’s image and tourism revenues.

“Obliging the tourists to buy goods is outrageous. The law is a step forward and must be applied well in order to protect the tourists,” he told Al-Monitor.

He said that beggars exist in all countries, but they should be kept far away from touristic places for fear of tarnishing the country’s image. “Tourism is a national issue. The pestering of tourists not only harms the tourist but hurts the country and deprives us of our national income,” he added.

The tourism sector is regarded as one of the most important sources of income for Egypt, as it accounts for around 12% of the gross domestic product. The country’s annual tourism revenues averaged $7.8 billion from 2010 until 2017, reaching an all-time high of $12.5 billion in 2010 and a record low of $3.8 billion in 2016.

On April 25, Rania al-Mashat, Egypt’s new minister for tourism, said that the number of tourists visiting Egypt during the first quarter of 2018 has increased by 30% against the previous year.

Abdo suggested that while the penalty would be a positive step, it may not be enough to deter the vendors. He also suggested that the new law be coupled with efforts to raise awareness among all Egyptians about tourism and its importance to the national income — not just those who work in this sector.

Seif Elamri, a former member of the Egyptian Tourism Federation, told Al-Monitor that the penalty is not enough. “The violator should be put in prison,” he said. Until this happens, he noted, the law should be implemented well, which is a point of concern given the vast areas of favorite tourist sites in the country, from the pyramids to the Luxor Temple.

The fact that there are surveillance cameras in key sites makes the police’s work easier, Brig. Gen. Abdel-Gawad Amin, the assistant director of the General Directorate of the Police of Tourism and Antiquities of south Luxor, told Ahram Online.

He pointed out that tour guides can report the abuse and the cameras can spot any abuse easily. "Our work is to apply the law and control violators,” he said.

Other side with the vendors. Teguh Amor Patria, a doctoral student in the department of Sustainable Tourism and Protected Area Management from Michigan State University, said he felt uneasy about the law. “I think it would be wise to plan for a program first and introduce the laws to the sellers. It does not sound right to impose a regulation without giving them a chance to learn,” he told Al-Monitor.

Explaining that tourism ideally should benefit all involved stakeholders, including local residents, Patria thinks one of the solutions is to provide local residents, including vendors, with a clear understanding of the hospitality business. “Thus they can create and produce products that cater to the needs of tourists without pestering them with goods and services they do not want to buy,” he added.

Patria suggested considering measures such as providing a special zone where vendors are allowed to offer goods or services or limiting the number of vendors so they can still offer goods but without intimidating tourists.

"Of course, it may not be as easy in reality. So I think we should start with a program or training,” he said, adding that a lasting solution where tourists and the local vendors are both satisfied would require common efforts from the government, tourism sector and local communities.