A proposed law to shut down businesses early has infuriated not only shop owners, but also tourism workers, cab drivers, multimillion-dollar businesses and their customers, Mohannad Sabry writes. They're braced for severe economic effects, including drastically reduced revenues and layoffs. 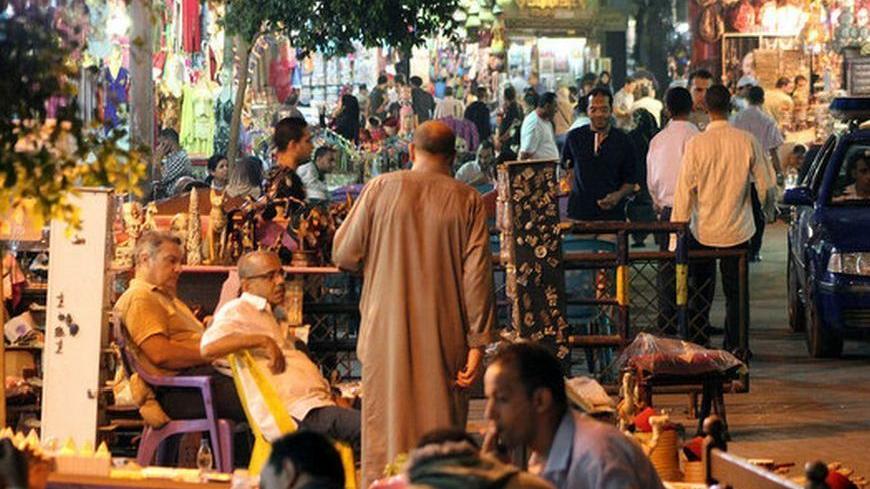 CAIRO — In the late 1700s, Fahmy Ali Al-Fishawy established what became Egypt’s most prominent coffee shop in the heart of Islamic Cairo. Nobel Prize winner Naguib Mahfouz was one among dozens of novelists, artists, politicians and even presidents who regularly sipped their mint tea and smoked water pipes at the historical, arabesque-styled cafe.

For more than 200 years, Al-Fishawy café, which is listed in almost every Egypt tourist guidebook, never closed before dawn or as long as customers continued to scent the air with fruit-flavored water pipe smoke. But as of December, Al-Fishawy and every other café and restaurant in Egypt will be forced to shut down at 2 a.m. while shops will have to close at midnight.

Egypt’s government, headed by Prime Minister Hisham Qandil who was appointed by the first democratically elected president, Mohammed Morsi, said the law proposed in October, aims to solve the country’s power crisis which intensified during the summer and left whole neighborhoods living in total darkness for days. Whoever seeks an all-night business will have to obtain a tourist establishment license.

The proposed law infuriated not only shop owners, but also tourism sector workers, cab drivers, multimillion-dollar businesses and customers of all of the above.

“Our business starts at 10 p.m. and continues till sunrise. Does the government expect locals and tourists to come during work hours or the smoldering daytime heat?” Akram Al-Fishawy, the grandson who runs Al-Fishawy Café in Islamic Cairo told Al-Monitor. “Is this how the Morsi’s government awards us after two years of unrest that paralyzed our business since the January 25 events?”

Akram Al-Fishawy says that his profits deflated by 80% since Egypt’s uprising that toppled Hosni Mubarak’s regime and left the country struggling with a security vacuum and a wrecked economy, but this law seems to threaten his business even more. “This law will destroy our business; I will have to lay off workers and will not be able to cover my taxes.”

Khan El-Khalily, the tourist market in Islamic Cairo where Al-Fishawy is located, is home to hundreds of tourist bazaars, jewelers, cafes, restaurants and street sellers who serve thousands of locals and tourists around the clock. The market’s rush hour starts around 9 p.m., but only a few of the businesses have tourist establishment licenses.

“The tourist establishment license costs between $10,000 and $25,000, it’s impossible for such businesses to obtain it,” says Mohamed Fouad, a tour guide who believes the early-hours law will have devastating impacts on Egypt’s already ailing tourism sector.

“Fifteen percent of Western tourism will be affected by the law, which could be tolerated, but we are in risk of losing 95% of the Arab tourists who spend millions of dollars to enjoy Egypt’s sleepless nights and escape their countries’ heat,” said Fouad.

Fouad believes that even if such facilities managed to obtain tourist licenses, “prices will explode because they will be put in a higher tax category; it will drive millions of tourists to competing countries like Turkey and Lebanon, and will eliminate local tourism which keeps the sector alive in low seasons and when foreigners are already driven away by instability.”

Night shift workers are concerned they will lose a major part of their income due to the government which, according to many, proposed the law but offered no compensation to those impacted.

“If Morsi’s government wants me to stay home then he should feed my kids,” said a 30-year-old father of two who works a night shift at a restaurant in Khan El-Khalily after finishing his day job at the government’s Antiquities Authority. “The government pays me $120 per month and now wants to shut down the restaurant that pays the rest of my bills. Is that the development President Morsi talks about?”

The waiter says hundreds of workers are planning major protests if the law takes effect: “They are wrong if they expect us to tolerate such actions; anyone who loses a job will be striking at Morsi’s presidential palace.”

Effects of the controversial law will inevitably go beyond unemployment and is concerning multimillion-dollar businesses as much as smaller ones. Egypt’s biggest supermarket chain, Metro Market, which operates 24 hours a day, is in risk of laying off hundreds and losing millions of dollars.

“We own and operate 90 branches all over Egypt that operate around the clock, if the law is applied, 1,100 night shift workers will lose their jobs and this is only the immediate effect,” said Mohannad Adly, managing director of Metro Market.

Adly doubts the government will solve the power crisis through implementing the law. “Metro Market is among the highest paying clientele of the state owned electricity company; we pay the highest rates and never receive any subsidies. Our payments are in fact used to cover subsidies to other sectors.”

“I cannot see how the state will cover the deficit if the government loses such enormous revenues it generates through us and similar clients,” said Adly.

He says that in addition to increased unemployment and millions of dollars in losses in the power and tax departments, Egypt’s traffic crisis will intensify, especially in the capital Cairo and other major cities.

“The reason why we have a night shift is that there is high demand by those who are unable to shop during the hectic daytime traffic,” said Adly, “not to mention more than 1,000 suppliers who deliver goods to us and our trucks that supply the branches all at nighttime. The impact on traffic will be unimaginable if such operations run during the day.”

Private transport workers added their voice to those who harshly condemned the law. Thousands of underprivileged Egyptians try to improve their income by driving cabs at night after finishing their day jobs, a similar case to the Khan El-Khalily Antiquities Department worker by day, waiter by night.

“If shops close early I will lose half my income,” said Mohamed Hussien, a 34-year-old cab driver who makes around $130 per month driving a cab from 7 p.m. to 3 a.m. “Doesn’t the government know that thousands of families will starve due to this law?”

Rashad Abdo, an economics professor and head of the Egyptian Forum for Economic and Strategic Studies, believes that enforcing such a law will “hamstring the pillars of Egypt’s economy: trade, industry and the tax department.”

“The government blames the budget deficit on labor strikes and decreasing public income, but at the same time will generate losses in billions by shutting down the whole country’s night shift,” said Abdo, “They are asking people to starve and live without dignity.”

After almost two months of condemnation and warnings of severe economic impacts, Egypt’s government insists on enforcing the law at the beginning of December. Morsi addressed the ongoing debate in a public speech on Friday, Nov. 9. “Those who stay up all night, when do they work and how do they expect to make profits if they don’t pray the dawn prayers?” he said.