The prestigious Israel Festival opens with Nasreen Qadri's songs in Arabic and Hebrew in support of coexistence. 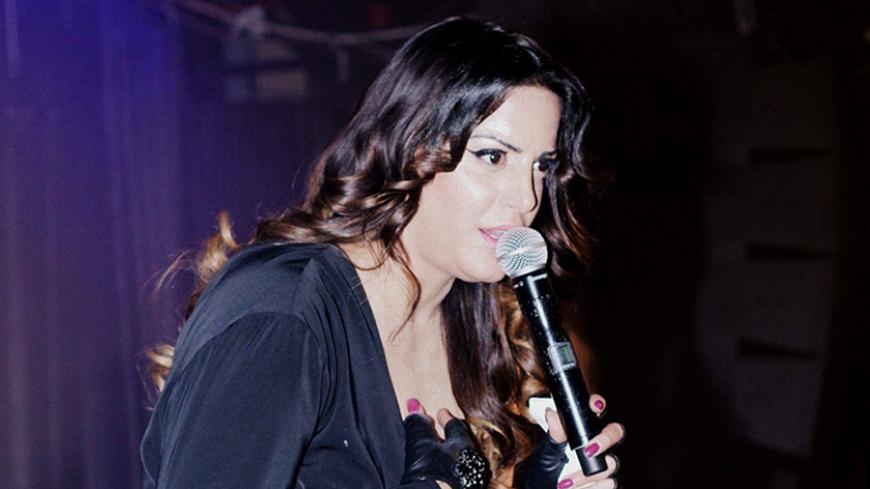 The choice of Nasreen Qadri to sing at the opening ceremony of the Israel Festival is not to be taken lightly. Qadri, 30, is an Arab Israeli born to Muslim parents in the coastal city of Haifa and currently lives in the suburban Tel Aviv town of Rishon Lezion. On June 1, she will stand on the large stage erected at the foot of the walls surrounding Jerusalem’s Old City and sing at the opening of the most prestigious Israeli festival, which this year will also mark a half century of the city’s unification, since the 1967 Six-Day War.

The festival directors decided that the best way to mark the unification of the Jewish and Arab parts of the city and to showcase its multiculturalism would be through groove music, which has developed in Israel in recent years fusing innovative Western sounds, quarter tones, traditional Arab-style improvisations and Mediterranean rhythms.

In an interview with Al-Monitor, Qadri said her appearance at the opening ceremony is designed to convey a message of unity and aspirations for coexistence, “which are so essential to this region at this time." She said, "Of course I have my own agenda. I represent an entirely different world of music and accentuation intended to get across one clear message — that coexistence is the most important thing this place needs.”

Qadri added, “We were destined to be together, and none of us has anywhere else to go. That’s why I’m working vigorously to get this clear message through. I have always wanted to get to the biggest stages and now I am fulfilling this dream.”

She said that ever since she was a little girl at a kindergarten in Haifa, and after she moved with her family to the central Jewish-Arab city of Lod, she would make people listen to her sing and seek admiration and appreciation for her renditions. After graduating from high school, Qadri decided it was time to develop the singing career that she had always dreamed of. She performed at clubs and traditional Arab parties in Israel, and was also invited to perform for Sephardic Jews whose families came from Arab states. They liked her songs that reminded them of the places they had left behind before moving to Israel decades earlier.

Qadri first gained broader Israeli public acclaim in 2012, when she won a TV talent show hosted by Israeli pop idol Eyal Golan. Since then she has recorded two albums combining Arabic and Hebrew music, and has been dubbed “the diva of Middle Eastern music.” Even when she performs before Hebrew-speaking audiences, she makes no effort to conceal her Arabic accent.

As a singer who always dreamed of bursting onto the Israeli music scene and proving that despite being an Arab she can achieve Israeli public recognition and success by virtue of her wonderful vocal abilities, performing at the Israel Festival is the realization of a dream. Not only because it is one of the biggest and most prestigious stages for any Israeli performer, but also because it acknowledges her as an Israeli artist.

At the opening ceremony, Qadri will perform her hit song "Banadiq" (Arabic for “I am calling you”), as well as a medley of songs by famed Arabic singers Umm Kulthum and Farid al-Atrash and others, accompanied by the Firqat Alnoor Orchestra.

“True, I’m a little different. I don’t have a regular Israeli accent but a unique one that is my own. So what? It’s the same tune,” Qadri said. “I live like every other Israeli and I have a right just like every Israeli citizen.”

Her second album features the song "Slightly Different," a personal song written by Israeli songwriter Avi Ohayon and composed by him along with Asaf Tzruya. The Hebrew lyrics (in translation below) tell the story of a young Israeli Arab woman who aspires to be part of Israeli society and have equal rights as a citizen, but encounters hardship:

Qadri has been very busy since winning the Golan talent show. She was the first Arab singer to perform at the Israel Piano Festival in October 2015, and the same year she was invited to sing at the annual rally commemorating assassinated Prime Minister Yitzhak Rabin.

Her participation May 1 in the memorial event for fallen Israeli soldiers in Jerusalem was criticized by both Arab citizens and Jewish right-wing activists, who cursed her on social media and news websites. Those identifying themselves as Arabs considered her participation at the ceremony an attempt to flatter and grovel in front of Israeli Jews. Jewish talk back writers, on the other hand, saw her appearance at the event as a desecration of the fallen soldiers’ memory and a “sacrilege.” Qadri is unfazed.

“I am an integral part of Israel and I do what I think is right and fitting — if only to get across the clear message that I want us to live together,” she said. She did not respond to her critics. “I would rather answer everyone through my singing. I am trying to improve people’s negative image by using words and sounds.”

She said Arab Israelis in general encourage her and don’t bear her any grudges. “They are proud of me for bringing down walls and breaking the glass ceiling,” she said. “This motivates me to keep representing them by doing the thing I know best — making music.”

At the upcoming performance of the Israel Festival, Qadri will not be an Arab performer singing in Arabic or Hebrew. She will go on stage as a quintessentially Israeli singer who fuses both languages in her songs — to the glory of the State of Israel.