Turkey's referendum, which gave rise to fresh debate with the West, is also likely to affect Turkey's relations with the East, especially the Middle East. 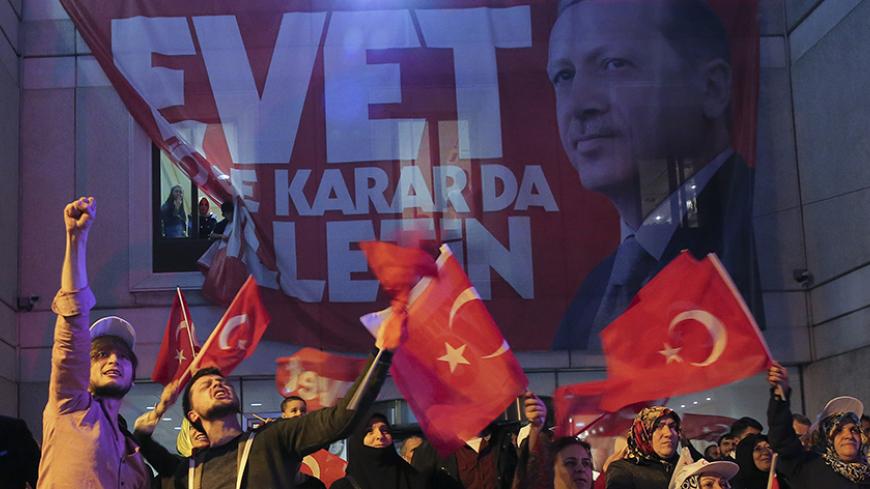 Turkish voters' narrow approval of an executive presidency April 16 will weaken the separation of powers, render control mechanisms useless and significantly influence the direction of the country's foreign policies.

The disputed 51% “yes” vote can't contribute to building new bridges to Europe. The amendments contradict the spirit of European Union criteria. Allegations by the Organization for Security and Cooperation in Europe that the voting was not just and transparent instantly produced a new breaking point in already-fragile Europe-Turkey relations. It certainly will not be easy for EU members to sustain their policy of keeping Turkey pacified.

President Recep Tayyip Erdogan, who has been declaring his struggle against the West's "crusader mentality" and its local affiliates, and who increasingly relies on nationalist rhetoric, may feel confident enough to further endanger Turkey’s accession to EU membership. He already displayed an ominous sign of his mindset about the EU in his remarks about reinstating capital punishment in Turkey as he was delivering his victory speech after the vote.

The referendum, which gives rise to fresh debate with the West, is also likely to affect Turkey's relations with the East, especially the Middle East.

There are still those in the region, perhaps not as many as before, who are mesmerized by what they see as Turkey's taking on the West, who praise Erdogan as the voice of the Islamic nation and who are indebted to Turkey’s support during the Arab Spring rebellions in 2011. In Turkey, pro-government media led by the state-owned Anadolu Agency unabashedly played up some congratulatory messages coming from this segment under the headline “World leaders congratulate Erdogan on referendum win.”

But who were these world leaders? Aside from the not-unexpected approval of Russia and the much-questioned congratulatory call from US President Donald Trump, positive responses from "world leaders" were notably lacking.

Other congratulatory messages arrived from the Muslim world. Ali Qaradaghi, the secretary-general of the International Union of Muslim Scholars, said, “I congratulate the Turkish people for their choice. I hope the Turkish government and people will continue to provide benevolent services to the Muslim nation.” From the Egyptian Muslim Brotherhood came, "The Turkish people have given a new lesson in democracy to the world.”

The most fervent praise of this controversial victory came from Syria. Sending greetings to Erdogan were rebel group Ahrar al-Sham, which was set up by some former notable al-Qaeda members; Hayat Tahrir al-Sham, part of al-Qaeda’s Syria extension Jabhat Fatah al-Sham (formerly Jabhat al-Nusra); Jaish al-Islam, linked to Saudi Arabia; and the Sultan Murad Brigade, which is controlled by Turkish intelligence.

Umran Muhammed, a press official for Ahrar al-Sham, wrote, "We wish the greatest success to our brother Erdogan and all those who strive for the advancement of Turkey and the Muslim world." The group's general command said, “This success is an important step that will help Turkey stand up against the injustice and cruelty in our region.”

Jaish al-Islam said, “We deeply congratulate our Turkish brothers and the government for their step toward independence and a strong Turkey.” Spokesman Ziad al-Attar of Hayat Tahrir al-Sham said, “What makes the Muslim Turkish nation happy, makes us happy. If they are saddened, we are saddened too. That they stood by Syrian people in their revolution is the best evidence of the strength of the Islamic kinship between two peoples.”

Most of the Islamist movements in Turkey also bestowed upon Erdogan the title "Leader of the [Muslim] Nation," which Erdogan very much enjoys.

In reality, the main reason for the credit Erdogan received from the Muslim world was his leadership when Turkey launched accession negotiations with the EU in 2005. Those taking the pulse of the Arab world in those days realized how a Turkey heading for Europe created excitement. This support withered in time and changed course after 2011.

The ruling Justice and Development Party (AKP), believing that the Muslim Brotherhood would be the sole alternative in the aftermath of the Arab uprisings, focused its attention on Islamist segments. The Syrian crisis drew Turkey in as the main supporter of Sunni-Salafi jihadi groups. Naturally, Turkey’s relations with the Islamic world shrank somewhat when Turkey began focusing mostly on the Sunnis and especially the Muslim Brotherhood. It now appears that those groups are rekindling their hopes with Erdogan.

But there are other facts of life that tell us Turkey's foreign policy can’t be reshaped by a simple affinity with the Brotherhood, and that aspirations such as leading the Muslim world will not pan out.

In distancing itself from the West, Turkey sees the value of partnership with Russia. Erdogan's senior adviser, Yigit Bulut, immediately after the referendum pointed to Russia as the way to go, saying, “We have to cooperate with Russia. Problems will definitely be solved.”

Russia also sees the amendments' approval as a positive outcome. President Vladimir Putin's press secretary, Dmitry Peskov, said, “The referendum is an internal affair of sovereign Turkey. Everyone must respect the decision of the Turkish people.” This was followed by Putin’s endorsement.

Turkey's partnership with Russia will soon become evident — in Syria. Although economic considerations led to improved Turkey-Russia relations, it appears Turkey must undertake a realistic change in its Syria policy. Not many expect Russia's approval of the referendum results to solidify confidence between the two countries.

A true honeymoon between Ankara and Moscow would require Turkey to coordinate its foreign policy approaches with Russia. What will most affect the harmony in their relations will not be the EU, but the attitude of the US administration under Trump.

Erdogan is expecting a new US approach from Trump. But there are indeed minefields in US-Turkey relations. Just to mention a few: continuing US support to Syrian armed groups fighting President Bashar al-Assad; finding a way to end the US partnership with Kurdish groups in northern Syria; legal cases involving the deputy CEO of Halkbank, Mehmet Hakan Atilla, and businessman Reza Zarrab, who bypassed the embargo against Iran; and Turkey’s demand that the United States extradite cleric Fethullah Gulen, who is accused of masterminding the July 15 coup attempt. Will the referendum results affect the course of these key controversies?

Erdogan may well have become the single ruler of Turkey. But though his tendency toward neo-Ottomanism is distancing Turkey from the West, it will not automatically open the doors in the East. Some limited Islamist segments might be excited by the process in Turkey, but one can't ignore that in many parts of the region, people fear the Ottoman legacy. Add to these concerns the extreme polarization in Turkey, and it is hard to claim that Erdogan has significantly expanded his room for maneuvering in foreign and domestic politics.