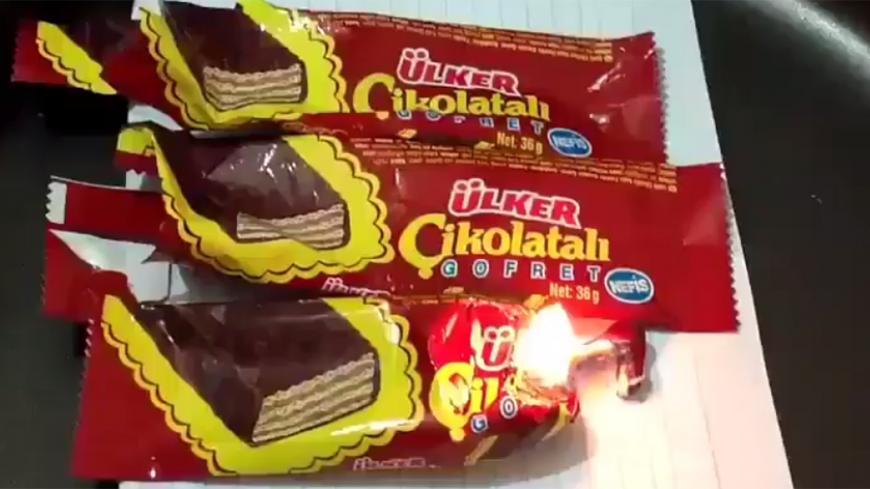 Ulker chocolate bars are burned in protest of an April 1 commercial by the company, which supporters of President Recep Tayyip Erdogan took as a signal of an impending military coup attempt, in this still from a video uploaded April 1, 2017. - Twitter/@cancananvatan

On the night of April 1, Turkey experienced a bizarre April Fools' Day joke. A television commercial by Ulker — Turkey’s giant food company especially famous for its sweets and chocolates, including Godiva — was perceived by the supporters of President Recep Tayyip Erdogan as a signal of an impending military coup attempt. Thousands of these supporters hit the streets, chanted for the beloved president and vowed to protect him against any attack. Other protesters burned or “hanged” candy bars made by the Ulker company and posted the scenes online, showing what they would do to the traitors.

All in all, the incident — hashtagged on social media by critics jokingly as #gofretdarbesi (“chocolate bar coup”) — indicated just how high-strung Turkey has become.

Ulker is one of Turkey’s most established food producers and can be compared to Nestle in its brand value and variety of products. The company, spread over the Middle East, is also a rising global star. It bought Godiva, the world-famous chocolate company, in 2007 and opened a coffee shop in the heart of London.

The Ulker brand also evokes a certain identity in Turkish society. The founder, the late Sabri Ulker, was a pious Muslim who gave the company a traditional reputation among Turkey’s conservatives. That is why during the hyper-secularist “post-modern coup” of the late 1990s Turkey’s hawkish generals discouraged Ulker products. I have personally seen Turkish secularists who would ideologically buy the products of Eti, another food giant, rather than Ulker, which they saw as “reactionary.”

When the conservative Justice and Development Party (AKP) came to power in 2002, the post-modern coup practically ended and companies like Ulker took a deep breath. Secularist bullying over the market seemed over. After the AKP’s first decade in power, however, another form of bullying began. This time the question was whether companies, especially big ones such as Ulker, were loyal to the persona of Erdogan, whose cult of personality was now the new game in town.

Ulker never fully failed this test, but never scored high on it either. Hard-core Erdoganists often complained that Murat Ulker, the company’s current CEO, had sympathies rather for Abdullah Gul or Ahmet Davutoglu — big names in the AKP who were sidelined, one after another, for not being 100% in line with Erdogan. Some even speculated that Ulker supported Gulenist organizations.

The April 1 incident took place against such a backdrop. It was triggered by a TV commercial by Ulker for April Fools' Day. It was a cartoon showing siblings in a family making mean jokes to each other, such as tying another up with ropes and kicking a soccer ball in the face, or putting a jalapeno pepper into a chocolate cake. It was, honestly, an unusual commercial with a bizarre voiceover and a storyline that was hard to comprehend. It also had threatening phrases such as “the day of reckoning is coming" and “get ready for April 1 surprises” (watch it here).

In a normal country living in normal times, the commercial would not have bothered anybody. In today’s Turkey, however, it took just a few hours for the commercial to create a firestorm. On social media, key pro-Erdogan accounts condemned the commercial as conveying secret messages about a new coup attempt. Accordingly, “the day of reckoning” was the coup day, and the “April 1 surprises” were plots that would happen that very night. The scene showing a child being tied up implied that Erdogan would soon be arrested, whereas the jalapeno in the chocolate cake signaled that Erdogan could be poisoned.

The people who became alarmed by these interpretations included not just young, enthusiastic supporters of Erdogan, but also famed opinion writers in the media and even parliament members. Thousands gathered at Kisikli, a neighborhood housing both Ulker’s headquarters and Erdogan’s Istanbul residence, and other urban centers to act as guardians of democracy. Ulker products were crushed, burned or hanged, and Murat Ulker, who was abroad and was taken by surprise — as he said in a tweet — was condemned.

To save itself, the company Ulker released a statement explaining that the commercial carried no political message whatsoever. It also suspended all the people who were involved in preparing the controversial commercial. However, a prosecutor has initiated an investigation into the company's advertisement.

Meanwhile, rival chocolate company Torku took advantage of the drama by joining the condemnations of Ulker, and received widespread support from pro-Erdogan social media users. Ulker is now out among conservatives, and Torku is in.

All of this drama — which is interesting in itself — is also as an indication of Turkey’s political psychology. For some reasons, none of those alarmed Erdoganists asked themselves why in the world a chocolate company would purposely get itself into major trouble by threatening the president of the country on TV. They didn’t think that there could be a mismatch between their perception and reality.

Their perception is also the mood that defines today’s Turkey, making it a risky place to be a public figure. There is a very strong sensitivity to conspiracies against Erdogan. Anyone can easily be misidentified as a pawn in these conspiracies by merely being critical or even just not supportive enough of the great leader.

There is, of course, a background to this paranoid mood. Turkish political culture has always been very distrustful, and two recent and interlinked traumas — the Gulenist infiltration of the state and the bloody coup attempt of July 15 — have made the new ruling elite quite suspicious about plots against their newfound power.

They need to see, however, that paranoia itself can be the next big conspiracy against Turkey. If an economic giant such as Ulker suffers from this incident, it will be another dent in an already-fragile economy. Turkey will be weakened not by heinous traitors — as they fear — but by overzealous patriots, as is often the case.