Rumors that Turkey's largest food producer could be targeted in the government's post coup-attempt crackdown are eroding investor confidence. 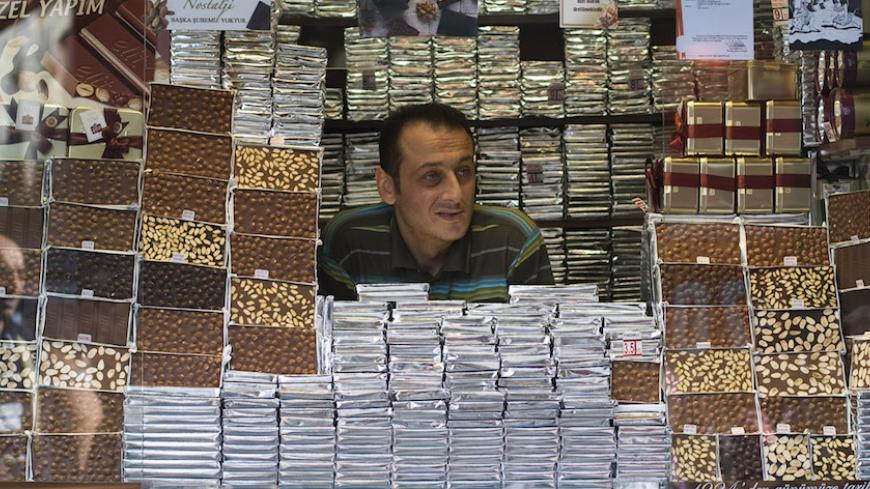 A chocolate seller awaits customers at his booth in Istanbul, Sept. 22, 2009. - REUTERS/Morteza Nikoubazl

“Good morning, time to buy,” tweeted Murat Ulker, the CEO of Yildiz Holding, Turkey’s largest food producer and the world’s third-largest snack manufacturer. After those words today, the tycoon proceeded to snap up 100,000 shares in Ulker, a Yildiz subsidiary.

Some would view Ulker's move as business smarts, others as an act of defiance. In any event, Ulker, seemed determined to show faith in his own brand after a columnist for the pro-government Sabah suggested that Yildiz would be the next conglomerate targeted for alleged links to Fethulllah Gulen, the shadowy Sunni imam whom the Turkish government has accused of masterminding the July 15 coup attempt.

Dilek Gungor’s sensationalist piece hinting that Yildiz might have a large, “hidden” stake in Kaynak Holding, a Gulen-linked group of companies whose assets were seized last week, sent shares in three of Yildiz’s subsidiaries, including the flagship biscuit maker Ulker, tumbling by 12% on the Istanbul stock exchange.

Yildiz swiftly rebuffed claims that it has been implicated in the proceedings against Kaynak. The group said in a statement that it had “nothing to do” with the probe. Ulker similarly tweeted, “Dear investors, beware. There are those who are sowing panic for no reason. We remain unsullied [and] our business is clean. We continue to work.”

There is no evidence of any legal action linking the company or Ulker to Gulen. For all Ulker's bravado, however, the famously humble magnate whose star-studded stable of brands includes Godiva chocolates and McVitie’s biscuits, must have been rattled.

In one ominous sign, Yigit Bulut, President Recep Tayyip Erdogan’s controversial economic adviser, warned in a column for the pro-government Star against the carcinogenic effects of various ingredients used to produce chocolate and biscuits. Bulut did not mention Ulker by name in the piece headlined “Those who love their children should read this.”

The online portal Duvardibi.tv, however, reproduced Bulut’s column under the headline “Protect your children from Ulker.” Duvardibi.tv is thought to be run by a clique of Erdogan loyalists, and its main function apparently is to smear the president’s real or perceived opponents. Recent victims include Ahmet Davutoglu, the former prime minister, and Abdullah Gul, the former president. The main target of the site’s steady stream of salacity is Gulen.

It remains unclear why Ulker, a pious Muslim and poster boy for Turkey’s expanding global heft, is being picked on. Much like his father, Sabri Ulker, a migrant from the Crimea Peninsula who founded the business in 1944, Murat Ulker has avoided being sucked into the byzantine world of Turkish politics. Regardless, the Yildiz group was targeted by the army in the mid-1990s when the ruling generals launched their crusade against alleged “green” (i.e., Islamic) capital, calling for a boycott of its goods.

Yildiz Holding survived, going on to become one of the pioneers of corporate social responsibility in Turkey. In 2014, the group donated $24 million to Harvard University’s School of Public Health.

One London-based financier, who requested anonymity, speculated that the most likely reason Ulker is being attacked is because the company is not viewed as being sufficiently subservient to Erdogan. All of this is eroding investor confidence.

At least 600 companies with assets totaling approximately $14 billion are said to have been shut down on charges that they helped oil Gulen’s opaque network of schools and media outlets. They include the mid-sized Bank Asya, the famous baklava chain Gulluoglu and a fertility clinic founded by an Armenian doctor.

“While property rights are well-defined, they are no longer enforced,” observed a European banker who spoke to Al-Monitor on condition of anonymity. “There is no more rule of law in Turkey. It’s straight out of [Russian President Vladimir] Putin’s playbook. Erdogan is creating his own oligarchs.”