Prime Minister Erdogan's appointment of Yigit Bulut to focus on the transition to a presidential system has generated controversy and criticism. 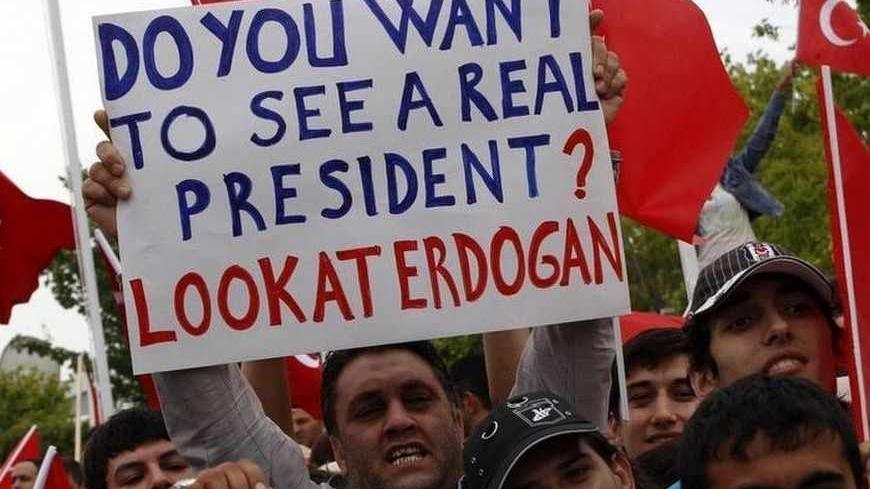 Supporters of Turkey's Prime Minister Recep Tayyip Erdogan wave flags, hold banners and shout slogans as they wait for his arrival at Esenboga Airport in Ankara, June 9, 2013. Still by far the country's most popular politician, Erdogan has pressed ahead with government business as usual. - REUTERS/Umit Bektas

There are no jokes. Struggling to find a single example for an untendentious joke, Sigmund Freud famously gave up and instead invited us to see the truth spoken in each and every jest. Whether one agrees with the Viennese master’s general theories or not, politics proves him right on jokes: One might find an abundance of things to laugh about in the political realm, but nothing ever is just a jest.

Turkish Prime Minister Recep Tayyip Erdogan’s recent decision to make Yigit Bulut, the 41-year-old managing director of the pro-government channel 24 TV, his chief adviser is no joke either. Notwithstanding the anger, disbelief and ridicule of those who see in Bulut’s appointment the perfect example of unabashed toadyism being rewarded at a time when critical voices in the Turkish media are silenced (fellow Al-Monitor contributor Yavuz Baydar lost his job this week at the pro-government Sabah after criticizing his paper’s flimsy coverage of the recent mass protests in Istanbul), Erdogan’s choice reflects a keen political calculation rather than the lack thereof.

A man with a catchy name — Yigit means “gallant” and Bulut is “cloud” — that brings to mind the symbol-laden use of Native American nomenclature in popular westerns, Erdogan’s new chief adviser comes from a secular background of wealth and influence that sets him apart from the typical Justice and Development Party (AKP) rank and file. Reportedly fluent in French and English, he was educated at Istanbul’s prestigious Lycée de Galatasaray, received a degree in banking and finance from the Bilkent University and did his graduate studies at the Sorbonne. His family hails from Edirne — Turkey’s Thracian gate-city where voters are characteristically wary of the AKP, which managed to gain only 30.4% of the popular vote in 2011, coming a distant second to the main opposition Republican People’s Party (CHP).

Bulut has not only the typical Balkan features of the region with fair skin, blue eyes and broad bones but also a surname that represents the traditional politics of his hometown, which is known for its staunch support of the legacy of the Democrat Party — Turkey’s first popular opposition party, ousted from power by the country’s first coup d’état. Bulut’s late father and uncle were elected to the parliament from various secular right-wing parties which have all but disappeared from the political scene today.

No part of this background, however, was at issue when Bulut’s new job was announced. Turkish opinion-makers knew the man too well to look at his biography. Indeed, Bulut’s newspaper columns and TV commentary from 2007 onward have been a testament to the evolution of a young financial analyst with nationalist rhetoric from an Erdogan-basher to an Erdogan-worshipper.

As appealing as it is to interpret this as a spectacular U-turn, a closer reading of Bulut’s columns then and now indicate that it is not so much the chief adviser who shifted position but the prime minister himself. Bulut, for his part, has persistently been skeptical of the European Union, and it was the Erdogan who was vividly leading pro-EU reforms from 2003 to 2009 that he used to rage against. At a time when liberal democrats in Turkey raised their voices to protest the Kemalist establishment’s closure case against a reformist AKP, Bulut applauded the prosecutor’s move: “The state said ‘enough’ to the government,” he wrote. “It is time to establish a new national will.” After 2009, as Erdogan gradually distanced himself from the EU perspective and hit the brakes on reforms, once supportive liberal democrats became his toughest critics while his former opponent Bulut joined the ranks with unmatched fervor.

“Unmatched” is not a figure of speech here, as Bulut did not satisfy himself with relatively mundane activities such as openly rooting for self-censorship by the media or accusing the Gezi Park protesters of being co-conspirators of foreign intelligence agents.

It is not common for a politician to hear from a TV manager that he would die for him, but before Bulut actually said this upon his appointment, he had made an even more romantic statement on March 11. He declared, “If Erdogan wears the shroud, I would wear it, too.” It is rare that a journalist would call a democratically-elected contemporary leader “my forefather,” but Bulut did just that by calling Erdogan “atam,” a form of address that is exclusive to Turkey’s founder Ataturk in official rhetoric. And then, of course, there was Bulut’s June 15 declaration on live TV that he knew there were people around the world at work trying to kill Erdogan with remote impact methods such as telekinesis.

So when Bulut was named Erdogan’s chief adviser merely three weeks later, critics did not need to look far beyond this outrageous statement. “Telekinesis” became a codeword for ridiculing the prime minister’s judgement. Der Spiegel ran an article labeling Bulut a conspiracy theorist and Turkish columnist Ahmet Hakan wrote in Hurriyet, “When a government weakens its ties with rationality, it strengthens its ties with the likes of Yigit Bulut.”

But is Bulut really an irrational choice? Is Erdogan merely crowning adulation with this appointment? Or does he see a specific role for Bulut to fulfill? I was unable to get answers from Bulut to my questions, but after re-reading his recent columns and listening carefully to what several AKP insiders have been saying publicly and privately after the Gezi Park protests, I realized Bulut’s outspoken embrace of the virtues of the presidential system clearly added to his value for the prime minister. Bulut was writing as early as May 2012 that “this land’s rightful due can only be given by the presidential system,” but now he sees the transition to presidentialism as the only way out of what he views as dooming conspiracies of chaos. On July 5, only four days before his appointment was announced, Bulut said in a column that after the coup in Egypt and “the coup attempt” in Istanbul, presidentialism had become “a must for Turkey.”

At a time when even some of Erdogan’s very close supporters fear that insisting on a form of presidentialism might add to the polarization in the country and fuel a new round of mass protests, Bulut stands rather firm and is always ready to offer his well-rehearsed rhetoric to make the case for a more powerful presidency. Erdogan felt the need this week to say, “Presidentialism is not our red line,” but he is yet to make a statement to indicate that he has given up on the idea. Perhaps he never will.

As a sharply-divided Turkish electorate gears up for the 2014 presidential elections in which Erdogan is the undeclared forerunner, the Prime Ministry has found in Bulut an unflinching voice for presidentialism that can break on cue into a much needed pep talk to the doubting AKP bureaucrats. And that should be music to his boss’ ears!

Yasemin Çongar is the author of four books in Turkish, including Artık Sır Değil (No More A Secret), a detailed analysis of the US diplomatic cables on Turkey first made public by WikiLeaks. A former Washington bureau chief of Milliyet (1995-2007) and a founding deputy editor-in-chief of Taraf (2007-2012), Çongar is based in Istanbul and a columnist for the Internet newspaper T24.