Turkish Prime Minister Recep Tayyip Erdogan’s trip to Berlin was a political show for his audience back home and is not likely to affect Turkish-German relations. 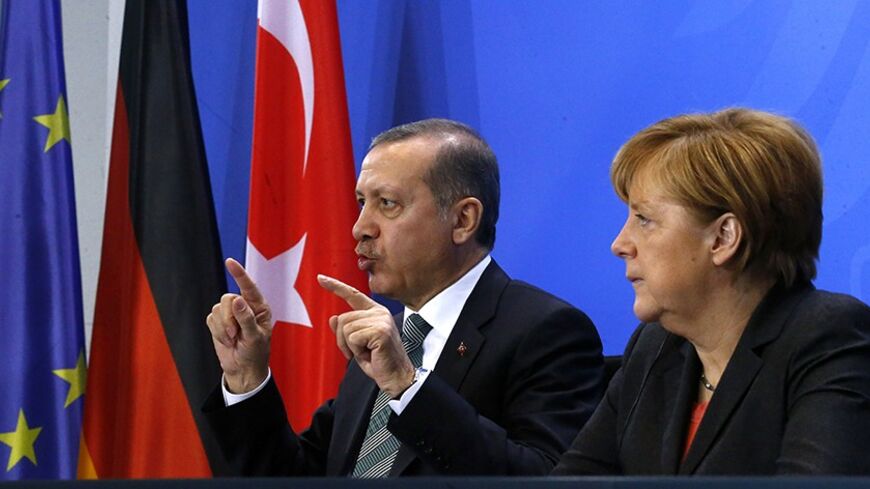 One of Turkey’s most popular columnists, Hurriyet's Ahmet Hakan, in his Feb. 3 column posed questions for German Chancellor Angela Merkel. Hakan wrote, “I am asking bluntly without beating around the bush: Are you furious because the giant third airport to be constructed in Istanbul will be bigger than your Frankfurt airport? Do you want to cause unrest in Turkey just to stop Turkey from building an airport bigger than yours? Please tell us openly: Are you uncomfortable with the growth of Turkish Airlines? Are you doing whatever you can to curtail that growth?

"Did you provoke the Gezi protests? Are you behind the Dec. 17 [corruption probe]? Are you doing whatever you can to sink Turkey?”

These questions, which would sound spooky to anyone not following domestic happenings in Turkey, were significant in their context and timing. Prime Minister Recep Tayyip Erdogan, accompanied by a large delegation, traveled to Berlin Feb. 3 to meet Merkel, one of many agenda items in his loaded schedule. His delegation included a “conspiracy theoretician” who had concocted incongruous theories during the 2013 Gezi Park protests. To some they were ridiculous, to others fantastical and even funny. Economic affairs writer Yigit Bulut had blamed Lufthansa for the Gezi protests, explaining that the third airport planned for Istanbul would become a major hub, causing Frankfurt's airport to lose eminence. Naturally, Lufthansa would then lose ground to Turkish Airlines. Hence, he concluded, the decision to have Merkel push Turkey to instability and block the construction of the third airport.

Thus, a German hand was discovered behind the Gezi protests. The reasoning was that the Gezi protests, the first-ever serious challenge to Erdogan’s rule in Turkey, were a German scheme to curtail Turkey’s potential to economically compete by prodding it to instability.

The same writer had also accused Westerners of planning to assassinate Erdogan by telekinesis.

No problem until this point. In every society, at times of turbulence, there will be people who utter weird-sounding ideas. The issue here is that the person who rose to prominence with such ideas was appointed Erdogan's “head adviser” immediately after the Gezi events.

That the popular Hurriyet columnist, a former Islamist who had the opportunity to know Erdogan closely in the 1990s, asked these questions on the day Erdogan went to Berlin was no coincidence.

Another well-known Hurriyet columnist, Ertugrul Ozkok, who for more than 20 years had served as the editor-in-chief of the newspaper when it was the touchstone of the Turkish media, drew attention to another interesting observation in his Feb. 4 article. Erdogan’s delegation, in addition to Bulut, included former deputy prime minister and EU Affairs Minister Egemen Bagis, who had to resign recently over corruption allegations. Bagis was once the chief negotiator with the EU, but also lost that title with his resignation.

Bagis, just like Bulut, is considered a close associate of Erdogan as he throws his darts toward Germany. He was the controversial author of not-so-diplomatic remarks before the German general elections: “When she loses the elections, Merkel, too, will go fishing like [former French President Nicolas] Sarkozy."

Merkel won in the elections with a large margin, but Bagis lost his seat. Nevertheless, Erdogan took his close associates with him to Berlin, one the author of incredible theories and the other the open mocker of Merkel.

Some might see this move as defiance by Erdogan, while some others might see it as apologetic gesture. Which one?

The answer could be detected by observing Erdogan in Berlin. Ozkok, too, was there. Because Erdogan had not taken with him any journalist he deemed opposition, Ozkok was assigned to cover the visit for Hurriyet’s German partner Bild, and had checked into the same hotel as the prime minister. Ozkok listed the names of newspapers whose representatives Erdogan did not take with him and said there was no one from the mainstream media in the delegation. He concluded that 75% of the Turkish media was not represented on the Ankara-Berlin flight.

At least six TV channels transmitted live each speech by Erdogan in Berlin — four in one day — and we were able to get a fair idea of how the visit went.

Which Erdogan was in Berlin? The Erdogan who accuses Germany of being behind all the events in Turkey, above all the Gezi protests, or a version ready to apologize and try to find a way out of his international isolation in Europe’s strongest country?

Neither. A bit more of the former, perhaps, but basically, we watched an Erdogan who had brought his election campaign to Berlin for two days, to its 200,000 Turkish residents and Germany's 3 million Turks. The tensions and harsh polemics in Turkey were thus relocated to Berlin.

There was no spillover into Turkey-Germany relations, which appeared unchanged from what they were before Erdogan came to Germany.

Attributing the Gezi events to Germany was a litmus test of the differences between the parties. In his Berlin statements, Erdogan did not deviate a bit from his earlier assessments on Gezi and the corruption probe. For him, there was no wrongdoing, only an effort to stage a coup against his rule.

But Merkel made sure everyone understood the differences between the two. She spoke of “debates in Turkey,” saying, “About the Gezi Park protests, I had said this was a basic right. Protest is a basic right. Each country most solve its own internal problems.”

For Erdogan to pass this test successfully, he has to mend the wounds inflicted on him by the probe that he blocked with his executive powers and convince the Turkish public that there was indeed a coup against him. It looks unlikely that he will persuade the outside world.

It is doubtful that he was able to convince his German audience, not that he cares these days. He is fully focused on how many votes he will get in the elections. That is why the Berlin trip was a domestic political road show. Turkey-Germany relations were not even on the back burner. Turkey’s foreign policy in the first quarter of 2014 is entirely a domestic political issue.