The Gezi Park protest brought Turkey-EU ties to the brink of collapse, but at the same time had the impact of “electroshock therapy” on Turkey’s stalled accession process. 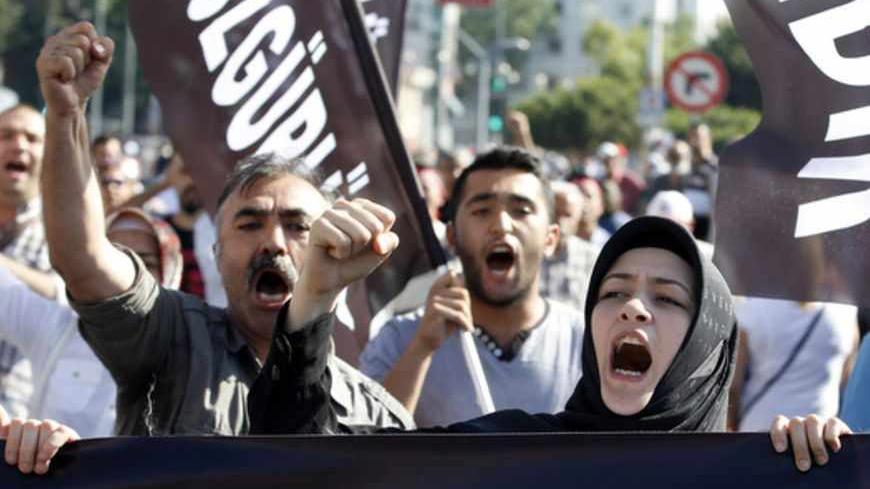 “Turkey does not need the EU, but the EU needs Turkey. If need be, we know very well how to tell those countries, ‘Buzz off, mate!’ The EU needs Turkey more than Turkey needs the EU.” Those sharp words belong to Turkey’s EU Minister Egemen Bagis. And they were not uttered in a casual chat. The statement was relayed to journalists by Bagis’ press office on June 19 under the title “If need be, we’ll tell EU countries ‘Buzz off, mate!’”

In a second statement that arrived shortly thereafter in my email box, Bagis reminded German Chancellor Angela Merkel of former French president Nicholas Sarkozy’s electoral debacle after she signaled she would block the opening of a new chapter in Turkey’s membership talks.

"Merkel's attitude is obviously a means of domestic politics ahead of the German elections in September," he said. "Merkel seems to have forgotten the fate of Sarkozy, who was known for his objections to Turkey. I invite Merkel to think again, unless she wishes to go fishing with Sarkozy.”

Those statements further angered the Germans, who were already terrified by the sight of Green Party leader Claudia Roth being gassed in a police attack on Gezi Park. Bagis, in a belligerent mood toward the EU ever since the accession process became deadlocked, may well deserve the title of “EU Quarrel Minister” rather than EU minister.

The police violence during the Gezi Park protests and Prime Minister Recep Tayyip Erdogan’s portrayal of the unrest as a foreign-instigated coup conspiracy and of the protesters as “pawns” came as the last straw in the three-year stalemate in Turkey’s accession talks.

Erdogan harshly rejected the criticism of the European parliament, the European Commission and EU member countries, especially Germany. The row sparked diplomatic tensions, with Ankara and Berlin exchanging warnings by summoning each other’s ambassadors. Ankara went as far as to consider the option of suspending political ties with the EU, as it did in 1997.

Eventually, Turkey opted to scale down its rhetoric, while Berlin moderated its position to what German politician Guido Westerwelle described in the following remarks: "On the one hand, we cannot pretend as if these [membership] talks here were happening without any context, as if the past days hadn't existed. On the other hand, we also have to see that our joint, general, strategic and long-term interests are upheld."

As a result, the EU General Affairs Council, meeting in Luxembourg, drew up a compromise formula that would keep the train from derailing. It agreed in principle to open fresh talks — on Chapter 22, concerning regional policy — but delayed the formal launch of talks until after Oct. 9, when the European Commission will present a progress report on Turkey. Depending on the report, the EU leaders will set a date for the talks. The decision effectively means that the EU has an intention to resume the talks, but at a yet unknown time.

For some reason, this outcome led to a somewhat victorious mood in Ankara, with Foreign Minister Ahmet Davutoglu commenting, "Chapter 22 has been opened. The issue is closed. A review of this decision is out of the question. Only the dates of certain procedural and ceremonial meetings will be determined later.”

The decision, however, means much more beyond the technical terms. It informs the process on improvements in human rights and places Turkey back under scrutiny. Hence, Austrian Foreign Minister Michael Spindelegger said the EU had given Turkey a "probationary period” for how it handles basic rights for citizens, including free speech and the right to demonstrate. The messages of other EU ministers, too, focused on concerns over the government’s treatment of the Gezi protesters. This means the progress report will determine how EU leaders proceed.

Turkey’s reactions to progress reports have become increasingly defiant in recent years amid growing self-confidence both at home and abroad. But one point needs to be acknowledged: The progress reports may have sounded patronizing to Turkish leaders, but they did serve as pressure to enact reforms. Therefore, the renewed emphasis on the reports could put the brakes on the government’s increasingly authoritarian tilt.

Even though the decision to open a new negotiating chapter keeps Turkey anchored, it hardly amounts to a breakthrough removing all obstacles down the EU road. Similarly, an eventual failure to launch the talks would not amount to the demise of Turkey’s membership prospects. No matter which possibility materializes, the EU project will remain on the table for Turkey, and sooner or later the process will again come back to the essential deadlock, which is the Additional Protocol of the Customs Union Accord.

Since the accession negotiations kicked off in 2005, Turkey has opened talks on 13 of the 35 negotiating chapters, with only one completed so far.

Due to Turkey’s refusal to implement the Additional Protocol for Greek Cyprus, eight chapters have been frozen, while those opened cannot be closed. The deadlock is unlikely to be resolved unless Turkey opens its air and sea ports to Greek Cypriot use.

Since the process hit a stalemate, the Turkish government has opted for the easy route of putting the blame on the EU, using the pretext that “obsolete" Europe does not really want Turkey in.

Indeed, it was the AKP government that extended the customs union pact to Greek Cyprus through a government decree on Oct. 2, 2004. It was the same AKP that boasted about Turkey being part of the EU family picture — along with the Republic of Cyprus — at the signing ceremony of the European Constitution on Oct. 29, 2004, in Rome.

And then on July 29, 2005, Turkey effectively recognized the Republic of Cyprus by signing the Additional Protocol that extended the existing Turkey-EU customs union to the 10 new EU members. Turkey’s unilateral declaration that “The protocol does not amount to a recognition of the Republic of Cyprus” means nothing for the EU once accords are formally signed.

Not surprisingly, Merkel touched the sore spot this week, saying, “We must make progress on the issue of the Ankara Protocol — that is actually the most enduring barrier," at the Turkish-German Chamber of Commerce in Berlin on June 24.

To sweeten the pill of the Additional Protocol, Turkey had counted on progress in the Cyprus peace process. Unfortunately, the Greek Cypriots voted down the reunification blueprint known as the “Annan Plan.” Moreover, international restrictions on the Turkish Republic of Northern Cyprus remained intact even though Turkish Cypriots had voted in favor of the settlement plan. This led Turkey to return to its old policy.

As retired ambassador Ozdem Sanberk pointed out on June 24 on CNN Turk television, the core problem is Ankara’s failure to recognize that it is Turkey which needs the EU and not vice versa.

The Turkish bid for EU membership was originally driven by an impulse to keep up with Greece. Turkey has yet to get rid of the mindset that marked that first page of a long story. Hence, the Sevres syndrome easily grips Turkey at each difficult juncture. Erdogan’s countless outbursts that “If not the Copenhagen criteria, we’ll go ahead with the Ankara criteria” reflect both that syndrome and an explosion of self-confidence.

Another alarming development that weakens hope for a fresh start with the EU is the judicial probe launched into the Gezi protests. The prospect of the probe degenerating into a “terror case” of legal scandals is a source of serious concern.

True, the government now feels less need for the EU in terms of using EU pressure as a tool to curb the military tutelage. However, it is not yet so powerful it can throw the European integration project into the dustbin — neither politically nor economically. Everyone is aware that foreign investment, including Arab capital, has flowed to Turkey thanks to the image of stability the country acquired with the start of EU accession talks. The decline of the EU perspective will have a negative impact on ties not only with the West but also with the Arab world, an outcome the AKP could hardly ignore.