The EU's Mixed Report on Turkey

The chill between the EU and Turkey continues as the annual progress report by the EU Commission attempts to keep a delicate balance between criticism and encouragement. 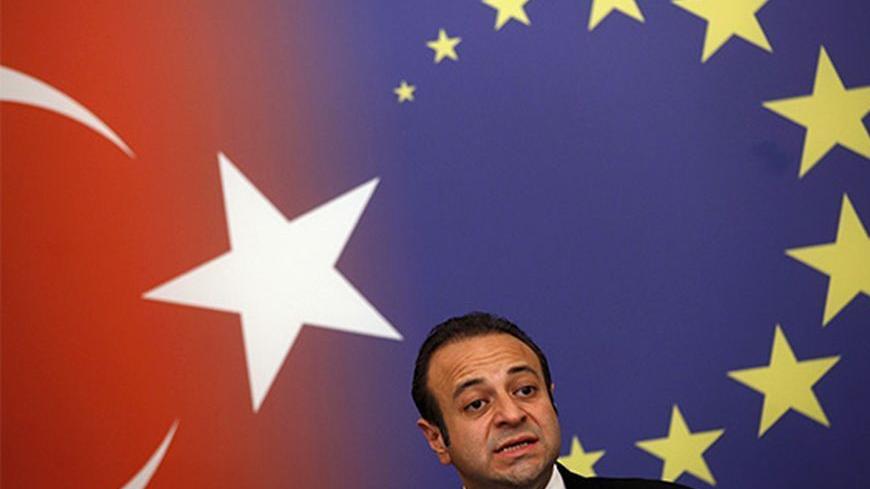 Overall, the report's findings are not expected to help accelerate Turkey's membership process into the EU, but should be seen as a balancing act to keep the process from derailing.

Not surprisingly, the report has been received in a cool fashion by Ankara. Egemen Bagis, Turkey's chief EU negotiator, refused to comment on the report, complaining that the commission insisted on releasing it during the Muslim holiday, Eid al-Adha. "Because it was published against our wishes during a religious holiday, I decided not to comment about it until after it is over," he said, adding, "Our country is in its most transparent period yet, but it is not that we do not have problems."

Bagis, who despite his title is keen to be seen as a Euroskeptic, recently told the Daily Telegraph that Turkey would never become an EU member.

This year's report drew attention because it tracks several key issues and developments in the country, including: the Kurdish peace process, launched Jan. 1; Gezi Park protests in the heart of Istanbul; growing tension and polarization in society; persistent debate on pluralism vs. majoritarianism; rising pressure regarding the media; and lowered thresholds for the accountability of state finances and the two recent democracy packages.

Aside from the "piecemeal" reform menu, the report points out in detail how the ruling Justice and Development Party (AKP) government has come up short in meeting the norms required for progress toward full membership.

The report emphasizes what it calls "the pressing need to develop a truly participatory democracy, able to reach out to all segments of society, as well as the clear requirement to further amend criminal legislation and reform its interpretation by the courts so as to ensure respect for fundamental freedoms."

Chapters on freedom of assembly and speech, as well as media independence, are the most critical ones in the text. One highlight, as predicted, is the events surrounding the Gezi Park events and the behavior of security forces.

"Overall, the demonstrations were peaceful, despite the involvement of a small number of violent protestors," states the report. "At several instances the police used excessive force against demonstrators. Six people died, including one policeman, thousands were injured, some of them severely, over 3,500 were taken into police custody, of whom over 112 remained in detention on judge’s decision."

The chapter on Gezi Park events concludes: "Turkish legislation and its implementation concerning the right to assembly and intervention by law enforcement officers are still to be brought further in line with European standards, which focus on the peacefulness of demonstrations. Improvements in the legal framework need to be complemented with appropriate training for law enforcement officers.”

On freedom of expression, the report notes some progress regarding the legal framework, but adds that problems remain, including "continued pressure on the media by state officials, widespread self-censorship, the firing of critical journalists, frequent website bans and the fact that freedom of expression and media freedom are in practice hampered by the approach taken by the audio-visual regulator and the judiciary."

The report emphasizes threats to the Turkish media's independence: "Statements of state officials had a chilling effect and instigated investigations by public prosecutors. Moreover, state officials themselves continued to launch suits against critical journalists and writers. This, together with the high concentration of media ownership in the hands of industrial conglomerates with interests going far beyond the free circulation of information, continued to lead to widespread self-censorship by media owners and journalists. In particular, the mainstream media hardly reported on the Gezi Park protests in early June. Columnists and journalists were fired or forced to resign after criticizing the government. As a result, freedom of the media remained restricted in practice."

The report also highlights how:

After signing the Ankara Treaty in 1963, EU accession negotiations with Turkey began on Oct. 3, 2005. In total, 13 out of 33 negotiation chapters have been opened and one chapter has been provisionally closed. As a result of Turkey not having fully implemented the additional protocol to the Association Agreement, the EU decided in 2006 that eight negotiating chapters could not be opened and that no chapter could be provisionally closed until Turkey meets its obligations on Cyprus.

Despite the considerable dosage of critique, the report is seen as likely to pave the way for opening a new chapter, as was decided in the early summer, before the dust of the Gezi protests had settled.

But there are signs of concern at home. A new study conducted by the German Marshall Fund has shown that Turkish support for EU membership was at an all-time low since the negotiations began: a current 44% as compared with 74% three years ago. Most of the Turks blame France and Germany for the foot-dragging and for using Cyprus as a tool for blockage. Others point to the economic crisis in Greece and the overall stagnation in the EU.

An equal proportion of criticism is directed at the ruling AKP and the opposition. Lately, Prime Minister Recep Tayyip Erdogan seems to have lost all appetite for reforms and the membership process, as some of his key ministers, such as Economy Minister Ali Babacan and Justice Minister Sadullah Ergin, push for a forward agenda.

Joost Lagendijk, a former Green MP of the Netherlands and a pundit monitoring Turkey, writes on Oct. 13 in Today's Zaman that "a form of schizophrenia" can be found among leaders of the ruling party, leading to a "weird situation."

"While some government ministers keep finding pleasure in distancing Turkey from the rest of Europe, some of their colleagues are doing their utmost to convince the same Europeans that they should consider Turkey's interests in the construction of new regional and global arrangements," he continues.

Yet there are experts who still see the light at the end of the tunnel. "To me, pluses seem to have weighed more than minuses there," Emre Gonen, a member of the political science faculty at Bilgi University of Istanbul, told Al-Monitor.

"The commission is clearly frustrated that the EU members cannot agree among themselves on opening more chapters and it shows in the text. But whether it will have any effect is hard to foresee. Even half-hearted steps by Turkey are depicted as steps on the right track, except the government's attempts to subordinate the autonomous monitoring bodies of the state."

"But let me say it clearly: If the EU-Turkey relations will have to develop only according to the wishes of some members, this can completely close the gates of hope."