Influential voices in Turkey are worried about the impression that Turkey and the EU are drifting apart and what this will do to Turkey’s political reform process. 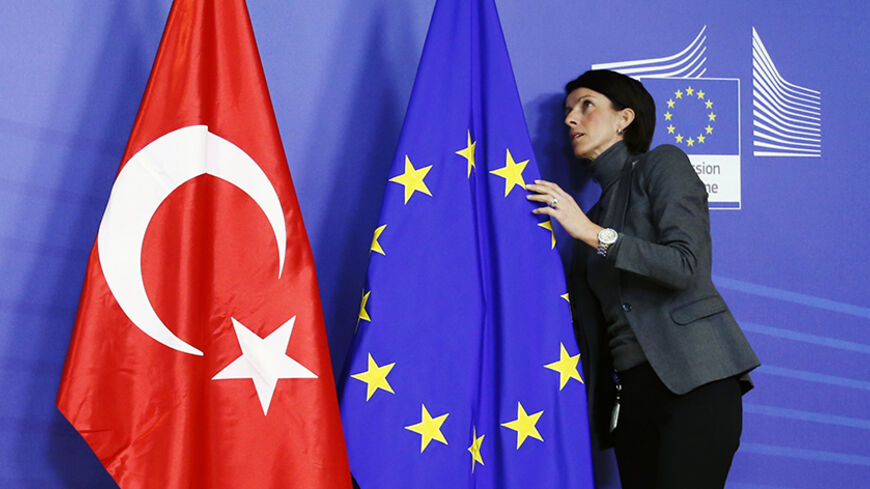 A staff member adjusts European Union and Turkish (L) flags ahead of the arrival of Turkey's Prime Minister Recep Tayyip Erdogan (not pictured) at the EU Commission headquarters in Brussels, Jan. 21, 2014. - REUTERS/Francois Lenoir

Given the current turmoil along Turkey’s eastern borders, many have forgotten that Ankara is still technically vying for EU membership. This bid, however, remains in the doldrums due to a combination of factors involving Turkey and Europe.

At the beginning of the year, hopes were raised that the recent stagnation in Turkish-EU ties could be overcome. President Recep Tayyip Erdogan, then prime minister, even said in January 2014 that the coming year would mark a historic turning point in ties.

But, as the year comes to a close, there is little to prove him correct. Recent remarks by Haluk Dincer, head of the influential Turkish Industry and Business Association (TUSIAD), show that the situation has actually worsened.

Addressing a Nov. 20 conference organized with the Brookings Institution in Istanbul, Dincer said that hopes were fading for Turkey’s EU membership, unless the current state of affairs changed.

“We are deeply worried about the impression that Turkey and the EU are drifting apart,” Dincer said, stressing the important role that Ankara’s EU bid played in Turkey’s past political reforms. “Turkey’s active foreign policy in its region and toward its neighbors was based on its position as a soft power, its secular democratic system and its EU perspective.”

The 2013 Gezi Park protests and the corruption scandal that hit the government later that year, represent turning points with regard to Turkey’s reform process. The European Commission’s 2013 and 2014 progress reports on Turkey, which evaluate the state of Ankara’s membership bid, also corroborate this.

The 2013 report tried to present a balanced picture by welcoming Ankara’s efforts to solve its perennial Kurdish problem by democratic means. It also underlined the continuing implementation of previous political reforms.

It was, however, highly critical of anti-democratic developments following the Gezi protests. It said that the government, which was led by Erdogan at the time, “tended to rely exclusively on its parliamentary majority to pass laws and decisions … without sufficient consultation and dialogue with stakeholders.”

Pointing out that there was “excessive use of force by the police, polarizing language and an overall absence of dialogue” during these protests, the report added that Turkey needed to urgently tackle these issues to bring the country up to par with EU standards.

The 2014 Progress Report, on the other hand, while also trying to be balanced, was also full of harsh criticism for Ankara, this time with regard to how the government handled corruption allegations. It said the government’s response to these allegations had “given rise to serious concerns regarding the independence of the judiciary and separation of powers.”

The report added that “attempts to ban social media, later overturned by the Constitutional Court, and pressures on the press leading to a widespread self-censorship, reflect a restrictive approach to freedom of expression.” The government rejected such accusations, of course, accusing the EU Commission of “bias,” and “failing to consider the full picture.”

Recent developments, however, show that Turkey is poised to continue regressing in terms of EU standards. New security legislation, for example, that the government is preparing to introduce is considered to be draconian and highly restrictive in terms of individual rights, as Pinar Tremblay’s Oct. 24 post for Al-Monitor indicates.

Prime Minister Ahmet Davutoglu claims that the proposed legislation complies with EU standards, but critics in Turkey and Europe reject this and say it will not only set Turkey’s reform process back, but will also harm Ankara's ties with the EU.

Another potential problem is Erdogan’s desire to turn Turkey into a presidential system. General elections planned for June are critical in this respect. The Justice and Development Party (AKP) wants results that will enable the party to alter the constitution on its own and enable Erdogan to become an executive president who is unencumbered by checks and balances.

Erdogan’s commitment to the political criteria necessary for EU membership is already under question.

Many recall his asking Russian President Vladimir Putin in November 2013 to admit Turkey to the Shanghai Cooperation Organization to save it from the slow and painful EU accession process, as he put it. Erdogan's recent remark that it is unnatural to consider men and women as equals has also left many questioning his commitment to EU values.

On the European side of the equation, key EU members, most notably France and Germany, have been less than welcoming as far as Ankara's membership bid is concerned, arguing that Turkey is not a European country and should therefore not be given full membership.

France has even blocked chapters of Ankara’s membership negotiations that pertain to full membership. Meanwhile, Cyprus, as a veto-wielding EU member, continues to block key chapters in Turkey’s membership talks in an effort to try and solve the Cyprus problem according to its national interests.

Turkish opponents of EU membership use these developments to argue that Ankara should ditch the EU and look elsewhere for strategic partners. Erdogan’s remarks about the Shanghai Cooperation Organization also emboldened them in this regard. Looked at superficially, such views appear justified.

Some influential Turkish voices, however, starting with former President Abdullah Gul, sense a red herring here. Gul has always supported the view that the EU perspective is important, as it is a positive force for reforms in Turkey.

He has indicated that this is the real gain for Turkey, regardless of whether there is full membership at the end of the line or not. Gul has also cited the Norwegian example, saying that when the day comes for Turkey to become a member, Turks may opt not to join to preserve the country’s comparative advantages.

The EU Commission’s 2014 Progress Report also stressed Turkey’s vital strategic location in terms of developments in the Black Sea region and the Middle East, and recommended deepening the cooperation between Ankara and the EU in a host of areas of concern to both sides.

Historically speaking, Turkey’s bid for EU membership has been looked on with suspicion and derision in the Middle East, the prevalent belief being that this is the clearest indication that Ankara has turned its back on its Islamic heritage.

But, with the Arab Spring having gone seriously wrong, the example of a secular and democratic Turkey with an EU perspective is expected by many analysts to gain importance in the region again. This will, however, require a Turkey that returns to the path of reforms, rather than giving the appearance of drifting away from the EU.

Put another way, Ankara will have to overcome the impression in Europe that it is part of the mess in the Middle East, as Italy’s Deputy Foreign Minister Lapo Pistelli said during the conference organized by TUSIAD and the Brookings Institution.

Addressing the Parliamentary Budget Commission on Nov. 24, Turkish Ambassador Volkan Bozkir stated once again that the EU perspective remains a strategic choice for his government. Considering the doubts expressed by influential quarters in Turkey, however, it seems his government will have to go beyond mere verbal expressions to prove this.