The muezzin of a mosque in central Istanbul lost his position after he denied Prime Minister Recep Tayyip Erdogan’s assertions that alcohol was consumed inside the mosque during the Gezi Park protests. 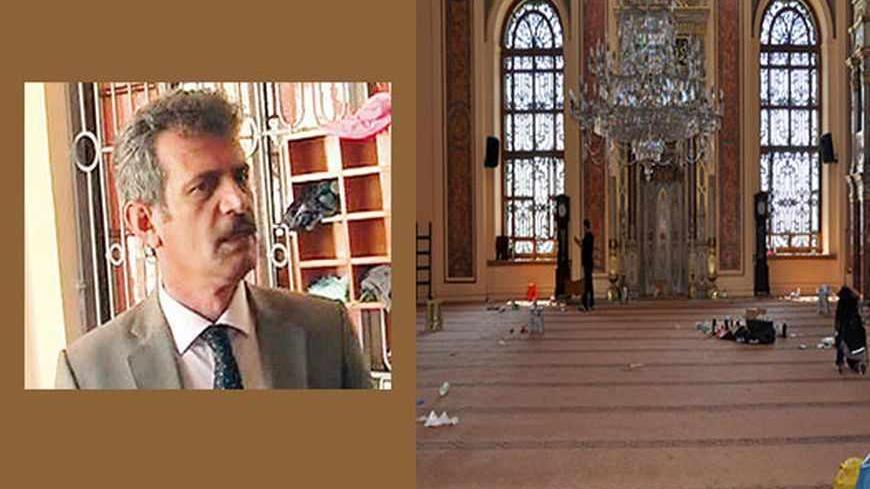 Fuat Yildirim, the muezzin of Istanbul’s Bezm-i Alem Mosque, was transferred after a controversy over whether there was consumption of alcohol in his mosque during protests. (Left photo: cdncms.todayszaman.com. Right photo: gazeteport.com.tr) -

Turkish might be a relatively lean language when it comes to the number of words in it (barely more than 111,000 words, according to the official Turkish Language Institute, compared to English which tops a million), but it is rather rich in wisely-quipped proverbs that have stood the test of centuries.

One such adage that I find especially relevant to current-day Turkey is, “The one who speaks truth would be expelled from nine villages.”

Depending on which segment of society you are focused on, you can replace the word “villages” these days with, say, “newspapers," "TV companies," "universities” and — given the most recent development — even “mosques.”

What does not change much is the motive behind the expulsions. In most instances, it is the authorities’ distaste for truth. And so it was in the case of Fuat Yildirim, the 44-year-old muezzin of Istanbul’s Bezm-i Alem Mosque.

Located on the Beşiktaş waterfront and near the Dolmabahçe Palace — home of six Ottoman Sultans — the mosque takes its name from Sultan Abdulmejid I’s mother, who commissioned it in the mid-19th century from Garabet Balyan, the well-known Armenian architect also responsible for the design of the palace.

Bearing all the elegance of late Ottoman neoclassicism, it is a jewel of a mosque and a staple of tourist visits to the Dolmabahçe Palace complex, although groups are seldom allowed inside. It is also a fully-functioning place of worship, with a modest-sized congregation mostly composed of local shopkeepers.

Cab drivers and passers-by who happen to be there when the adhan is called often join the jamaat, but it is the neighborhood vendors who are at the Bezm-i Alem Mosque every day for the noon prayer who count Yildirim as one of their own. One does not need to be pious to have admired the call to prayer recited here in a consistently solid bass-baritone five times a day for as long as most residents in the neighborhood can remember.

Twenty-four years to be exact. Yildirim had just turned 20 and was not yet a high-school graduate when he was appointed the muezzin of the Bezm-i Alem Mosque. Originally from Turkey’s eastern province of Erzurum, he completed his studies while working as the muezzin. He eventually got married, had a daughter and lived with his family at the private lodgings adjacent to the mosque.

I will not go into details here, since Yildirim’s attorneys made it clear that their client did not want his private life to be discussed publicly. Suffice it to say that the locals describe Yildirim and his family as peaceful people who lived humbly but comfortably, enjoying their beautiful view of the Bosphorus and a central location. The mosque, it seems like, was their sweet home.

Columnist Yalçın Bayer broke the story on Sep. 21 that Yildirim had just been transferred. “Yildirim, the most discussed figure during the protests, has been exiled to Başakşehir’s Kayabaşi village [a remote settlement in the outskirts of Istanbul],” Bayer wrote. “It was alleged that alcohol was consumed inside the mosque during the Gezi events, but the mosque’s muezzin … stated, in spite of all kinds of pressure, that there was no drinking of liquor.”

Let’s rewind the time for a moment to the evening of June 1.

It was the Saturday following the first week of the protests and a festive sit-in continued in Taksim Square, while the adjacent areas resembled a battlefield with the heavy use of water cannons and tear-gas grenades against demostrators. In the meantime, the ferries were carrying loads of protesters from the Asian side of the city across the Bosphorus. They all debarked at the Kabataş pier, not very far from the Bezm-i Alem Mosque, and joined the crowd that was gathering at Dolmabahce Square to march on to Taksim.

At one point, the number of protesters outside the mosque reached to 60-70,000 according to the statement Yildirim made when he was interrogated later by the police. One of the worst skirmishes of the evening took place right there. Several people were hit by tear-gas grenades and many more suffered from tear gas suffocation. Yildirim also testified that some demonstrators set fire to a police vehicle and threw stones at the fire brigade that came to the rescue. It was a nightmare.

In the next 24 hours, dozens of protesters took refuge in the Bezm-i Alem Mosque. A video taken on that day show that the mosque had become a makeshift medical center, with doctors among the crowd aiding the wounded. The atmosphere was not all calm, however. In Yildirim’s words: “There were people wandering inside the mosque with their shoes on. … There were people that I could tell from the way they behaved were drunk.”

That is the range of acts that are deemed disrespectful of Islam which Yildirim admitted seeing that night inside his mosque. During an interrogation that lasted six hours, he also said that an empty beer bottle was found outside one of the windows. But he did not testify to seeing people consume alcoholic beverages.

On the contrary, during a conversation with the cabinet minister Egemen Bagis that was witnessed and reported by columnist Suleyman Gunduz in the pro-government newspaper Yeni Safak, Yildirim categorically denied that claim.

“Muezzin Yildirim is not aware of how his behavior has indeed saved this country from grave harm,” the conservative columnist commented later, adding, “Those who attempted to use [what transpired in the mosque] as a basis for provocation brought the country to the brink of great danger.”

Later, when he talked to reporters following his police interrogation, Yildirim pointed out that he was a man of the cloth and could not lie. “I did not see anyone drink or hold a liquor bottle inside the mosque. I cannot testify to something that I had not seen,” he said.

That was stepping over the line, apparently. Here was a government official — as all Muslim clergy are in Turkey — who could not tell a lie even though, given the length of interrogation and the angry speeches of Prime Minister Recep Tayyip Erdogan, that almost seemed to be what was expected of him.

Indeed, over a three-week period Erdogan spoke repeatedly about what he believed to have transpired inside Bezm-i Alem Mosque. It was his claim that alcohol was consumed there. He also stated that all the disrespectful acts were captured on videotape — evidence they would present to the public.

Well, guess what? That video was never shown and no one yet has corroborated Erdogan’s claim.

That is not much of a consolation for Yildirim, who recites the call to prayer from a mosque that is not merely many miles but, in a sense, a world away from what he used to call home.

For its part, the Directorate of Religious Affairs said in a Twitter post over the weekend that Yildirim was not discharged, but only temporarily removed.

And how long is “temporary”? “While an investigation into the alleged alcohol consumption in the mosque is carried out,” the directorate said.