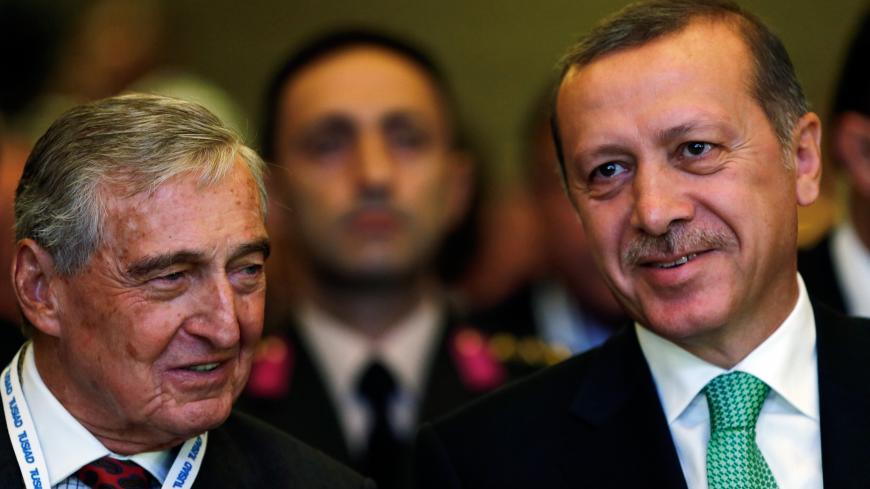 Rahmi Koc (L), the honorary chairman and member of the board of directors of Koc Holding, is seen with Turkish President Recep Tayyip Erdogan during a meeting of the Turkish Industry and Business Association in Istanbul, Turkey, Sept. 18, 2014. - REUTERS/Murad Sezer

Turkish tycoon Rahmi Koc announced last month that his business empire, Turkey’s largest, had grown enough at home and was turning to overseas investments. “The Koc Group has to open up to the world,” Koc said at a Jan. 18 press conference. “From now on, the investments will be abroad.”

Koc claimed his company had become “two sizes too big” for Turkey, and the competition watchdog was now constraining its growth. Referring to Koc Holding’s home appliances giant, he said, “When Arcelik adds another two points to its market share, the Competition Authority instantly tells us that it is too much, that we should stop. When we buy something new, they deny a permission. Hence, we need to move investments abroad.”

With annual sales equivalent to 6% of Turkey’s gross domestic product, Koc Holding employed 83,000 people at the end of 2016. That 16% of those employees were abroad means it already has significant investments overseas.

In 2016, Arcelik’s consolidated turnover stood at 16 billion Turkish liras ($4.3 billion), 60% of which came from international markets, including production abroad. Arcelik’s domestic appliances brand Beko is the second largest in Europe. The company owns plants in Romania and South Africa, manufacturing home appliances under the brands Arctic and Defy, respectively. In 2016, the company acquired Dawlance, Pakistan’s leading home appliances maker, including its three plants and distribution network, to create a “commercial corridor for a stable and strong presence between Asia-Pacific and Turkey.”

Of note, Koc Holding has found little support at home for its drive to expand into the defense industry. Some suggest its projects have fallen victim to political frictions with the Justice and Development Party (AKP) government. In this sector, too, the conglomerate is looking to foreign markets, especially in the Gulf. Its armored vehicle maker, Otokar, established a subsidiary in the United Arab Emirates that in a joint venture with a local partner won a $661 million contract last year to supply amphibious armored vehicles to the UAE army. The deal marks the largest single defense industry export for Turkey to date.

In the automotive sector, Koc’s retail and rental companies operate in 236 locations in Azerbaijan, Georgia, Hungary, Iraq, Kazakhstan and northern Cyprus. Its bank, Yapi Kredi, has the backing of foreign subsidiaries in Azerbaijan, Malta, the Netherlands and Russia.

Naturally, Koc Holding is not alone in investing abroad. Turkish overseas investments total some $40 billion, but this is a rather low figure compared to Turkey’s peers among emerging economies. Mexico, for instance, has invested $160 billion abroad, India $156 billion and Hungary $225 billion.

Most of Turkey’s overseas investments, as much as 68%, are concentrated in the finance sector, mostly in financial hubs such as Luxembourg and the Netherlands. The rationale is clear: to facilitate the acquisition of loans and mediate in foreign trade transactions.

Industrial investments account for only 15% of total investments abroad, including the public company Turk Petrol’s oil exploration and production interests in Azerbaijan, Iraq and Russia. Koc Holding is the leading overseas investor in manufacturing, followed by smaller companies active in various subsectors. Chief among them is the textile-garment industry, where Turkish businesses have been traditionally competitive. Turkish overseas investmentsin textiles and garments amount to $528 million, concentrated mostly in Balkan, Asian and African countries, which offer cheaper labor and raw materials.

In the food sector, Yildiz Holding’s food giant Ulker has significantly increased its international presence in recent years, acquiring some of the world’s best-known chocolate, candy and biscuit makers in Godiva, DeMet’s and United Biscuits.

Still, in the big picture of emerging economies, Turkey lags behind its peers both in attracting foreign investment and investing abroad. Today, however, Turkish entrepreneurs have a new reason to put their money to use abroad — apprehension over mounting political tensions and uncertainty at home. Along with the growing economic risks, many are scared of the sharp decline in the rule of law and creeping nepotism.

The AKP government’s polarizing policies have not spared the business community. As ties between the government and crony companies come to light, and many businesses face pressure to bow down to the government, shifting investments abroad is increasingly becoming an alternative. This is bad news for Turkey’s army of the jobless as well as for various side industries and suppliers that rely on industrial investments.

Although few dare to say it loudly, the general view is that investment money will continue to flow abroad — driven by growing political tensions and economic risks at home — unless Ankara lifts the state of emergency in place since the July 2016 coup attempt, and the country returns to parliamentary governance anchored in democratic norms and the rule of law.