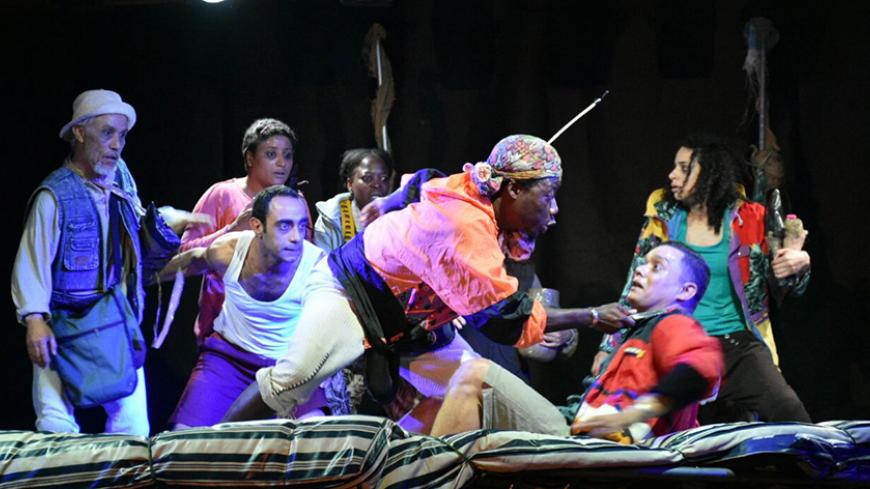 With a message of fighting terrorism through the art of theater, the Sharm el-Sheikh International Festival for Youth (SITFY) brought together performers from around the world to share their stories and give Egyptians a taste of other cultures.

“By establishing this festival, we wanted to respond in a cultural way to all the terrorist attacks that have recently taken place, because culture and arts are our way to enlighten the minds of people,” Mazen El-Gharabawy, festival president, told Al-Monitor.

SITFY was first held in January 2016, a few months after the downing of a Russian plane in the Sinai Peninsula in October 2015. At that time, a number of countries, including Russia, the United Kingdom and France, decided to suspend flights to Sharm el-Sheikh. Egypt experienced a tragic drop in tourist visits, a crisis from which it still suffers.

“We wanted to invite theater practitioners from all over the world to come to Sharm el-Sheikh, perform and watch other people’s performances and prove to the whole world that this city is safe and stable,” Gharabawy, who is also an actor and theater director, said. The festival is being organized with the support of the Egyptian Ministries of Culture, Tourism, and Youth and Sports, in addition to the South Sinai governorate and other institutions.

“The dominant theme of our festival is ‘arts counterterrorism.’ Some of the performances we chose are tackling issues related to war and terrorism, because these issues not only affect Egypt but also other parts of the world. So, we are all affected by the same issues,” said Gharabawy.

To spread theater culture among young people, festival organizers invited some 350 students from universities in Cairo, Fayoum, Gnoub al-Wady, Aswan, north and south Sinai, and other governorates, to take part in workshops on acting, directing, puppetry, scenography, street art and writing for theater.

“We invited university students from each governorate in Egypt, especially the border cities, to participate in the activities, through which we help them understand arts better and teach them more skills, so they become more involved in arts and think in a positive way in all aspects of life,” festival director and actress Wafaa al-Hakim told Al-Monitor. “We want to integrate students in society to prevent them from becoming potential extremists or adapting harsh attitudes at a young age. Arts help people to be more understanding and creative.”

This year’s festival featured performances that tackled illegal migration, the war against the Islamic State (IS) in Iraq, terrorism and oppression in different parts of the world.

In the Tunisian-Canadian production “Al-Shaqaf,” which in colloquial Tunisian also refers to a small boat used to transport illegal migrants, the everyday tragedy such migrants face was presented in a deeply painful but realistic way.

“Every day we have illegal migrants drown at sea, but all of them are treated as numbers. But what are their stories? We wanted to tell what might have brought them here,” director Sereen Qanoun told Al-Monitor.

The play was jointly stage directed by Tunisian Sereen Ezzeddine Qanoun and Lebanese-Canadian Magdy Abu Matar. The piece, which won for Best Play Script at the festival, highlights why some people attempt to illegally migrate.

“Not only war urges people to escape from their countries, but so does social oppression,” said Qanoun. “We wanted any person from any country, when watching the play, to feel concerned about the issue.”

South Korea was presented by “Butterfly,” directed by Ha Kyung-Hwa, a professor of acting from Suwon Women’s University. The emotional piece examines the oppression of women and is inspired by the story of the “comfort women,” who were forced into sexual slavery by the Imperial Japanese Army in conquered territories before and during World War II.

In the performance, actresses recall the horror that South Korean women suffered at the time and how they retain a sadness from the experience. The performance won the festival prize for Best Choreography.

“My performance is about unfairness toward women,” Kyung-Hwa told Al-Monitor. “Now our relationship with Japan is OK, no problems. But we can’t forget the history.”

The director also mentioned that she was inspired by a statue of a comfort woman outside the Japanese Embassy in Seoul. In one of the scenes, the actresses wear mufflers like the statue there.

Angela Jeon, coordinator of the South Korean troupe, said that when she heard about the festival she called her friend Kyung-Hwa, and they applied. “It is a beautiful city, and the weather is so nice. People are so kind,” Jeon told Al-Monitor.

Taking advantage of Sharm el-Sheikh's warm weather, the Iraqi performance “Maot Saleh lel Shorb” (An Edible Death) was performed on the beach. The piece, which deals with illegal immigration, begins with actors emerging from the sea, having survived a boat wreck. They then narrate the tragedies that led them to escape from their countries.

The performance highlights the horrors of IS in Iraq, the war in Syria and instability in other Arab countries, all of which have pushed people to escape to Europe where they hope they can lead better lives.

“We not only speak about Iraqis, however,” director Mohamed Zaki told Al-Monitor. “We refer to the situation of all the Arab people.”

Zaki, who was affected by the performance, remarked, “There are many people who escaped war and illegally migrated by the sea. … Some of them were friends of mine who drowned at sea.”

After “An Edible Death” wooed the audience, the festival organizers said they will work on hosting more street and open-air performances at future festivals.

“We wish that we could make street activities not only in Sharm el-Sheikh, but also in all the streets of Sinai and in all the Egyptian governorates,” festival director Hakim said.