Hoping signs of progress in talks with Houthi rebels come to fruition, Riyadh is now looking away from military plans and considering a political solution to take a strategic Yemeni Red Sea port. 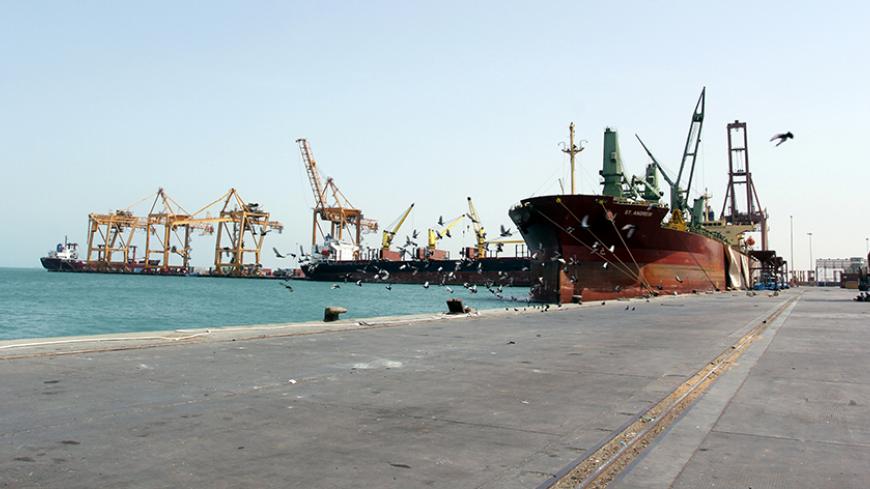 A ship is docked at the Red Sea port of Hodeidah, Yemen, March 23, 2017. - REUTERS/Abduljabbar Zeyad

WASHINGTON — Amid signs of possible progress in negotiations with Yemen's Houthi rebels, the Saudi-led coalition is now looking for a political solution rather than a military operation to take Yemen's Red Sea port of Hodeidah, former US officials who work on Yemen said.

The possible breakthrough could avoid a military escalation to take the Houthi-held strategic port that some US and UN experts feared could exacerbate famine in Yemen after two years of civil war have made millions of people dependent on humanitarian aid.

"It seems people are backing away from the idea of a military operation," former US Ambassador to Yemen Gerald Feierstein told Al-Monitor April 27, referring to the Saudis. "And [they] are thinking more creatively about how do we achieve this objective without having to resort to military [solutions] and breaking a lot of crockery."

"So I think that right now, there is a lot of rethinking going on about can we get this done other ways," said Feierstein, now a senior fellow with the Middle East Institute. "And maybe they are getting some positive signals from the Houthis, that [they] might be amenable to an arrangement here that gets this thing kind of unstuck and allows the humanitarian assistance to come in."

A political solution to the Hodeidah port could also prove to be a confidence-building measure that could help make way for renewed political talks to try to find a political resolution to Yemen's two-year civil war, diplomats said.

"Ramadan is four weeks away," Feierstein added. "If you can put on the table now something on Hodeidah, it can be an extremely positive signal for the Yemeni people to see that maybe Hodeidah is about to be resolved," and could be a springboard for political reconciliation talks.

"The equipment to repair the damage to the port is in the region," Feierstein said. "If you can get an agreement [for the Houthis] to pull away from the city, whatever that may be to operate the port, to ensure it is not being used for contraband and to work out an arrangement, with local companies, commercial contractors, to take this stuff and distribute, that sends an incredibly important signal to the Yemeni people."

"I believe all of the parties are confronting the realities around Hodeidah," a former senior Barack Obama administration official, speaking not for attribution, said.

"The Houthis understand — or should understand — that they face a different political and geopolitical landscape, which directly impacts their military position on the Red Sea," the former senior administration official said. "And the coalition now sees more clearly the magnitude of the task and the significant risks to the already dire humanitarian situation."

Yemen's Prime Minister Ahmed Obeid bin Daghr, speaking to Reuters on the sidelines of a UN Yemen donors' conference in Geneva April 26, said Yemen had proposed that the UN take control of the Hodeidah port to ensure that the Houthis do not receive Iranian-smuggled arms through it.

"This port has been developed for receiving weapons for the militias. We are taking decisions to finalize what is going on. We don't prefer using force there," Daghr told Reuters.

"So it's us who proposed to the United Nations to operate the port and to impose monitoring on the port … but we didn't receive a clear answer on this matter."

Nations donated $1.1 billion for the UN’s Yemen humanitarian aid appeal this week, including $94 million from the United States. The UN says 17 million of Yemen's 26 million people are at risk of hunger.

"We are witnessing the starving and the crippling of an entire generation," UN Secretary-General Antonio Guterres said at the Yemen pledging event in Geneva April 25, calling the Yemen famine a "man-made crisis."

"Some 17 million are food-insecure, making this the world's largest hunger crisis," Guterres said, adding that one child under 5 years old dies every 10 minutes in Yemen.

"This means 50 children in Yemen will die during today's conference — and all those deaths could have been prevented," he said.