As the Trump administration considers providing support for a UAE/Saudi operation to take a Yemeni port, some UN, former US officials warn it could tip Yemen into famine. 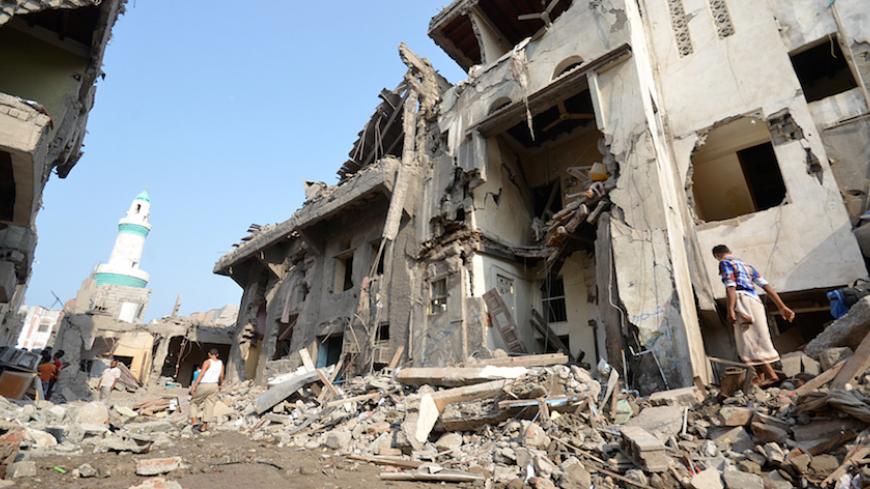 A man walks on the rubble of houses at the site of a Saudi-led airstrike in the Red Sea port city of Hodeidah, Yemen, Sept. 22, 2016. - REUTERS/Abduljabbar Zeyad

WASHINGTON — Some UN and US humanitarian officials have expressed alarm as the Trump administration considers whether to provide increased US logistical and intelligence support for an Emirati/Saudi coalition military operation to take the Red Sea port of Hodeidah from Yemen’s Houthi rebels.

The proposed operation comes two years into a grinding civil war in Yemen that has killed 10,000 people and led to a stalemate, and as aid groups warn the impoverished nation of 27 million people could be on the brink of famine.

Proponents of the operation, including officials in the United Arab Emirates and Saudi Arabia as well as some in the State Department and Pentagon, say it could pressure the Houthis into agreeing to return to the negotiating table, and bolster relations between Washington and Gulf allies. Critics of the proposal, including former USAID and Obama National Security Council (NSC) officials and experts at the United Nations, say that if the operation to take the port from the Houthis is successful, it would create a new front line through which it would not be possible to bring food at the needed scale into Sanaa, the capital of 2 million people, and could tip large swaths of the country into famine.

“It is my firm belief that further military escalation and humanitarian suffering will not bring the parties closer together,” Ahmed told the UN Security Council on March 29.

“The only way to prevent a worsening of the situation is to reach a peaceful resolution to this conflict, which has been going on for too long,” Ahmed said. "We must give peace another chance.”

US Secretary of Defense Jim Mattis proposed the United States provide “limited support” to the UAE-led operation in a memo to national security adviser H.R. McMaster this month, the Washington Post reported.

The National Security Council did not respond to queries about whether it has taken into account the concerns of USAID and UN officials that the operation could escalate the humanitarian disaster in Yemen.

The former top NSC official on Yemen said taking the port of Hodeidah could lead to humanitarian tragedy.

“The warring parties are waiting for the math to change based on military moves,” Eric Pelofsky, former special assistant to the president and former NSC senior director for North Africa and Yemen, told Al-Monitor.

“From the negotiations, you can see why the coalition is convinced that there is a need for military pressure on the Houthis.”

“But I think moving against Hodeidah port could lead to terrible humanitarian consequences,” Pelofsky, now with the Washington Institute for Near East Policy, said. “The risk of humanitarian harm is so great.

“If you ask humanitarian workers about the feasibility of getting humanitarian aid through battle lines at scale to feed a capital of 2 million people, they will say no — you can’t get that volume through,” Pelofsky said.

Former US Ambassador to Yemen Gerald Feierstein disagreed, saying if the coalition could actually take Hodeidah and repair the port, it could potentially facilitate humanitarian access. He said American officials were not convinced, however, that the UAE/Saudi coalition plans to conduct the operation would succeed.

“If they can get control of Hodeidah ... then repair the damage to the port and get it functioning again and provide unfettered access to humanitarian relief organizations, it may be a way of addressing the humanitarian crisis,” Feierstein, now with the Middle East Institute, told Al-Monitor.

“So the issue is, does the coalition have a plan that looks like it might succeed,” Feierstein said. “That seems to be where the debate is now. Because my understanding is, to the extent they have shown what they were thinking, our response has been, ‘We don’t think that is going to work. You need to do some more work on this.’ There is no point if they basically end up leveling Hodeidah.”

“The other issue is … it is not only a question of can they get ahold of it, but can they keep it,” Feierstein added.

There was an internal debate over the final year of the Obama administration about whether the United States should support potential future efforts by the coalition to take the Hodeidah port, but ultimately the administration decided against it, said Jeremy Konyndyk, a former top USAID official.

“From USAID’s perspective, we thought the US should strongly oppose this,” Konyndyk, the former director of USAID’s Office of Foreign Disaster Assistance, told Al-Monitor. “That is where the administration ultimately came out. Some at [the] State [Department], DoD [Department of Defense] felt differently.”

He said, “The concern is [after they would take the port], they would push inland a certain distance, and you would have a front line stand in the way of the vast bulk of commercial food imports and aid flows. This is a country that depends on food imports for 90% of its staple foods. … You [could] end up with a situation where most of the population is on the wrong side of the front line from the two ports that have greatest capacity to import food. Even with Hodeidah functioning and accessible to UN aid operators, it has been a struggle to keep the country from crossing into famine.”

“The view that we had at [US]AID — among [US]AID leadership — was that if that port were to be lost, it would likely be enough to tip the country into famine,” Konyndyk warned.

Some former US officials said they were concerned that the Trump administration might be debating decisions on the matter in an interagency group currently dominated by the military, and without senior staff appointed and representing dissenting views from, for instance, USAID, and State Department bureaus less sympathetic to Gulf allies’ points of view. Rather than supporting escalation of the 2-year-old Saudi-led war in Yemen as a demonstration of alliance management, the US administration should be focused on how to get the parties back to negotiations to end the war, one official said. Yemen is also not the best venue for the Trump administration to demonstrate its intent to push back on malign Iranian actions in the region, he said.

“With so many positions unfilled at the [State] Department, the Gulf experts are almost exclusively shaping the Department's approach,” a former senior US official who worked on the Middle East, speaking not for attribution, told Al-Monitor. “This means reverting to terms that the [exiled Yemeni President Abed Rabbo Mansour] Hadi government is willing to accept, many of which are nonstarters for the Houthis and [former Yemeni President Ali Abdullah] Saleh — which means the peace process is really pretty much on hold.

“It appears that the new US administration feels like Yemen is the safest space to push back on Iran with the least spillover/consequence/escalation risk,” a former senior US official who worked in the Middle East, speaking not for attribution, told Al-Monitor. “That is a risky conclusion, especially if it is wrong.

“The Iranians could respond just as much there as anywhere else,” he said. “I think the administration reassures itself that it can win any escalation. But that assumes attribution and assumes that the escalation is symmetric. But if the escalation is asymmetric and attribution is incomplete, then we may or may not be able to respond effectively and significant US interests could be at risk.”