While thousands flee west Mosul, some Iraqi families vow to hang on

Despite the dangerous situation in Mosul, many residents are choosing to stay in their homes as the fighting to retake the rest of the city continues. 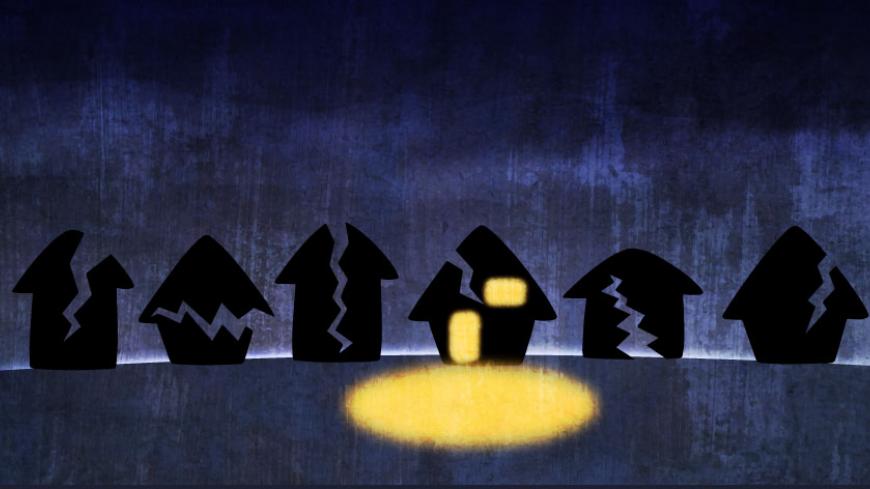 MOSUL, Iraq — Southwestern sections of Mosul retaken weeks ago from the Islamic State are now filling with various Iraqi security forces heading to and from the front and civilians fleeing newly liberated areas of the city.

Fighting continues less than a kilometer away, where streets are safe to use one day and riddled with sniper fire the next. Though the heavily damaged areas initially appear to be empty of civilians, some residents are still in their homes, where traditional outer walls protect them from the eyes of the street.

The federal police facilitated Al-Monitor’s mid-March visit to the home of one family.

A father of four in his early 50s living with his two youngest children, wife and mother-in-law told Al-Monitor that the family had not left the city throughout the over 2½ years under IS.

IS, and and al-Qaeda in Iraq before it, are known to have financed themselves to a large degree with kidnappings and extortion, and the family has suffered from both crimes.

Abu Mohammad, asking that his real name not be used, said that his only son was kidnapped in 2006 "by Daesh" when the boy was only nine years old. He did not distinguish between IS and al-Qaeda, like many Iraqis.

"He was the first child in the city to be kidnapped by them," claimed Abu Mohammad. He added that the boy, now 20 years old, had been held for about a week until the family paid $10,000 to secure his release.

A businessman from the Dulaim tribe, Abu Mohammad said his family "didn’t mix with" al-Qaeda and later IS, and that to avoid contact and conflict with them as much as possible, "I told my truck drivers to pay them whatever they asked."

He said that he had imported and exported various goods to and from countries including Turkey and Germany prior to IS taking control. When IS took over the city in June 2014, however, restrictions were put in place and cross-border trade eventually came to a halt.

His wife, who is originally from Baghdad, said, "In one day, they hanged 40 people from electrical towers" for such crimes as "having been part of the army and police. Some for having a cellphone."

His wife’s brother is a staff brigadier general in the Iraqi armed forces — and thus one of IS’ prime enemies — and she is a Shiite. When suspicions grew about possible government informants among the population about a year ago, the couple were taken by IS for one day for questioning. "They interrogated her with religious questions," Abu Mohammad told Al-Monitor, but later let them both go since he is Sunni and they had been married a long time.

Proud of his Mosul origins, Abu Mohammad noted that he lives in the city of his great-grandfather and that most of the IS members he had come into contact with were "Iraqis, but from villages."

Asked whether anyone in his family had acted as an informant for the security forces, Abu Mohammad laughed and said, "We would have been beheaded."

He added that he had had his cellphone with him the entire time but had hid it in his home. IS, he said, had checked houses and marked the doors with whether they had been found clear of prohibited goods. "If they had found our television, though, we would have been whipped," he said.

The house seems mostly undamaged. A widescreen television now has pride of place in the living room alongside a few couches, and photos of relatives hang proudly on the walls. The photos show female relatives with their heads covered but not their faces, which IS would have been deemed sacrilegious. The group is known for blacking out the faces on school walls of both people and animals in other parts of Iraq and Syria.

In visits to the surrounding area, Al-Monitor encountered many people fleeing areas closer to the front line: frightened women burdened with large shopping bags and blankets and dressed in long black attire, some with the fronts of their black niqabs thrown back to expose their faces, eyes and heads kept down for the most part. Few male civilians were in evidence except the elderly and children.

One exception was a 24-year-old man with a "jihadist-style" beard. Riad said in near-perfect English that he had been left alone by IS since he was the only son that could take care of his elderly father, who was with him. The elder man, who was unable to walk, was being carried on a garish, flower-print blanket to a federal police vehicle.

Riad, who is from the Bab al-Jadid area, said that he had been a first-year archaeology student when IS came and that his main hope now is to return to his studies. He told Al-Monitor there would be no way to contact him again since he did not have a cellphone before he and his father left with the federal police.

When the operation to retake eastern Mosul started on Oct. 17 last year, many expected a catastrophic situation for displaced Iraqis, with some estimating that 1.5 million would flee the city. UNHCR reports that 302,430 of those internally displaced from Mosul and the surrounding area since the operation began were still displaced as of April 2.

The fighting for the more densely populated western half, which began on Feb. 19, has been fiercer and many civilians have been killed both trying to escape and in other incidents for which it is still unclear which side was responsible.

Once liberated, these areas lack services such as clean water and food and are often still susceptible to IS attacks. Some citizens, like Abu Mohammad and his family, are nonetheless choosing to remain in their homes if at all possible.