As the Iraqi forces declare the total liberation of Mosul, its residents rediscover the pleasures of freedom, for a moment forgetting about the past and the challenges ahead. 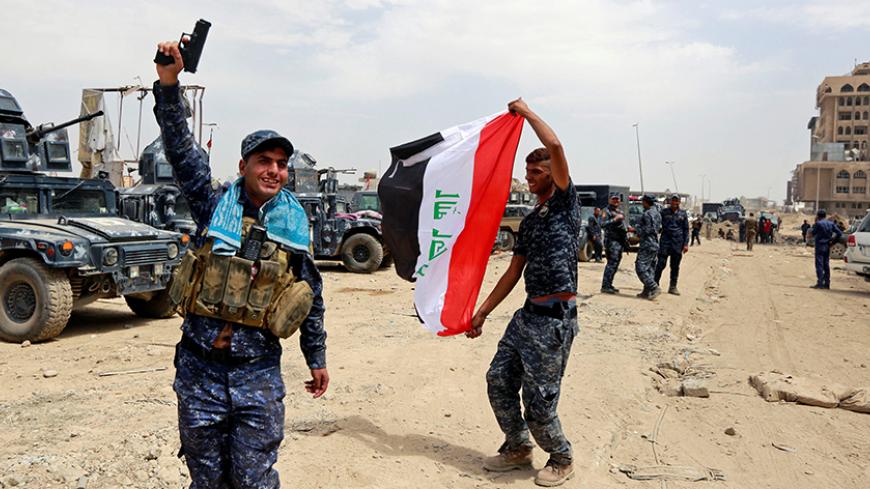 MOSUL, Iraq — As the Islamic State (IS) crumbled in western Mosul and Iraqi Prime Minister Haider al-Abadi traveled to Iraq's second largest city to proclaim its liberation on July 9, some Iraqis began to think about plans for reconstruction. The government moved to enforce security, and Mosul residents — able to breathe a bit — took steps toward returning to normalcy, though it will take some time to undo what IS has done.

It was during hours of nonstop dancing at a cousin's July 1 wedding that Riad could forget for awhile the image of his three-story house blowing up. IS had uploaded footage of it to the Internet. As a policeman for the state, Riad had been a target of the militant group. At the wedding, he blocked out the reality for one moment that he no longer had a house or a job with which to support his wife and two children.

Riad's cousin Ahmad is finally getting married. He and his fiancee had been separated for more than two years after he escaped to the nearby city of Erbil with his family. The couple kept in touch via cell phone.

The wedding celebration is taking place in the Sumer neighborhood of eastern Mosul, liberated earlier this year. Most of the guests — dancing, listening to music and smoking — are just basically having fun for the first time since that fateful day in June 2014 when IS entered the city in a blitzkrieg. After a few weeks of grace, the group implemented its oppressive policies, banning one thing after another. “That's why we are partying so hard!” Riad exclaimed, standing inside a doorway.

A tiny living room is filled with sweat and smoke, and music for the dabke is blaring as youngsters lead in the dance. Other guests stay stuck to the wall, with some occasionally joining in. Though initially wary of speaking out, the guests slowly recall the repression the extremist group imposed on them.

“One day I entered the pharmacy to buy contraceptive products,” said Neva. “I have known the pharmacist for years, so we were somewhat close in our way of communicating and interacting,” by which, she meant, they would make jokes and laugh. Then, a militant entered the shop. “He asked us why we were laughing, and then began to tell me how I should behave and the distance I should keep.” After Neva left the pharmacy, the militant tailed her as she walked home. IS had mandated that women could not leave their homes without a male relative.

As the party continued, the dancing became more intense and physical. Even after six, seven hours, Ziad and his cousins still barely left the stage for a moment.

“We are usually not this intense,” he said. While he tries to leave behind the bad memories of the past two years, Riad has to do so without his best friends. Most of them escaped, striking out for Europe as IS hit harder with its iron fist. Ziad remained behind, finally having to accept the strict rules he repeatedly transgressed. He was once jailed and whipped 50 times because he had shaved, something IS forbade.

Mosul residents' desire to return to a certain degree of normalcy is countered by the visible scars and economic devastation left in the wake of IS' reign and defeat. Concrete barriers block the circulation of vehicles as does the rubble of buildings destroyed in airstrikes by the US-led coalition. The roads are filled with potholes from artillery shells.

Near the wedding tent where more than a hundred guests, all men, have gathered for lunch, green markings indicate the buildings without satellite antennas. When Iraqi forces launched the offensive to begin taking Mosul last October, IS decided to block TV reception to prevent the local population from receiving news about the offensive's progress.

Today, cars crossing the city going north-south encounter multiple checkpoints. Most are staffed by army or Federal Police personnel, but a few, topped by Shiite flags in this predominantly Sunni city, are manned by members of the Popular Mobilization Units. The flags symbolize the troublesome sectarian divisions that helped IS enlarge the territory under its control. Their presence worries some residents.

“Hopefully we will have learned from past mistakes,” said a guest at Ahmad's wedding. Next to him, Ali, a tall Shiite man from Najaf, approaches because he wants his voice to be heard. “Listen well,” he began. “It is the first time I have been to Mosul in more than 20 years, and that shows that we, the people, do not care about the confession of each other.”

Ali will stay on for a few days after the wedding as a guest of the family. He will do so in a neighborhood that four months earlier had been under the complete control of the most viciously sectarian group in the region.

Opposite Sumer lies the popular area of al-Qadisiya, which remains the main commercial area of eastern Mosul. “This square used to be empty because young people didn't dare to gather here,” explained Barzan, Riad's cousin, navigating the area's main roundabout with his taxi.

These days, young couples, groups of friends and kids lay on the grass next to a destroyed fountain. IS had torched it due to the pictorial elements decorating the structure. The perimeter of the square is filled with shops that sell food, juices, ice cream and clothing. Many of the signs atop the shops have been sprayed with black paint to obliterate the faces on them. IS' interpretation of Islamic teachings forbade depictions of humans and animals.

“Everything was forbidden! Smoking a hookah, listening to music, dancing the dabke, wearing this T-shirt,” said Mohammad, pointing to the letters printed over on his friend's clothes. As if in a hurry to enjoy themselves, the teenagers had parked their car in the first grass spot of the Shalalat garden, the largest green space in the city. A speaker blasted music as the boys took turns smoking a water pipe under a tree.

Neither they nor Zacharias, who came to the square for a picnic with his parents and sister, had visited the gardens in the last few years. Meanwhile, his father, a teacher at university, has seen a growth in the number of students attending school. The curriculum imposed by IS is out, and the previous one has been readopted. Of note, women have also returned to the classroom.

As Zacharias enjoys the afternoon, he looks forward to things improving in Mosul after years of violence and instability. “God willing, I will finish my studies and then maybe I can find a proper job,” he said, echoing the hopes and worries of Riad, Ahmad and other Mosul residents.