Federal police forces are playing a crucial role in the liberation of Mosul, which will give them an opportunity to maintain security in the city after completing the liberation. 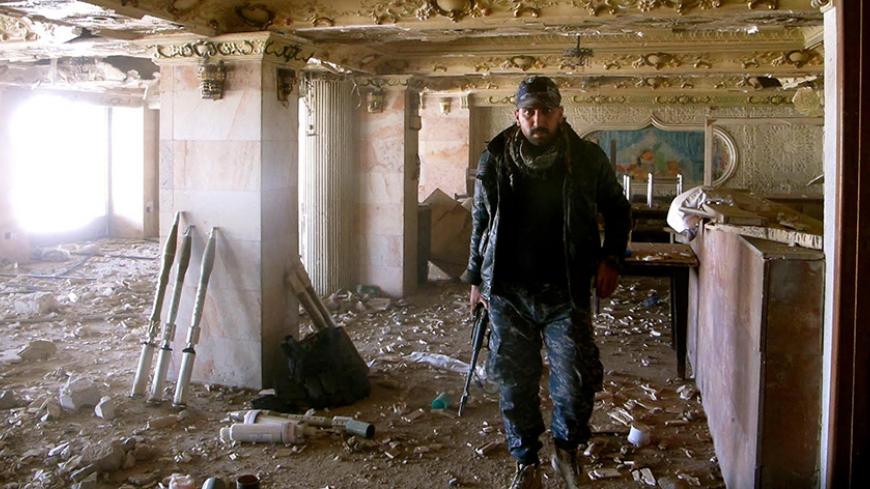 A member of the Interior Ministry's forces walks through a newly retaken building near the Old Bridge in west Mosul, Iraq, March 14, 2017. - Shelly Kittleson

MOSUL, Iraq — As the battle continues for the liberation of the remainder of Mosul from the Islamic State (IS), forces answering to the Interior Ministry have been playing more of a central role than those under the Defense Ministry.

Al-Monitor was told while visiting the front in western Mosul in mid-March that the army, under whose authority fighting wars would normally fall, has acted more as a holding force in many areas.

Given the extent to which gains have relied on intelligence and communication with local informants, and possibly due to lingering distrust in the ability of the army to deal with the threat after many personnel abandoned their positions and reportedly left behind thousands of Humvees in 2014 when the city was first taken by IS, this may not be as surprising as it might in other contexts.

Casualties are rising among the federal police, however, and several members were reportedly captured by IS after they ran out of ammunition March 20. A ministry official told Al-Monitor that the men had been killed, but denied that they had been captured prior to their death.

In March, IS-held areas in the old part of Mosul and the surrounding areas on the western banks of the Tigris River have been targeted mainly by the paramilitary federal police and the elite Rapid Response Division, both under the command of the Interior Ministry.

The forces have been launching attacks from multiple axes in the old part of Mosul, where the Great Mosque of al-Nuri is located. Here, IS leader Abu Bakr al-Baghdadi made his only known public appearance, announcing the creation of the "caliphate" in July 2014, days after a voice recording by IS spokesman Abu Muhammad al-Adnani had declared the same.

On March 11, Al-Monitor rode north from Baghdad to the battlefield with soldiers in their early 20s. The road runs through the flat agricultural lands of Salahuddin and the still burning oil fields of Qayyarah, set alight by IS, where women in black niqabs are seen waiting outside a medical center on the main road, past the vast destruction of Beiji with its oil refinery and its blast walls, barbed wire and lookout towers, still standing after several months of battles between IS and the Iraqi forces in 2015. All of the Sunni-dominant territory was under IS control at one point but has been retaken, though some parts continue to suffer sleeper cell attacks.

Sporting crew cuts and navy blue and black uniforms that have "Interior Ministry" printed across them, many of these young soldiers hail from the Shiite-dominant south or the capital; some chattered excitedly about how the various battles in the area had been won, while others stared pensively out the window.

Moving northward from a helicopter base not far from Hammam Alil, armed federal police were positioned every 20 meters (66 feet) or so on the winding road that stretched through the villages of Mosul, past a riverbed and the concrete chunks on the site that once was Mosul International Airport.

Though many of the areas in the southwestern part of the city have been retaken by Iraqi forces, the frequent sounds of IS sniper fire, mushroom plumes of car bombs and rockets continue to be present alongside damage caused by coalition airstrikes.

On March 14, as the Iraqi forces neared the Old Bridge, a number of hotels on a single block being used temporarily for shelter by some of the Interior Ministry forces on the front line were hit by two IS rockets while Al-Monitor was in one of the buildings, bringing down chunks of the ceiling even on the lower levels and filling the air with heavy white dust.

Streets near the retaken museum were rife with sniper fire and other streets leading to the former telecommunications building in the Nabi Sheet area, which Al-Monitor had visited the day before, had become off-limits due to the heavy IS sniper fire there as well.

Two days prior, during an interview in southwestern Mosul, federal police Brig. Gen. Salim Abd, the head of the Elite Forces in the 6th Division, told Al-Monitor that a Russian IS member was one of the few captured alive in recent battles.

He said that the Russian fighter had been taken at the sugar factory at the southwestern entrance to the city after they picked up on IS radio signals and overheard him calling for help. Abd added that the French had given them dozens of photos of French citizens they believed to be fighting on the side of IS and who are thought to still be in Mosul.

Many of the older members of the federal police, who previously were part of the Iraqi police force, have received training from both the American forces and the Italian Carabinieri paramilitary force.

Despite concerns that the counterterrorism forces might be the only Iraqi fighting force able to take on the challenges of the fight against IS, there has been been progress on the ground by forces answering to the Interior Ministry and others. However, some sources say this has come at a considerable cost.

One man whose brother in his late teens was killed in March said about 20 of his friends and acquaintances from his native area in the western Sunni stronghold of Anbar had been killed fighting with federal police in western Mosul. He said that many recruits were below the official minimum age of 18, but that "they are eager to fight IS" and that many would not give their real age because of this.

No casualty figures for Iraqi forces have been released since the uproar following the United Nations Assistance Mission for Iraq's publication of what it later admitted were "largely unverified’" figures in December.

One source from the Interior Ministry who spoke to Al-Monitor on condition of anonymity also expressed wariness about perceived biases held by the new interior minister, Qasim Mohammad Jalal al-Araji, who was appointed in late January. Araji reportedly moved to Iran a few years after the Iranian Revolution, where he joined the Islamic Revolutionary Guard Corps' Quds Force and was trained to fight Iraqi forces during the Iraq-Iran War (1980-88). The source said that civilian lives and those of the fighters themselves were not being valued.

The forces' media teams are eager to show the level of care taken to preserve civilian lives during the offensive, and Al-Monitor witnessed some internally displaced persons fleeing their areas and seemingly being treated well by the federal police.

Meanwhile, Interior Ministry forces have been employing new methods such as the use of drones in a bid to reduce civilian casualties, while officials criticized the March 15 report by Human Rights Watch that accuses them of using weapons indiscriminately.

Concerns that the Shiite-dominated Popular Mobilization Units would have a significant role in the operation to retake Mosul, and that this would stir massive sectarian tensions, seem to have thus far been proven wrong.

The Interior Ministry forces have taken much of the lead in the current phase, but who will be predominant in the fight for the nearby city of Tal Afar — which is likely to follow the taking of Mosul — is not yet known.