As Iraqi forces clear the recently liberated Zinjili neighborhood in western Mosul, the civilians who are finally leaving now find themselves caught in the crossfire. 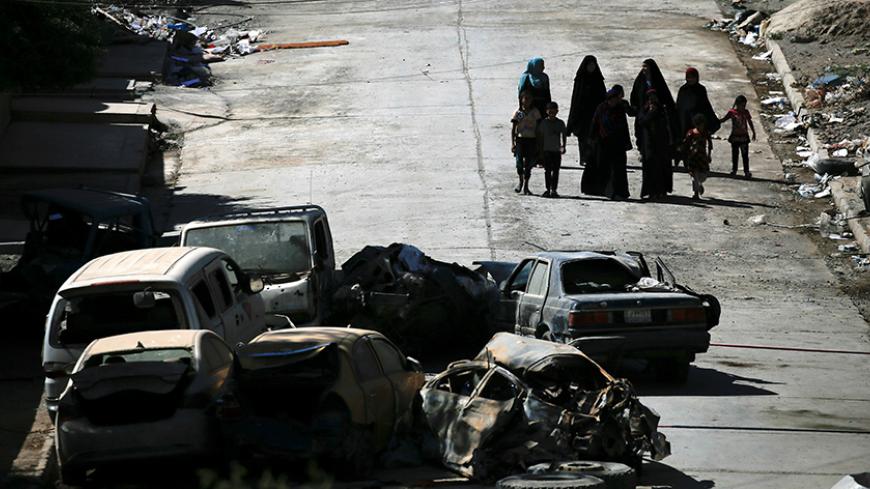 MOSUL, Iraq — Civilians who had remained under siege in Islamic State-held areas of the city for months have flooded the streets of Mosul's Zinjili neighborhood in recent days, many injured and separated from family members as they ran to evade snipers’ bullets.

Capt. Haider Kareem Sabri, deputy commander of first regiment of the federal police’s sixth division, told Al-Monitor that the first "corridor" to get civilians out of the area was abandoned June 1 due to too many IS snipers and that a backup one was now being used instead.

"We always have a plan B for the corridors," he said, noting that it was "part of the plan to liberate Mosul from the very beginning." He added, "We have intelligence officers working inside that inform the families of what route to use."

Some were seen rushing barefoot out of the area on June 1, carrying what they could. Men in galabiyas soaked with blood ran as fast as they could amid women in long, dusty black cloaks, slowed by the heavy bags they were carrying. Severe dehydration was apparent on many of their faces, along with tension, fear and anger. In the vast confusion, the sound of mortar shells being fired nearby mixed with ambulance sirens and the cries of the injured.

Those who could afford the yellow taxis waiting on a still passable main road paid to leave for other previously liberated areas, often piling children into the trunks to save money. Others began walking toward camps or were taken by ambulance to medical facilities.

The densely populated, less affluent area of Zinjili is "more heavily booby-trapped than any other area we have seen here yet," Maj. Anas Ibrahim Abdullah, commander of the first regiment of the federal police’s elite division, told Al-Monitor during a visit to the front line the next day.

The area is one of the very few in the city with parts still remaining in IS hands, but retaking it without massive civilian losses is proving difficult.

Al-Monitor traveled to the front in a federal police Humvee that was hit several times by snipers’ bullets as it raced over an area at a slightly higher elevation than the house-to-house fighting.

Some improvised explosive devices could be found in the streets nearby, many of which were covered in a thick white dust from buildings that had collapsed in the fighting.

Down the road, explosives, ammunition and weaponry were piled in a corner of what soldiers said had been a doctor’s home. A suitcase torn open in the bathtub bore a sticker showing that its owner had flown into Erbil in 2016.

A weapons expert told Al-Monitor that a photo of one of the piles "shows an unopened tin of Bulgarian 7.62x54R mm ... ammunition produced by Arsenal JSCo. in 2016," indicating there were still effective channels to get weaponry from the Balkans to Mosul at least as recently as last year.

On a visit to a nearby road the previous afternoon, Al-Monitor had seen federal police and emergency response division soldiers firing a barrage of rocket-propelled grenades and mortars and taking incoming fire. Now it was relatively calm, with only the occasional smack of a sniper bullet.

A bulldozer outside was working to smooth out a huge crater in the road left by an airstrike by shoveling both cars and earth into the hole. Nearby lay the charred body of a man federal police said was an IS sniper. Al-Monitor has been told by officers in several trips to the front that they typically use bulldozers to cover IS bodies with dirt.

The afternoon of June 2, Al-Monitor witnessed bright white smoke from what could have been the firing of white phosphorus on medical facilities in a neighboring area. The following day, footage shot by television crews filming in the area supported that possibility.

In reaction to their claims, Human Rights Watch said the use of such munitions “raises significant concerns about potential harm to civilians from fires and intense burns” and called on Iraqi forces to protect civilians.

On June 4, Iraqi forces issued a statement saying that the reports were inaccurate.

In response to an email inquiry and photos of the brilliant white plumes produced by the attack, N.R. Jenzen-Jones, director of Armament Research Services, told Al-Monitor that what people may be observing is something being used as a smoke screen rather than as an offensive weapon in and of itself. "There is evidence that cargo projectiles employing white phosphorous as a smoke agent have been employed in Mosul during recent operations. Imagery suggests that these are M825A1 models or those sharing a similar design. The technical characteristics of these types of WP [white phosphorous] munitions — which are generally used for screening and marking purposes — and the methods in which they're employed are not comparable to offensive use of unitary WP munitions. Munitions in this former category are often inaccurately characterized by non-specialists, and the concerns associated with them are frequently overstated."

The Iraqi army says that whatever munitions were used were employed as smoke screens to help civilians escape and that they had been used repeatedly throughout the fight for Mosul.

US military officials have acknowledged using white phosphorus in "accordance with the law of armed conflict" but have not confirmed its use in Mosul, where it is becoming increasingly difficult to get the estimated tens of thousands of civilians left inside out safely.

As the fight continues for the last few sections of the city, besieged IS fighters are using whatever explosives and firepower they still have at their disposal.