3 reasons why partitioning Libya is a bad idea 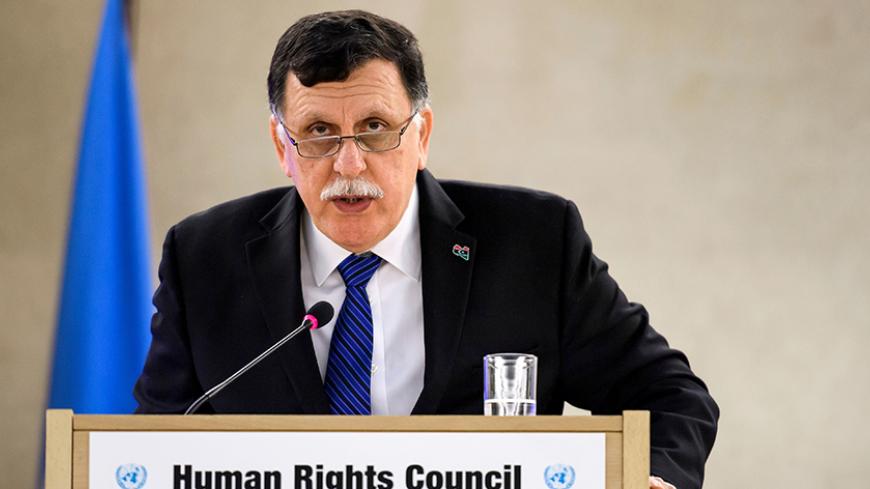 Fayez Mustafa al-Sarraj, the president of the Libyan Government of National Accord, delivers the opening speech of a meeting of the United Nations Human Rights Council in Geneva, Feb. 27, 2017. - FABRICE COFFRINI/AFP/Getty Images

In their final communique at the end of their two-day meeting in Italy on April 10, the foreign ministers of the Group of Seven yet again expressed their unequivocal support of the Libyan political agreement and its transitional government headed by Prime Minister Fayez al-Sarraj, while calling on all armed groups in the Libyan capital to “desist from actions that would exacerbate internal division and fuel further conflict.”

The G-7 is a group of major world economies including Italy, Germany, France, Japan, the United Kingdom, the United States and Canada, after Russia was kicked out because it annexed the Crimean Peninsula from Ukraine in March 2014.

What is worth noting in the statement on Libya is the clear expression of support to the country’s territorial integrity and unity, which clearly rejects any idea of a possible breakup of the country as a way of stabilizing it, since its quarreling factions have failed to accept any form of a political solution. The statement read, “We reaffirm our commitment to preserving the sovereignty, integrity and unity of Libya.”

The statement came just one day after The Guardian reported April 10 that Sebastian Gorka, an adviser to US President Donald Trump, had actually discussed the idea of dividing Libya into three regions based on the decades-old Ottoman division. The paper quoted well-placed sources as saying that Gorka not only discussed the issue with a European diplomat, but he also drew a map “on a napkin .… that cut Libya into three sections, apparently based on the old Ottoman provinces of Cyrenaica in the east, Tripolitania in the northwest and Fezzan in the southwest."

The Trump administration has failed to present a well-defined political position toward the future of Libya while also seeming to be sending mixed messages about the country. This is worrying not only Libyans who reject the idea of the partition of their country, but also European allies who have so far stood firmly behind the Libyan political agreement and the Government of National Accord as the only possible political game in town for settling the Libyan issue.

Libya has been engulfed in chaos and lawlessness since 2011, when its longtime leader, Moammar Gadhafi, was overthrown, with NATO support, and later killed, leading the country into an eight-month civil war that saw it become not only ungovernable but also a haven for terror groups, including the Islamic State (IS).

The Guardian also reported, “Gorka is vying for the job of presidential special envoy to Libya in a White House that has so far spent little time thinking about the country and has yet to decide whether to create such a post.”

Europeans are frustrated with the United States' lack of a clear position because they are at the doorstep of the complex problems coming out of chaotic Libya — be they IS launching attacks in many cities, such as Paris and Berlin, or migration and human trafficking across the Mediterranean Sea and onto southern Italian shores.

Dividing Libya is not the right way to solve its internal political and tribal disputes. Indeed, the idea of partition shows an extreme deficiency in knowlege about Libya's geographic and demographic situations.

One should keep in mind three fundamental reasons that make dividing the country a road map to a renewed civil war that would be more voracious this time than what the country has seen so far. First, Libya’s oil-producing and exporting region is located right in the middle of the country, with few producing fields in the western and southern regions. This makes dividing up oil revenues or actual oil production itself a far more complicated process than many would think.

It brings to mind a prediction Seif al-Islam Gadhafi, Gadhafi’s son and heir, made at the start of troubles against his father’s rule in 2011, when he said that if the country is divided, then Libyans will lose the oil, which is the country’s main lifeline.

In fact, disagreements on how best to divide oil revenues among Libyans is one of the stickiest issues and top causes of the little wars that have been taking place off and on in the North African country over the last six years.

Second, inter-tribal relations among Libyan tribes all over the country are very strong, and social relations among clans and families — including inter-tribal marriages — are stronger, making it almost impossible for people to accept the idea of dividing them up into separate countries. Tribes and clans are the cornerstones of Libyan society, making it too complicated to mess with.

The third reason division is not a good political option is that Libyans, in general, do not support any idea that might lead to breaking up their country. Even a federalist system — in which local governments have more say in their local affairs — does not enjoy much support.

Any attempt to solve the Libyan conflict must now include the Russians, who have been very busy with Syria and have provided little input into the Libyan crisis. But Moscow appears to be re-engaging different Libyan factions. On Nov. 29, Field Marshal Khalifa Hifter, the commander of the Libyan armed forces backed by the Tobruk-based government, visited Moscow and met with Foreign Minister Sergey Lavrov to seek his help in lifting the arms embargo imposed on Libya by the United Nations in March 2011. And in January, Hifter was received on board Russia’s flagship aircraft carrier, the Admiral Kuznetsov, while it was sailing back from its Syrian mission.

Meanwhile, on March 2, Lavrov received Sarraj, Libya’s UN-backed prime minister, urging dialogue among the different Libyan factions, including Hifter. This signaled the strongest message yet that Moscow is returning to the Libyan conflict.

Unless the latest developments in the Syrian war further upset the political status quo between Washington and Moscow, it is likely that both will find more common ground to agree upon in Libya. Both Russia and the United States worry about Libya becoming a safe haven for international terror groups, including IS, and both should realize that unless Libya is united, it will be easy prey for IS — which is under heavy pressure in both Syria and Iraq.