As Libyan voters elect a constitutional assembly to draft a new constitution, the country remains ungovernable in the proliferation of armed militias. 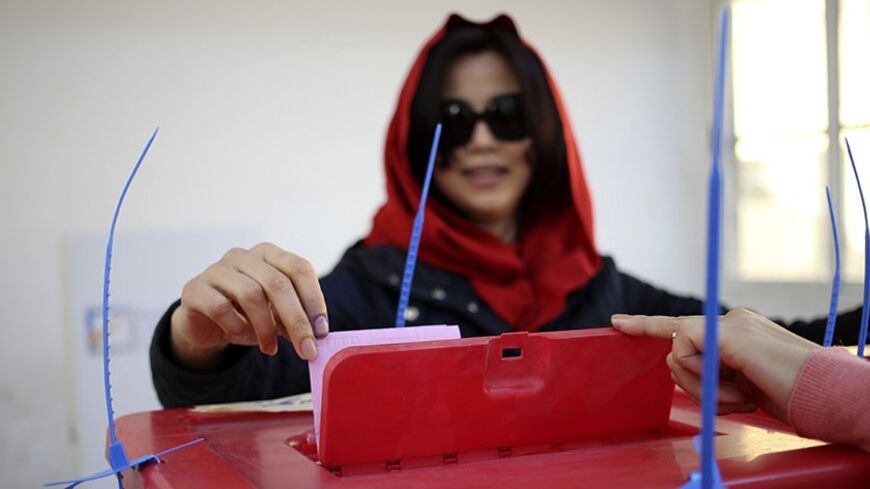 A woman casts her ballot during a vote to elect a constitution-drafting panel in Benghazi, Feb. 20, 2014. - REUTERS/Esam Omran Al-Fetori

Slightly more than a million Libyans went to some 3,800 polling stations Feb. 20 to elect 58 members of a constitutional assembly, or “committee of sixty” as it is called locally, which will draft the country’s first constitution since 1951. Voters chose from among 559 candidates purposely without political party representation, to help guarantee the independence of the elected body.

Nearly half of all registered voters were women, while the quota for women in the assembly was set at only six seats. The elections are based on a 1951 formula that divides the country into three regions — Tripolitania in the west, Cyrenaica in the east and Fezzan in the south — with each region allocated 20 seats. Such arrangements will prove to be a major hurdle in the future, once the elections are over and the results are in, because they further entrench division.

Despite there being 60 seats in the assembly, only 58 members will be elected because the two seats allocated to the Amazigh minority will not be contested due to that community’s boycott. The Amazigh do not believe the planned constitution — before it is even drafted — will guarantee their cultural and ethnic rights.

In July 2012, Libya elected representatives to the General National Conference (GNC), an interim legislature tasked mainly with drafting a constitution within a year. Since convening, however, the GNC has practically been paralyzed by infighting, corruption and threats by various militias forcing it to pass unpopular laws, such as the law of political isolation, aimed at purging former regime supporters from the bureaucracy. The GNC, filled with incompetent and corrupt members, has so far failed to deliver tangible results to increasingly disillusioned, frustrated and angry Libyans, pushing them deeper into disrepair. Despite recent demonstrations calling for the GNC to quit, the conference voted instead to extend its mandate until the end of the year and then tried to calm the situation by pledging earlier elections, by June 2014.

Since NATO-supported rebels overthrew Moammar Gadhafi in October 2011, following eight months of bloody civil war, the country has been ungovernable thanks to the hundreds of armed militias formed by criminals and former rebels that roam the streets, terrorizing the nation and challenging the weak central government. It is thus not surprising that nearly two-thirds of Libya’s eligible voters did not bother to register for the current elections, unlike in 2012, when people where enthusiastic and hopeful of building a new country after four decades under Gadhafi’s strong rule.

The lack of security and the weapons in the hands of the militias and bandits have transformed Libya into a very dangerous place for its people and for the region as well. Various extremist Islamist and jihadist groups, including al-Qaeda in the Maghreb, have long since established themselves in Libya — particularly in Derna and Benghazi in the east and the southern desert regions in the west bordering Algeria — Chad and Niger.

The enthusiasm and high hopes of Libyans two years ago have long since given way to feelings of betrayal and frustration with the lack of any progress whatsoever. While billions of US dollars have been spent, not a single infrastructure project has been completed, let alone started. When the revolt against Gadhafi began in February 2011, the entire country was a huge building site, with tens of building cranes dotting skylines across Libya. Today, however, nothing is moving, and oil production, the country’s main source of hard currency, has dropped to a quarter of what it used to be and almost half its pumping capacity.

Against this backdrop, the constitutional assembly will be elected with the majority of Libyans as disillusioned as they have ever been. Once elected, the assembly will find itself in a difficult, twofold predicament. First, it must deliver a final draft within four months from the date of its first meeting. This seems impossible given the messy situation on the ground and the lack of effective government control across the country. Second, its work will be based on a divisive formula, further institutionalizing the country’s divisions, because its election was based on a regional distribution of seats along existing dividing lines.

For the last year or so, Cyrenaica, or Burga, the eastern region, has practically governed itself, with increasingly louder calls for full autonomy that many Libyans suspect of being camouflage for complete independence. Meanwhile, the Fezzan region, in the south, is almost entirely outside the government's control, with its own separatist ambitions fueled by tribal wars, trafficking and strong tribal and ethnic connections to Libya's southern neighbors, particularly Chad and Niger.

By the end of the day, Libya will have its constitutional assembly, and hopefully it will be able to deliver a document by its four-month mandate. Any document risks remaining just that, however, unless Libya manages to overcome the little messes that have plagued the nation for the last three years. A constitutional document will help move things forward, but it is neither a guarantee of stability nor a prerequisite to a unified and strong Libya.