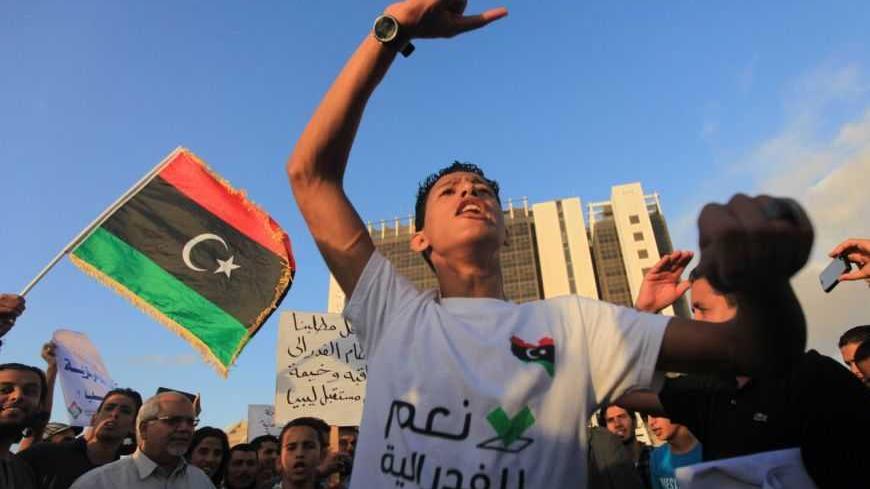 Libya will hopefully soon begin writing its new constitution. The task, of course, is quite monumental. But compared to Egypt and Tunisia, the two other Arab Spring countries with new constitutions, Libya’s task is made more difficult by the fact that it is embarking on the construction of a modern state almost from scratch, that there is a deep struggle over federalism and centralism, the volatile status of local armed groups, and that there is very little, if any, deeply entrenched historical constitutional literature and culture to anchor the debate upon.

The country had a constitution since 1951 under the monarchy, a short document of 35 articles that brought some codification to the rights of Libyans. When the monarchy was subsequently overthrown in 1969, a constitutional declaration of 37 articles was put in place by the new “revolutionary” regime, a document meant to remain in effect until a new constitution was put in place. However, what Libyans got instead as a constitution was an infamous and horrendous piece of literature written by Moammar Gadhafi called “The Green Book,” consisting of his often ridiculous ramblings on the world and his “Third International Theory.” Finally, in August 2011, the Interim Transitional Council issued a constitutional declaration of yet again 37 articles (which has since been amended) to cover the transitional period. That document, to be sure, has not been without some controversy, but it has relatively functioned thus far.

Nevertheless, Libya also has a few ways in which it is perhaps off to a better start than Egypt. For example, out of 200 members of Libya’s parliament, 33 are women (in part because of the design of electoral law, in turn inspired from Egypt only having 2% women in about 500 parliamentary seats). The composition of the assembly is arguably more balanced, and even some of the articles of the current constitutional declaration are relatively a good blueprint to develop upon. Having closely lived through the disappointing debacle that the new Egyptian Constitution and its drafting process turned out to be, and especially so compared to the still-troubled-yet-more-promising Tunisian Constitution writing process, there are a few lessons from what I perceive to be Egypt’s failures that I humbly hope Libyans can avoid:

1. Take Your Time: Egypt’s Constitution writing process was limited by the military-written constitutional declaration to six months, with a referendum set to be in two weeks of the adoption of the final document. The assumed rationale was to limit the available time so as to force what would essentially be a limited amendment of the 1971 constitution instead of going forth with a brand new document, one whose contents and nature could prove divisive or dangerously problematic, particularly with regards to any theocratic elements. The result, however, was that the country failed to sufficiently discuss the draft constitution while it was being written and after it was adopted by the assembly, opposition and other members walked out of the assembly toward the end, and Egypt was plunged in a political conflict that nearly brought down the state and still cripples political life, with real life casualties as a result. Furthermore, a close look at the results shows a substantially divided country on that constitution, particularly as you look at more urban demographics.

2. A Balanced And Representative Constituent Assembly: The ideological composition of a parliament does not necessarily reflect fully how a population is ideologically divided. Electoral results are influenced by national conditions, electoral logistics, swing voters, personal appeal of individual candidate, and more. Moreover, results can shift dramatically in each round. Libyans should avoid what Egypt did, in creating the Constituent Assembly heavily dominated by political parties and one political current. Instead, regardless of whether elections or appointments are chosen for the 60-strong Constitution Assembly, that assembly should truly reflect a balanced spectrum of the Libyan nation, with all of its ethnic, geographic, sectoral, religious and other demographic and political groups. Political party presence as a percentage in the assembly should be minimal at best. No sizable opposition should be able to claim that the process was unfair or biased from the start.

3. Bring Everyone Together: Despite the grandiose hopes since February 2011, Egypt’s constitutional referendum witnessed the lowest turnout in any of the many votes since the revolution, was fraught with insufficiently investigated violations, and — at face value — showed increasing national polarization as well. Instead, Libyans should work together to create a true consensus document that can win the approval of at least 70% of the electorate. Furthermore, a minimum threshold for adoption of the constitution in the referendum, no less than two-thirds of the electorate, should be mandated. A strong, widely trusted and independent body should oversee the referendum, be sufficiently immune from political pressures, make sure that no potential violation is ever left without satisfying investigation. Leave no room for a real conflict surrounding the proceedings and results of the referendum.

4. Less Is More: The U.S. Constitution is the shortest, yet also often the most celebrated Constitution in the world. The United Kingdom does not even have an integral and unified constitutional document. There is no absolute need for a lengthy and ultra-detailed constitution. Focus on the genuine essentials in the constitution, and leave much of the rest for the body of law itself. This way, more contents could be adapted more easily with the passage of time.

5. And Start With What You Agree On: Libyan political forces and the members of the Constituent Assembly should start by codifying all the ideas and principles they agree on, and making that consensus known to the public. This would immediately set a strong reassuring message to local and world public opinions, set a good start for constitutional dialogue, and allow sufficient focus from the start on what are truly debate issues. If something proves to be truly divisive and unlikely to be easily resolved, it might be best to keep it out of this first referendum-bound constitution, and leave it until further debate and potential adoption as a future amendment.

6. Rights And Freedoms as The Heart Of The Constitution: Whether a detailed listing will be inside the constitution itself or rather in a separate bill of rights, human and civil rights should be the driving force of this document. Enshrining and protecting the freedoms, rights and dignity of each individual citizen and every group in the country should be the true raison d’être of the constitution. In addition, and worthy of individual mention as a guardian of democracy, freedom of media in particular should be very well enshrined in the charter.

7. Transparency and Privacy: While constituent assembly members will definitely need degrees of legitimate privacy to go through the more delicate and controversial discussions, there should be nonetheless a strong focus on transparency and disclosure in general in the assembly. The public should regularly know where things stand, and what are the issues on the table.

8. Civilian Control: Unlike what continues to exist in Egypt, Libyans must ensure that their new constitution guarantees full civilian control over the army and the interior security establishment.

9. Dealing With The Past: Political disenfranchisement laws are a bad idea and just prone to abuse, and the current debate over them in Libya precisely shows that. If anyone associated with the Gaddafi regime made a clear and punishable crime, then he should be prosecuted. Otherwise, take a long breath, then empower and trust the voters when the time comes.

10. Protect The Future: Egypt’s new constitution allows for the repetition of the many  the tragedies of the Mubarak era, despite early political consensus on constitutionally immunising Egypt against them. In Libya’s case, the new constitution must — among others — prevent an improperly strong concentration of power in one branch of government and the executive branch in particular, ensure a wide participation of all Libyans in political and economic life, empower civil society, usher in a pluralistic democracy, build a truly transparent state, and bring forth a working political and economic relationship between Libya’s three main geographic regions.