Following the revolution against Moammar Gadhafi’s regime in 2011, his son, Seif al-Islam Gadhafi, made extensive predictions about Libya’s political, social and economic future — which have been proved right. 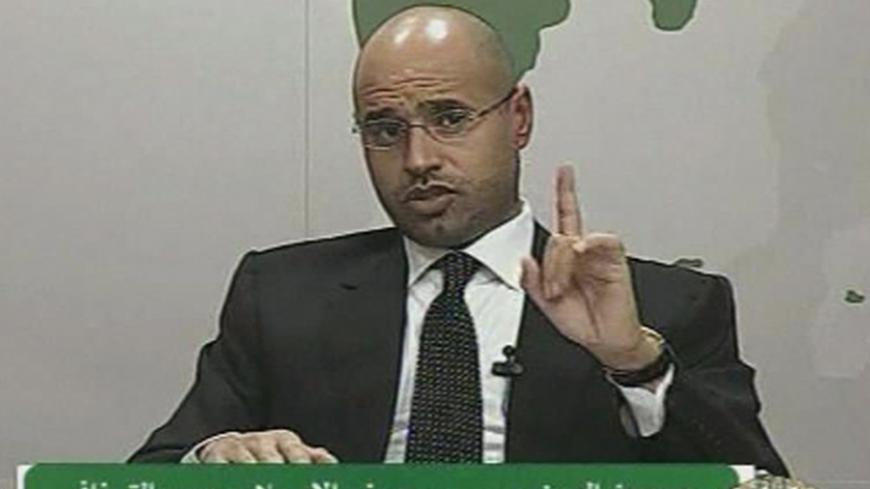 Seif al-Islam Gadhafi, son of Libyan leader Moammar Gadhafi, gestures as he speaks during an address on state television in Tripoli in a still image taken from Libyan television, Feb. 20, 2011. - REUTERS/Libyan TV

When eastern Libya erupted in protest against the regime of Moammar Gadhafi on Feb. 15, 2011, it took Seif al-Islam Gadhafi — Moammar Gadhafi’s son and favorite heir at the time — a full five days to appear on state TV to explain to the nation what was going on. After that famous speech, Seif al-Islam Gadhafi was accused by many Libyans, outside observers and even the International Criminal Court of inciting violence and threatening his countrymen that they either had to stop all anti-government activities or face the consequences.

Not many people paid any attention to the predictions he made about the future of Libya. Five years on, however, most of what the young Gadhafi predicted has proved accurate.

Among other things, he predicted Libyans would lack security, the country would descend into chaos and lawlessness, many Libyans would die, the West would intervene and the economy would collapse because the oil would "cease to flow.”

He also warned Libyans against dividing the country and having fanatic Islamic organizations take over some areas, if not all of them. He said many Libyans would be displaced inside and outside their country, repeating the same pattern of 100 years ago when Italy occupied Libya in 1911, forcing thousands to migrate to neighboring countries.

Seif al-Islam Gadhafi spoke for almost 40 minutes predicting that oil would be burned and what remained would hardly be useful to the country. Indeed, in the first nine months of 2015, Libya’s crude oil production averaged just slightly more than 400,000 barrels per day, significantly below the 1.65 million barrels per day average the country produced in 2010.

Oil tanks supplying cities such as Tripoli were set on fire in July 2014, and about a dozen oil tanks in Ras Lanuf oil terminals, where most exports take place, were set ablaze by the Islamic State as recently as January.

The terminals were taken over by an armed militia that was supposed to protect them; all exports from those terminals have been suspended since late 2013. Last summer, one of the major oil fields to the south of Ras Lanuf was completely destroyed by another militia believed to be made up of nearby residents angry over jobs that were promised to them by National Oil Corp. but never actually materialized.

Power shortages have been a part of life across Libya since 2011. Gadhafi also predicted that his country could very well be divided again as it was before the country gained independence in 1951. It was divided into three regions: Tripolitania, Cyrenaica and Fezzan. Five years after the revolution, Libya is moving ever closer toward the situation since it lacks a central government, a unified army and functioning state security.

The younger Gadhafi also talked about arms availability and its consequences. Libyan lawmaker Saleh Jaweida estimated that there are nearly 20 million weapons in the hands of the people, which could explain why the murder rate is rising and why small quarrels could easily turn into wars between tribes and gangs. However, accurate data is lacking.

While there are no precise figures for the total number of war deaths that engulfed the country in 2011, former Health Minister Naji Baraka estimated in 2011 this to be around 30,000 deaths with 50,000 injured, prompting the successive governments to create the Ministry of Martyrs, Injured and the Missing, which is in southern Tripoli’s Damascus district.

It is only fair to say that Gadhafi predicted a terrible future for his people and five years on, they are living that very future. Gadhafi said, “We might return to the days of poverty,” which has happened. Despite the lack of official figures, observations reveal that thousands of families can hardly make ends meet. According to UN figures, at least half a million people are displaced from their homes inside the country; many in the refugee camps across the country depend on charities. The black Libyans are singled out for severe retribution since they are tagged by the rebels as pro-Gadhafi.

The Libyan banking system is collapsing slowly under the heavy weight of corruption and embezzlement, and above all the lack of liquidity, making it difficult for people to access their own savings. Government salaries are usually paid three months late.

Seif al-Islam Gadhafi certainly wanted to defend his father’s reign, but in the process he not only predicted what would happen, but also pointed out that Libya is not the same as Tunisia or Egypt. Libya, he said, is made up of “tribes and clans, which make it harder to bring [society] together if it collapsed.”

Five years on, he has been proved right. While the civil war of 2011 divided Libyans along tribal lines, pushing the country further toward partition, it also made it difficult for any central government to take root. The average time a single central government stayed in office is less than a year. And today, Libya has two different governments competing over what remains of the country. A UN-brokered government of national accord is already in trouble before it could even be sworn into office.

Today, Libya is home to all sorts of fundamentalists and terror groups, be it al-Qaeda in the south or IS in the cities of Sirte and Sabratha. The latter was the target of US air raids Feb. 19, with nearly 40 deaths in what the US army claimed to be a training camp for IS.

In southern Libya, along the borders with Chad and Niger, al-Qaeda in the Islamic Maghreb dominates the trafficking trade, including arms and migrants, in the absence of a strong Libyan government able to control its borders.

IS, for example, wants an Islamic country where its own version of Islam is practiced and dissent is dealt with through weapons. The Islamic-backed government in Tripoli has already started reviewing all laws to bring them in line with Sharia, further enabling Islamist propaganda to dominate Libya. Preachers and religious fanatics now run mosques and offer TV and radio programs that poison the minds of young Libyans, and in the process alienate more Libyans from the forgiving Islam they have always known and practiced.

The younger Gadhafi further predicted that foreign intervention in Libyan affairs will make it difficult for Libyans to reconcile among themselves. Libya now is dominated by regional and international powers, particularly Qatar, Egypt, Turkey and, of course, the permanent UN Security Council members that dictate what should and should not happen in the country through resolutions that are hardly enforced. Much of the fighting that has erupted in Libya since the uprising in February 2011 has been proxy wars between other countries fought by Libyans on Libyan soil.

Gadhafi also warned his countrymen that the West will not accept any form of Islamic emirates on Libyan shores very close to the southern European borders. Today, the West — particularly France — is preparing a new intervention in Libya to dislodge IS from Sirte and other cities.

Many Libyans and much of the world now acknowledge that Gadhafi’s speech accurately predicted the current situation on the ground.