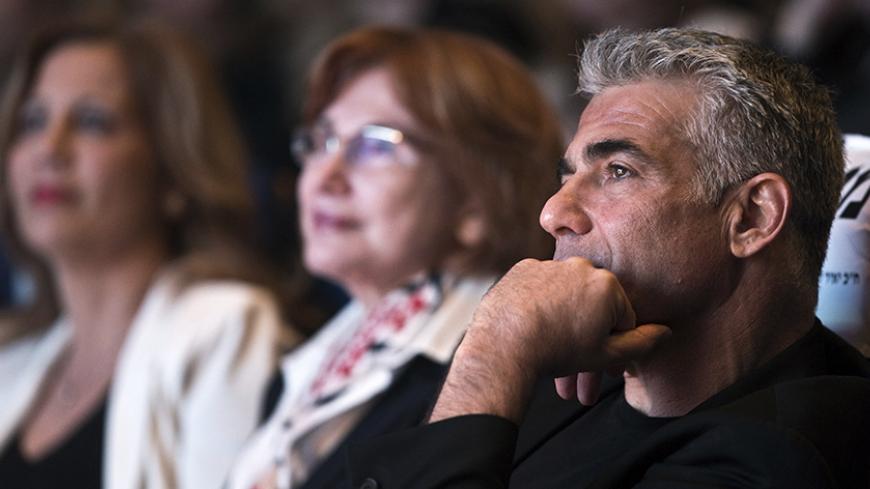 Throughout the entire coalition crisis surrounding the new Public Broadcasting Corporation — with Prime Minister Benjamin Netanyahu threatening early elections over its launching — Yesh Atid Chairman Yair Lapid was careful not to veer from the campaign discipline he decreed upon himself over the past year. He kept acting in an official manner on behalf of the entire nation at any cost.

While the chairman of the opposition, Isaac Herzog (Zionist Camp), contacted various political leaders in a hopeless effort to cobble together an alternative government and made a point of announcing what he was doing in media interviews, Lapid not only distanced himself from the initiative. He even expressed his reservations about it and dismissed its feasibility.

"I don't like political games," Lapid announced in a March 23 interview with the Walla! website at the height of the crisis. He said, "If the government falls, we will go to elections, and if the government doesn't fall, we won't go to elections. People here are playing the 'Let’s pretend' game, but the fact is that there is no possibility of presenting an alternative government. No government will be established here on the basis of a single vote from [Arab Joint List party member] Haneen Zoabi. I do not think that it would be legitimate for her to determine Israel's fate." Referring to the Knesset’s power balance, Lapid rejected attempts to create an alternative government, which would need Zoabi’s support to garner a majority.

These statements by Lapid are the byproduct of a precise, carefully orchestrated campaign strategy. Over the past few months, this campaign made him the leading contender for the prime minister's office, the one person who runs head to head against Netanyahu in all the polls. It is Lapid who threatens the current prime minister's political hegemony.

As a disciplined campaigner, Lapid did not exploit the serious political crisis to take potshots at Netanyahu, like the leaders of the other opposition parties did. Rather than letting himself get carried away by them, he stuck firmly to his image as the leader of the party that is concerned with the nation as a whole. He portrayed himself as someone who is not interested in taking part in the political gamesmanship of the left, is not worried about elections and exudes confidence. While doing that, he also managed to impugn the reputation of Zoabi in a way that distances him from the Arab parties and the left and which bolsters his reputation as someone who is, at his core, aligned with the right.

Throughout the entire coalition crisis, Lapid insisted on sticking to his own agenda. So, for example, on March 24, at the height of the crisis, he wrote a Facebook post condemning the United Nation's Human Rights Council, opening with the words: "The insanity continues." He continued lambasting the council, writing, "The United Nation's Human Rights Council met this weekend in Geneva and passed nine resolutions condemning various situations around the world. Four of these resolutions condemned what is happening in Syria, Iran, South Sudan and North Korea. The remaining five condemned Israel, the remarkable, fair-minded, law-abiding democracy, which is struggling for its existence. Yet they condemned it more than all the rest of the world put together! Of course, not a word was said about the Palestinians, about anti-Semitic incitement …"

Nationalism, patriotism and love of Israel are essential parts of Lapid's strategy, which is intended to place him in the prime minister's office. This includes his war against the boycott, divestment and sanctions movement, attacks on anti-occupation group Breaking the Silence, his boycott of the Haaretz newspaper, and his stories, whenever he gets a chance to tell them, about how he grew up in a nationalist, Likud home. Lapid cracked the code of the Israeli mainstream, just like Netanyahu cracked the code of the Israeli right. While Netanyahu uses party-based rhetoric pitting right against left, Lapid discovered that unifying rhetoric is the fount of his seats in the Knesset. As someone who based his 2013 election campaign on his war against the ultra-Orthodox and won 19 seats with it, Lapid is now doing everything he can to heal the rift between him and them as part of his strategy of reconciliation.

A poll conducted at the end of the coalition crisis and released by Channel 10 on April 4 shows that Lapid's "official" behavior increased the number of seats he would win even more. His party, Yesh Atid, would win 29 seats, while Netanyahu's Likud would win 27. Furthermore, Lapid is continuing to improve in the polls asking about the suitability to serve as prime minister. He receives 18%, second only to Netanyahu, who receives just 23%.

What makes this achievement exceptional is that Lapid does not even hold the position of chairman of the opposition, since he only has 11 seats in the current Knesset. Nevertheless, he has managed to position himself as an alternative to Netanyahu. More so, Lapid overtook in the polls the role of opposition leader, but he has actually succeeded in positioning himself as an alternative to Netanyahu within Netanyahu’s own right-wing camp. We have already noted how Lapid is careful to use right-wing political rhetoric. What he offers, however, is an alternative to Netanyahu's divisive style, given how tired the public is of him, of the corruption charges that are sticking to him, and of his political games and trickery.

One outstanding feature of Lapid's strategy is his extreme caution not to attack Netanyahu personally. Lapid is no longer willing to use aggressive slogans against the prime minister, as he did in the past. Then there is the way that he is signaling to the ultra-Orthodox and the right. He is doing everything he can to draw closer to Shas Party Chairman Aryeh Deri, the very person he once argued could not serve as interior minister because he is a convicted felon. In stark contradiction to this careful attitude, there is the divisive language he uses about the left. This is the formula that his American Jewish adviser Mark Melman put together for him, and it is proving effective.

The fact that Lapid has been soaring steadily in the polls has raised quite a few eyebrows, particularly since he rarely speaks about controversial issues. Lapid is now reaping the benefits of a thorough ground campaign, which he himself leads almost every evening, crisscrossing the country, with an emphasis on Likud strongholds. Lapid's appearances always draw a large crowd. After all, as a former TV journalist he is a "celebrity" who knows how to put on a show. He has a more or less steady presentation lasting about 20 minutes, in which he lays out Yesh Atid's "7 Point Plan," and then he answers questions from the audience. Lapid uses self-deprecating humor with an attitude that is not at all condescending. Even in these events, he makes a point of being "official" and spreading his messages of unity.

According to the polls, this activity has a cumulative effect on those Likud supporters considered to be "right-wing light." They see Lapid as an alternative to Netanyahu, someone new and different with whom they can live. If it intensifies, this trend could be the tie-breaker between the two blocs in the next election.