US President Donald Trump’s Middle East team is exploring the possibility of a double-track initiative for Israeli-Palestinian and Middle East regional talks. 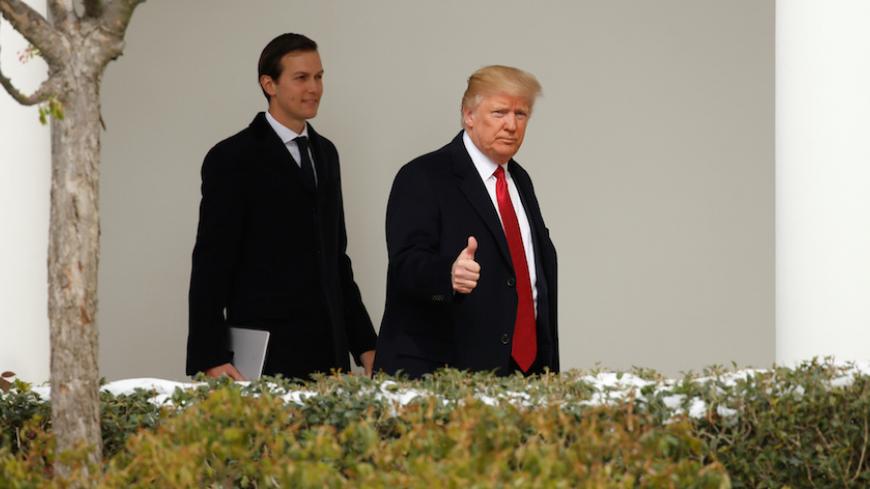 A senior Israeli Ministry of Foreign Affairs official in the know on Israeli-US relations told Al-Monitor that in recent days Israel has been approached by senior officials in the Trump administration about a possible US policy initiative related to the region and to Israeli-Palestinian peacemaking. Trump’s staff is currently preparing his first official visit to Israel (apparently on May 22), yet these preliminary contacts were exploratory in nature. The US officials emphasized to their Israeli counterparts that no decision has been made yet by Trump’s Middle Eastern team and his associates, including secretaries of the State and Defense departments, head of the National Security Council, and advisers Jared Kushner and Jason Greenblatt.

According to the Israeli source who spoke on condition of anonymity, the US officials did say expressively that in any case Israeli security interests will be taken care of “as never before.” What concerned the senior Israeli Ministry of Foreign Affairs official was a request to know Israel’s position on a possible qualified acceptance of parts of the Arab Peace Initiative of 2002. In the Israeli source’s view, this request indicates that the Trump administration has been influenced by Arab interlocutors such as Egyptian President Abdel Fattah al-Sisi, King Abdullah II of Jordan and Palestinian President Mahmoud Abbas, who all expressed in similar terms that the Arab Peace Initiative is the only possible basis for regional progress on the Palestinian issue.

A seasoned Middle Eastern expert, who advises Trump’s Middle East team, told Al-Monitor that the Trump administration has three priorities in the Middle East region: the defeat of the Islamic State (IS), a cease-fire arrangement in Syria that sidelines Syrian President Bashar al-Assad and a regional agreement on Israeli-Palestinian peace.

According to this adviser, the administration wants to work with the pragmatic Arab coalition of Egypt, Jordan and Saudi Arabia on all three efforts. He emphasized that linking President Donald Trump’s interest for a deal on the Israeli-Palestinian issue to other regional issues, such as fighting IS, would be a mistake. These are three distinct goals. Trump has genuine ambitions to outshine all previous US presidents on a peace deal between Israel and the Palestinians, regardless of his ambitions on the other regional problems.

The adviser argued that Trump is concerned about Israeli Prime Minister Benjamin Netanyahu’s willingness/unwillingness and political ability to make reasonable progress on the issue and about Abbas’ political weakness. Yet he intends to move forward on the matter with the leaders of the pragmatic Arab coalition and plans to dispatch Greenblatt to the region again in the near future. The Arab Peace Initiative is, in Trump’s eyes, a vehicle for progress. He does not endorse it verbatim, but believes its value lies in the possible normalization of relations between Israel and the Arab countries.

A senior PLO official close to Abbas told Al-Monitor that Abbas, in his talks in the weeks to come with Trump, will lay out his interpretation of the Arab Peace Initiative, emphasizing three main aspects. For Abbas it is absolutely necessary to define a border on the 1967 lines with only minor and parallel land swaps, that East Jerusalem serves as the Palestinian capital and that the issue of refugees be resolved in a just and agreed manner.

Abbas is willing to push toward the normalization of relations between Israel and the Arab countries.

The adviser to the Trump team in Washington told Al-Monitor how the administration may use parts of the Arab Peace Initiative in a future regional process. The idea is to have two parallel tracks to be guided and monitored by the administration: bilateral Israeli-Palestinian negotiations without any US impositions on a joint peace settlement between the parties, and a regional track with Israel, the Palestinians, Egypt, Jordan, Saudi Arabia and Morocco on gradual progress toward normalization with Israel beginning immediately. According to the adviser, it will take several weeks for this plan to be finalized.

As for the Ministry of Foreign Affairs official, he is confident that Netanyahu will have the last word with Trump, and that the talks about the Arab Peace Initiative are only background noise for the Arab anti-IS coalition.