Israeli intelligence branches are reassessing the Syrian threat of weapons of mass destruction following the gas attack in Idlib on April 4. 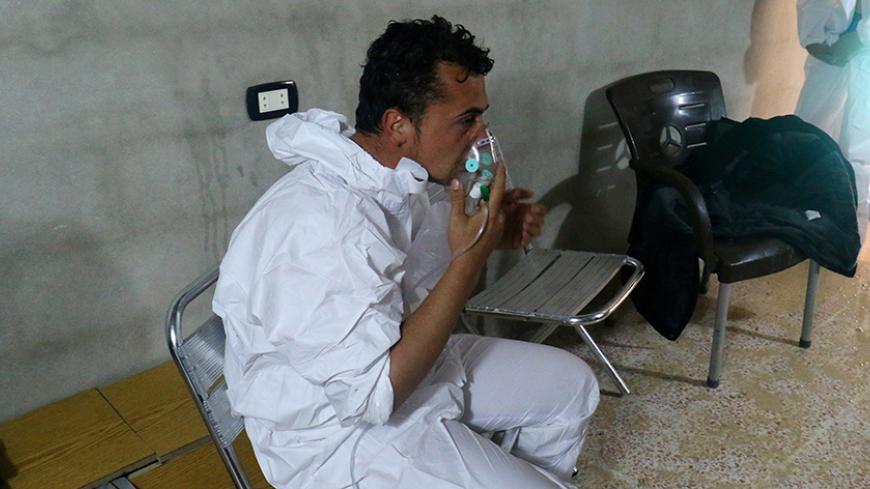 A man breathes through an oxygen mask after what rescue workers described as a suspected gas attack in the town of Khan Sheikhoun in rebel-held Idlib, Syria, April 4, 2017. - REUTERS/Ammar Abdullah

The horrifying images of the gas attack in Idlib on April 4 shocked many in Israel and led to a wide range of responses in the country, including a call for an emergency Cabinet session by Minister Naftali Bennett.

The Israel Defense Forces' (IDF) Intelligence Division and the Mossad seem to have suffered the greatest shock, however, since they are responsible for assessing the chemical weapons capabilities of the Syrian regime. The fact that the regime is suspected of using sarin nerve gas against the population casts their current assessments into doubt and challenges Israel's working assumption about when Syrian President Bashar al-Assad might use any chemical weapons still in his possession. Just two weeks ago, two senior intelligence sources told Al-Monitor that Assad has very limited chemical weapons capacities, mainly chlorine gas. These weapons were described as "neutralizing," i.e., they can kill their targets but not on a wide scale. Photos from Idlib contradict this statement.

Both the IDF's Intelligence Division and the Mossad concluded that the agreement had been fulfilled in its entirety, and that Assad did, in fact, forgo this strategic asset. According to intelligence sources, Assad was concerned that an American cruise missile and aerial assault would lead to the final collapse of his regime. In other words, he did have "his back against the wall," and decided to give up his chemical weapons arsenal to survive. Israel believed that the Syrian regime kept only "residual" chemical capabilities, i.e., something symbolic, or an "emergency supply" of chemical weapons, to be used only if Assad is forced to flee for his life. The same Israeli assessment also claimed that some 98% of Assad's arsenal of sarin or VX nerve gas (about 1,300 tons) no longer existed.

If it was, in fact, Assad, who used nerve gas in Idlib on April 4 (no one else is capable of launching such an attack), these assessments by Israeli and other sources have been invalidated.

This has long-term implications. After reaching an agreement that Syria would rid itself of its chemical weapons stockpiles, it seemed obvious to Jerusalem that Israel was out of danger when it came to the use of weapons of mass destruction (WMD) against its population. This assessment of the situation led Israel to abandon existing procedures to defend civilians from chemical weapons. Until then, every Israeli citizen received a chemical weapons defense kit from the government, which included a gas mask and other equipment. It was a convoluted and expensive setup, which was difficult to maintain (every newborn needs new equipment, mask filters must be replaced, etc.), but it remained in force as long as Israel felt threatened. And so, ever since 2013, this defense procedure was abandoned, and the manufacture of gas masks in Israel came to a halt. The April 4 incident in Idlib raises questions about that decision.

A senior Israeli source told Al-Monitor on condition of anonymity, "Assad is well aware that if he dares use chemical weapons against Israel in his current state, he will be wiped off the map by morning." Yet even this statement sounds problematic now. Assad is backed by Russian President Vladimir Putin, and it looks like the April 4 massacre in Idlib will pass without Assad suffering as much as a scratch. The Syrians deny that they used gas, the Russians claim that the Syrian regime bombed a rebel gas factory and the Americans blame Trump. That's it.

The shock in Israel on April 4 was resounding. As a people, Jews are especially sensitive to the use of gas, even if it happens beyond their borders in a hostile nation. Images of children suffocating from nerve gas sent shockwaves through the media and led to responses by everyone from Prime Minister Benjamin Netanyahu to opposition leader Isaac Herzog. Former head of Military Intelligence Maj. Gen. (Res.) Amos Yadlin even called for Israeli military intervention. Yadlin, who heads the Institute for National Security Studies and maintains close ties with the military establishment, later explained that he meant an aerial response, not necessarily overt, which would target Syria's chemical weapons division and even attack the aircraft allegedly responsible for the gas assault.

Within a day, the mood started to calm down. One senior Israeli military source told Al-Monitor on condition of anonymity, "Ultimately the basic situation hasn't changed. So it is possible that Assad does have a small supply of nerve gas, amounting to a few dozen or perhaps a few hundred kilograms. And it is possible that his recovering self-confidence allowed him to use the weapons locally, in Idlib. That still doesn't change the basic situation in the region."

Not everyone agrees with this assessment. It is safe to assume that quite a few meetings about the situation took place in Israel's various intelligence agencies and divisions the night of April 4. If Assad really is capable of using nerve gas during a local incident in Idlib, it indicates that this is a different, new and more dangerous Assad, as one senior Israeli source told Al-Monitor.

And there is another issue. Who can now assure Israel that Assad has not managed to transfer some of that residual nerve gas to Hezbollah? A transfer of chemical weapons can be very low key, without any long convoys or heavy trucks. Hezbollah could then use Iranian technology to install the gas on its missiles. The result would be a very different Hezbollah than what Israel has been used to until now.

These horrific scenarios still sound unfounded, but in the Middle East, unfounded scenarios sometimes turn into reality. At this stage, there can be almost no doubt that Israel will need to reassess its intelligence and working assumptions and reconsider what steps to take in response to the WMD held by Assad, and especially by Israel's most imposing enemy today: Hezbollah.