How Israel’s president is shifting his country’s worldview

Israeli President Reuven Rivlin objects to the worldview where all threats to Israel are considered through the prism of the Holocaust, as preached by Prime Minister Benjamin Netanyahu. 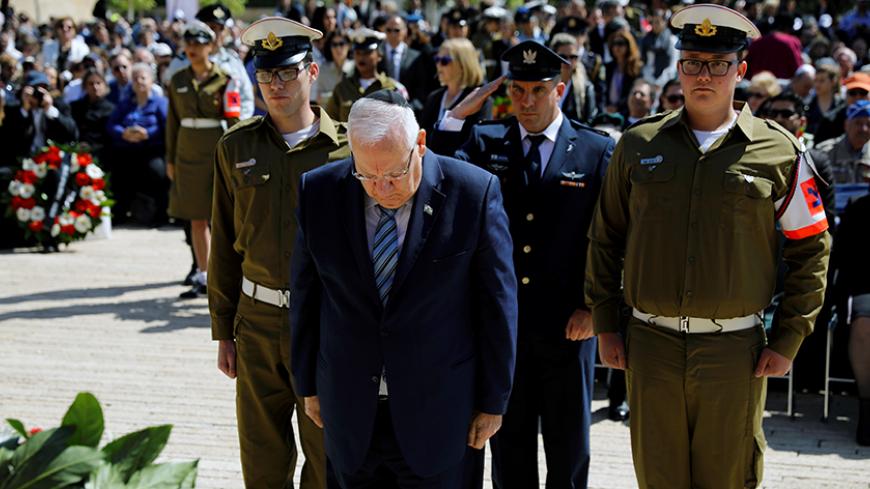 In his official speech at the Holocaust memorial museum Yad Vashem on the eve of Holocaust Remembrance Day (Yom HaShoah) on April 23, Israeli President Reuven Rivlin decided to challenge the idea that the Holocaust is "the lens through which we view the world." It was a refreshing and important approach.

Rivlin's speech made headlines and caused a buzz on social media, not least because of his bold statement that the very idea that "any criticism of the State of Israel is anti-Semitism … is fundamentally wrong, and is dangerous for us a nation and as a people. No less than this, it is dangerous for the memory of the Shoah."

Although his remarks challenged the approach suggested later in the same ceremony by Prime Minister Benjamin Netanyahu, any attempt to drag Rivlin's speech into the political arena would be doing it an injustice. Instead, this opportunity should be used to engage in an in-depth discussion about Israeli society's attitude toward the Holocaust, seven decades after the atrocities. Israelis must ask themselves whether they should change their perception of themselves from that of a persecuted victim, constantly threatened by a second Holocaust, to one rooted in strength and self-confidence.

Rivlin abandoned the established rhetoric of official speeches on Holocaust Remembrance Day, attempting to challenge the conventional discourse by an approach that was a bit more complex. He said, "The more time that passes, the fewer the surviving witnesses to the horrors, the older the State of Israel, so our need to deal with how we relate to the Holocaust and to Holocaust remembrance becomes ever more crucial."

He continued to present the two prevalent approaches today, both of which he considers dangerous. The first is the "universalist approach," which considers the Holocaust to be just one out of many cases of genocide that occurred throughout human history. The second regards the Holocaust as the main justification for the existence of the State of Israel and the prism through which it should assess the world.

According to the president, the universalist approach is a dangerous approach because it downplays the Shoah, distorts history and denies the German program of systematic extermination that was aimed specifically at the Jewish people. He then added, "It denies anti-Semitism, a malignant disease that is 2,000 years old. … [It] negates the uniqueness of the Holocaust as a historical event that has no parallel, that happened to us, the members of the Jewish people."

This second approach, identified with Netanyahu, was described by Rivlin as follows: "The justification for the existence of the State of Israel is the prevention of the next Holocaust. Every threat is a threat to survival, every Israel-hating leader is Hitler. According to this approach, the essence of our collective Jewish identity is escape from massacre by joint means. And the world is divided into two: the 'Righteous among the Nations' on the one hand, and anti-Semitic Nazis on the other. And in any case, any criticism of the State of Israel is anti-Semitism. This approach also is fundamentally wrong and is dangerous for us a nation and as a people. No less than this, it is dangerous for the memory of the Shoah."

Rivlin emphasized the severity of the threats faced by the State of Israel, but said that these should not be seen as some be-all and end-all. "There is no doubt that in the period since the Shoah we have stood at historic crossroads, moments when we have sensed the threat of 'the Destruction of the Third Temple/Homeland,' and of course, the State of Israel may find itself under threat to its very existence. However, we have a state, we have an army. … The Shoah is permanently branded in our flesh. Each of us has a number on our arm. Nevertheless, the Shoah is not the lens through which we should examine our past and our future."

Rivlin then proposed a third approach, which makes it possible to remember the Holocaust as an inconceivable human crime targeting the Jewish people with a methodical plan to exterminate them, while at the same time adopting a healthy and mature attitude toward what happened. "We shall always undertake our own defense … the State of Israel is not compensation for the Holocaust, but the Holocaust teaches us that we must take our fate in our own hands. The Jewish people have the right and the duty to maintain a defensive force, national independence, sovereignty, here in our historic homeland."

In his speech, Netanyahu expanded on the theme of hatred of the Jewish people and of the dangers still lurking for Israel today. He said, "The new-old anti-Semitism is widespread in certain circles in the West, and it is also common in UN institutions."

The palpable difference between Rivlin’s and Netanyahu’s speeches, particularly at an official ceremony that is supposed to present a cohesive message, had many listeners contrast the two men's messages. Former Prime Minister Ehud Barak wrote on Twitter that there were "Two speeches on the eve of Holocaust Remembrance Day. Rivlin's was an official speech showing leadership and self-confidence. Netanyahu's expressed anxiety and sowed fear, while raising historic threats."

Zionist Camp Knesset member Merav Michaeli also praised Rivlin for his remarks, tweeting, "Note the president's important comments: The idea that any criticism of Israel is anti-Semitic is dangerous to the State of Israel and the memory of the Holocaust."

Rivlin is identified with the Likud. He is clearly a right-wing liberal, though that places him in a camp that has lost much of its strength over the past few years to the populist, nationalist right. That's why it is so easy to turn his Holocaust Remembrance Day speech into a political attack. On the other hand, Rivlin is consistent about his positions and his worldview. His remarks are not some heretical rejection of right-wing positions, even if they run counter to Netanyahu's own comments of the past few years, comparing the Iranian threat to the Holocaust.

In his speech, the president offered Israelis a contemporary perspective on the Holocaust, far removed from the Diaspora approach of former Prime Minister Menachem Begin, who once described the 1982 war in Lebanon as an attempt "to prevent another Treblinka."

The day after his speech, Rivlin gave a concrete example of the approach he spoke of. At another speech, this one at Kibbutz Lohamei HaGeta'ot, established by ghetto resisters who immigrated to Israel, he criticized France's right-wing presidential candidate Marine Le Pen, who shirks responsibility for her country's own role in the extermination of its Jewish population during World War II. "Some two weeks ago, a French presidential candidate denied France’s responsibility for the deportation of its Jewish citizens to the Nazi concentration and death camps," Rivlin said. "As a sovereign state that has gained national independence, we have a duty to demand from other nations and states not to evade responsibility. … We must wage a war against the current and dangerous wave of Holocaust denial. We must resist the renunciation of national responsibility in the name of alleged victimhood."

With these comments, the president showed that it is possible to foster awareness and even criticize contemporary manifestations of anti-Semitism without resorting to pronouncements of rage and destruction.