The scars of the Holocaust are ingrained in the Israeli experience, and in Israel's relations with — and fears of — its neighbors, writes Ben Caspit. 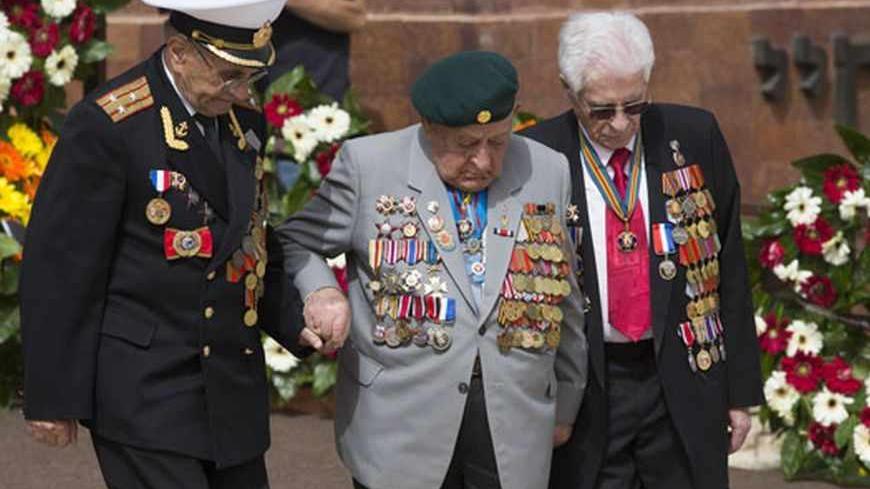 World War II veterans return to their seats after laying a wreath during a ceremony marking Israel's annual day of Holocaust remembrance, at Yad Vashem in Jerusalem, April 8, 2013. - REUTERS/Ronen Zvulun

On Monday [April 8], US Secretary of State John Kerry stood at attention and observed two minutes of silence as mourning sirens wailed throughout Israel, just as they do every year, to mark Holocaust Remembrance Day.

This was followed in the Knesset by a ceremony titled “Every Person Has a Name.'' As in previous years, the nation’s elected representatives step up to the podium, one after the other, to read out names of the Holocaust’s victims. More than 70 years after the end of World War II, in which one-third of the Jewish people were exterminated by the premeditated, precise and unprecedented Nazi machinery of death, the trauma is still as etched into Israel’s collective DNA as if it happened last week. The generation of survivors is rapidly disappearing. There are only 200,000 Israelis left who actually experienced the horrors firsthand. But the second and third generations continue to stand with their parents and grandparents in the shadow of the death chambers, making solemn vows never to forget and “Never again!” An entire nation marches behind them. Millions of Israelis continue to live under the long shadow that this unfathomable event still casts on their lives, even today.

In order to understand how hard it will be to solve the Palestinian-Israeli conflict, it is vital to have an intimate knowledge of the Israeli experience of the Holocaust. Knesset Member Dr. Ahmad Tibi, perhaps the most outspoken Palestinian-Israeli parliamentarian on all matters pertaining to the conflict, has managed to achieve this. Instead of denying the Holocaust, Tibi studied it. He visited the Holocaust Museum in Washington and the Holocaust Memorial and the Jewish Museum in Berlin. A speech he delivered to the Knesset just a few years ago [January 2010] was one of the most important and also one of the most riveting ever given about this topic in the Israeli legislature, explicitly because it was delivered by a Palestinian patriot. Tibi claims that it is incumbent on every human being, by very virtue of being a human being, to know about what happened there and to admit that this was the greatest crime against humanity ever committed in the history of humankind. After saying that, he is always careful to note that the fact that the Jews were victims of such an abominable crime does not give them the right to turn another nation into victims too. “Why must we bear the guilt if they abused you?” he asks. And yet, Tibi is fully aware that the Shoah cannot be compared to anything else, not even to the Israeli occupation of the territories. The Shoah, the Holocaust suffered by the Jews, is something entirely different.

A complex debate is underway in Israel on how to understand the Holocaust, its place in the country’s day-to-day life and the ways to commemorate it. Some people argue that the Holocaust must not be compared to anything else. One must never use the term “Shoah” for any other purpose. The term is reserved for a single event in which one people tried to eradicate another people in a methodical and monstrous way in the name of some fascist racial doctrine, and in which they almost succeeded. Those who contend that the Holocaust was a unique event and that the term should not be used for commonplace needs oppose the comparison of Iran’s quest for nuclear weapons with Adolf Hitler, for example. They answer irately whenever Prime  Minister Benjamin Netanyahu talks about the need to prevent a “second Shoah,” saying: “How can he compare the millions of helpless Jews in Europe who were led to their death in the middle of the last century, while the Allies and the West turned their backs on them and refused to even bomb the death camps, with the situation today, when Israel is a regional power with the strongest, best-trained and best-equipped army in the Middle East, and when foreign publications contend that it has the nuclear capabilities of a superpower? If we keep repeating this mantra of a ‘second Holocaust’ too often,” they continue, “it could become a self-fulfilling prophecy. Modern Israel is a strong, self-confident country, which can defend itself. The Holocaust? That’s something entirely different.”

There are also those with an opposing view, led by Netanyahu. This group believes that the near daily use of the Holocaust and the lessons to be learned from it are the ultimate mitzvah and an act of near-religious significance. It is already part of Netanyahu’s undeviating mantra, and not just during the annual Holocaust Remembrance Day events either. Nor is [Prime Minister Benjamin Netanyahu] Bibi alone in this either. Author A. B. Yehoshua, one of the most unmistakable symbols of the Israeli left and opposition to Netanyahu, agrees with him completely on this. When a country like Iran strives to obtain nuclear weapons and its leaders make incessant threats by publicly stating their intention to wipe Israel off the map, Yehoshua says that it must be taken seriously. He contends that Israel’s current military prowess is irrelevant to the possibility that the country could really be wiped off the map using nuclear weapons, so the feasibility of there being a second Holocaust is taking shape right before our eyes. Why should we sit silently and wait? Why should we allow it to happen again? Once you’ve been burnt with boiling water, you take precautions, even with cold water, don’t you?

Unlike Netanyahu, Yehoshua thinks that the most effective way to neutralize the Iranian threat is by resolving the conflict with the Palestinians and pouring cold water on the violent impulses of the region. That is where he parts ways with Netanyahu. On the other hand, he agrees with Bibi in his assessment that the Iranian threat bears the potential for a second Shoah. Nor is he the only one to agr ee with Bibi on that.

Regardless of the position people take, the threat of a Holocaust hovers over the thought s and minds of Israelis today, just like it did over half a century ago. There is no shopping or entertainment on Holocaust Memorial Day in Israel. The TV schedule is pre-empted for special programming. Grandfathers and grandmothers, children, grandchildren and great-grandchildren huddle together during the memorial ceremonies, listen to the few remaining survivors and then spend the night watching documentary films, which continue every year to bring the horrors of this event into every home in Israel, in shades of black and white. Israelis are born into this trauma. They live it, breathe it and are committed to the fact that they are the only nation in history that had a well-oiled and efficient extermination machine used against it, and that they are the only people who were delivered en masse to an enormous slaughterhouse, not because it lost a war, not because it committed some crime, but just because. Because they existed.

Given this state of affairs, one can certainly fathom the distrust that Israelis have in their surroundings. Their fear of a second attempt to exterminate them is certainly understandable, as is the term “Auschwitz borders,” coined by legendary Foreign Minister Abba Eban [1966–1974] in reference to a return to the 1967 borders. A nation which experienced that less than a hundred years ago will have a hard time shutting themselves up in a country that is just nine miles wide, especially given the fact that there are hundreds of millions of Muslims stirring behind those borders, and that some of those Muslims refer to the Jews as “the descendants of apes and pigs,” call openly for jihad and refuse to come to terms with the existence of a Jewish entity in the historic land of Israel.

So, anyone who intends to roll up his sleeves and dip his hands into this powder keg should know everything about the eternal flame burning beneath it. This is true not only of all the people who attempt to mediate the conflict, but also, and especially, of our adversaries and partners in this conflict, such as the Palestinians. If Palestinians were more intimately familiar with the horrors of the Shoah and the scar it left on the Israeli soul at large, and if Israelis were to learn about the Palestinian Nakba (“Disaster”) of 1948 from an unbiased perspective, it is quite possible that the mutual distrust, the primal fear that each side has of the other and their perpetual entrenchment behind impossible positions would be fractured. What we have here is a modern retelling of the story of David and Goliath, with both sides claiming that they are David and seeing the other side as Goliath. We will not know tranquility until that is resolved.

by Haitham EL-TABEI with AFP correspondents in the Middle East | AFP | May 17, 2022
END_OF_DOCUMENT_TOKEN_TO_BE_REPLACED