Young Israelis prefer the alternative Holocaust ceremony over the state one, where suffering is not reclaimed by Jews only and the trauma is a basis on which to rebuild the society. 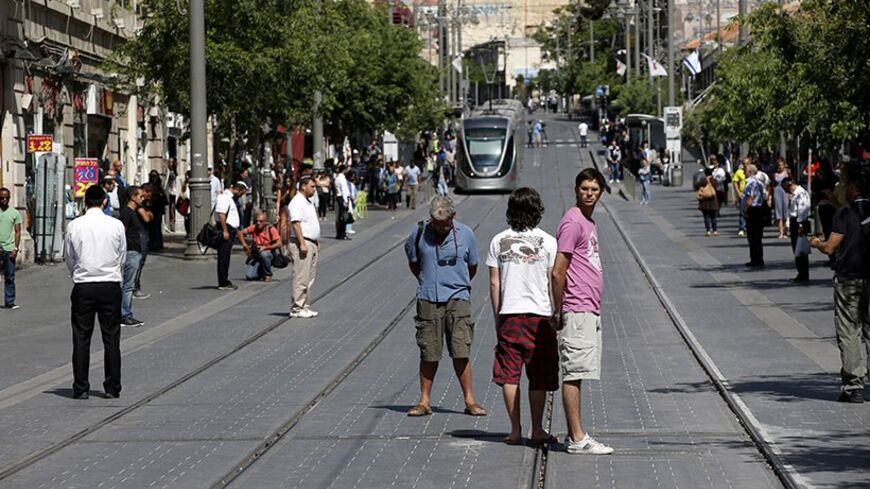 Two years ago, in 2012, professor Moshe Zimmermann, a historian at Hebrew University, was invited to speak at a ceremony marking Holocaust Remembrance Day. Zimmermann was surprised by the invitation. For years he has been keeping away from official ceremonies, and on more than one occasion had criticized what he described in the media as the commemoration ritual of the Holocaust. As a scholar of German history, whose family immigrated to Israel from Hamburg, he considers himself competent to talk about the Holocaust, and especially about the ways to immortalize its memory.

The organizer, Avi Gibson, explained that the event in question was an alternative Holocaust Remembrance ceremony and had nothing to do with the official ceremony at Yad Vashem Holocaust Museum. Zimmermann accepted the invitation. “I was glad to hear that there are other events that view the lessons of the Holocaust in a different light,” Zimmermann told Al-Monitor, “and that’s why I agreed to take part.”

Gibson and Shahara Blau came up with the idea and initiated the alternative Holocaust Remembrance Day ceremony in 1999. They had had enough of the official ceremonies, of the sense of endless victimhood and feelings of revenge emoted by the official speakers.

The two, in their 30s, decided to take action. They ran a small ad in Tel Aviv, calling on people to take part in the event. They were so skeptical that they expected only a few dozen people would show up. To their amazement, many hundreds arrived. The Tmuna hall on the city’s Shonzino Street was filled to capacity, and many were turned away.

At this week’s event on April 27, on the eve of Holocaust Remembrance Day, many also found themselves crowding the hallways and stairs. Two hours before the start of the ceremony, the 300-seat hall was already overflowing. The audience was clearly young and obviously expecting to hear another version, different than the permanent, official narrative.

“When we started in 1999, there was a different atmosphere in Israel,” recalled Blau, the daughter of Holocaust survivors. “The whole Holocaust discourse was completely different. The television programs were hijacked by broadcasts about the Holocaust. The whole discourse focused on the past. We wanted to deal with the Holocaust experience from a current-day perspective, and not just from the point of view of the past.”

Zimmermann emerged from the event with a sense that he had been present at a ceremony that was likely to be relevant for many who had lost interest in the existing Holocaust discourse. “It was a positive experience,” he recalled this week, “because the ceremony sought a different narrative than the existing one. Instead of presenting the Jews as victims of the Holocaust, namely of what was done to me, I and the others also talked about what we as Israelis are doing that is not compatible with the memory of the Holocaust. I spoke of the Holocaust as a universal responsibility, I spoke of the suffering of man, I spoke about how to prevent the suffering of others, I spoke about the fact that Jews don’t have a monopoly on pain and sorrow and that there are other nations that have also undergone terrible tragedies.”

Shai Golden has also turned into an advocate of the alternative Holocaust commemoration. In the past Golden was the editor of Haaretz magazine and today he holds a senior position at Israeli Channel 2 Television. When he was invited to speak, he was quick to accept.

“I felt the memory of the Holocaust must be taken out of the hands of the state,” he told Al-Monitor. “I’m aware of the fact that the government conducts its own ceremonies, but unfortunately they are not relevant to the young generation. I asked myself how I convey the Holocaust to my children, and I came to the conclusion that the official ceremonies only push them away instead of bringing them closer.”

The official ceremony was conspicuous in its gloomy, somber ambience. Thousands of elderly survivors filled the Yad Vashem square while the country's leaders were seated in the first row, on the background of monuments commemorating the tragedy of millions of Jews.

At the ceremony, the prime minister and president both took part and gave a topical slant to Remembrance Day. While President Shimon Peres said that the Holocaust mandates Israel to seek all possible routes to peace, the prime minister again compared new enemies to old ones. “I hope that the lessons of the past have been learned,” he said. “Iran and its satellites, Hezbollah and Hamas, call and act openly for the destruction of the Jewish state. … Iran is militarizing with its nuclear weapons for this purpose. … It must be stopped.”

Meanwhile, hundreds of young people attended the alternative ceremony; most were casually dressed in jeans and T-shirts. Among them were showbiz people, journalists and also a dancer (Renana Raz) who introduced herself as a third-generation Holocaust survivor. The speakers emphasized that they do not identify with the national "tone" regarding the Holocaust but, instead, view the tragedy as a very personal experience. Almost all of them rejected the connection to Iran and other enemies, and some even felt insulted by the comparison drawn by the prime minister between Nazi Germany and Iran.

Hundreds of participants sat in complete silence in the hall and listened to the young speakers. The speakers went up and down from the podium in a silence that hovered over the crowded hall. There was no heckling, no interruptions or disturbances. Each speaker came with his or her own story. There was no clapping. At the end of the event that lasted more than two hours, the audience departed to Tel Aviv for Remembrance Day evening.

The success of the Shonzino Street ceremony has bred additional alternative ceremonies, mostly in Tel Aviv. What bothered Zimmermann and Golden also bothers a broad segment of the Israeli public, which is not so enthusiastic about the militant and vengeful tone of the prime minister and other politicians. This year, too, on the eve of Holocaust Remembrance Day, Prime Minister Benjamin Netanyahu, delivering the keynote address at Yad Vashem, mentioned the threat from Iran and compared it to the Nazi danger. “But they had eyes and could not see, they had ears but could not hear,” he warned.

Truth be told, it wasn’t always this way. In the first years of the state, first Israeli Prime Minister David Ben-Gurion refused to take part in the Holocaust Remembrance Day ceremony held at Kibbutz Lohamei Hageta’ot (named after the Ghetto Fighters). “How much can one keep rubbing the wounds of the past?” he said in justifying his refusal. Many of his friends among the leadership of the Mapai Party [forerunner to today’s Labor Party] also declined to take part in ceremonies held in those years.

One can say with certainty that the Israeli public was made fully aware of the Holocaust by the 1961 trial of Adolf Eichmann. The trial exposed the Holocaust terrors in a powerful and unprecedented fashion and brought them into every Israeli home. During the trial, hundreds of thousands of Israelis were riveted, listening to their radios at home and to their transistor radios elsewhere to follow the testimony of the survivors. Until then, many Israelis had chosen to ignore the hundreds of thousands of survivors who immigrated to Israel, and even turned their backs on them, claiming they represented the non-Israeli Jews of the Diaspora.

Until the 1970s, Israelis conducted modest ceremonies that started on the eve of Holocaust Remembrance Day and ended 24 hours later. The ceremony at Yad Vashem was clearly modest and the television broadcasts stressed the centrality of the day with a minor tone. Nowadays, all the government ministers take part in ceremonies, central among them the ceremony held at the Knesset, during which they read out loud the names of their own family members who perished in the Holocaust.

Zimmermann believes that the rise of late Prime Minister Menachem Begin to power in 1977 was what contributed to the sweeping change in the nature of Holocaust Remembrance Day. From a day of modest ceremonies it became the be all and end all for days before and days after.

“All of a sudden, the Holocaust is only ours, and no one else’s,” he explained. “Begin spoke only of the tragedy of the Jews, completely ignoring the fate of other nations. Since then, that tone has become more strident. Benjamin Netanyahu brought the indoctrination of this concept to a peak, and caused us to find justification for every bad deed we commit.”

Gibson, one of the initiators of the alternative Holocaust Day, believes that he and his friends are planting a new seed as far as the Holocaust discourse goes. “At these encounters we don’t talk about Berlin of 1945,” he explained, “we try to reopen the trauma so that we can go on to the stage of healing. A society that has undergone a trauma must process it and emerge at a different point.”