A new study shows that 22.5% of Israeli Jews consider the political left to be "dangerous." 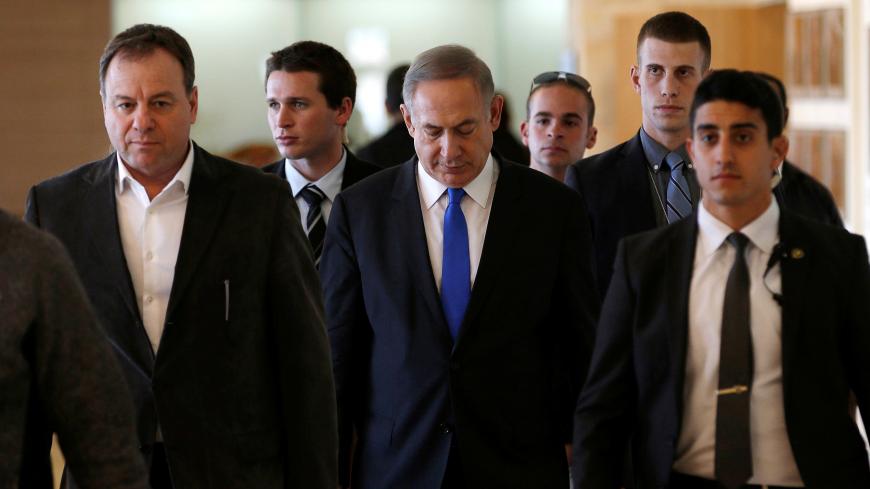 One of the Likud Party's more provocative campaign ads from the 2015 elections features armed Islamic State militants driving a small pickup truck in Israel. The militants stop to ask a kind Israeli driver how to get to Jerusalem. He answers, "Go left." The message was clear. The left will be weak against terrorism, letting IS into the country. Prime Minister Benjamin Netanyahu personally led the campaign, approving every ad and statement and maximizing use of its theme: the danger posed by the left. Netanyahu wasn't the only politician to make use of that motif, but he was undoubtedly the most sophisticated.

A new study — "Stop Dismantling, Start Putting Together," presented April 3 by the leaders of Pnima (Inside, in Hebrew) to mark the launch of their new movement — suggests that the right's campaign to delegitimize the left has been effective. Pnima's leaders include former Israel Defense Forces Chiefs of Staff Benny Gantz and Gabi Ashkenazi and former Education Minister Shai Piron. They go to great lengths to talk about the risks posed by the growing rifts in Israeli society, chief among them the one between right and left, but one astonishing statistic cuts through their high-minded language: 22.5% of Jews in Israel believe that the left is dangerous. The very idea has far-reaching implications.

It is hard not to assume that this can be attributed, at least in part, to the right's campaign to delegitimize the left. Indeed, in 2017, being identified with the left is considered problematic image-wise to the point that Yesh Atid Chairman Yair Lapid, a large part of whose followers hold moderate, left-leaning positions, carefully distances himself from any link to the left. The question is whether the left itself and its leadership are in some way responsible for their problematic image and the distancing of large segments of the population from the camp, which once had a grip on power. The day Pnima was founded — with the purpose of healing rifts and moderating today's spiteful dialogue — should be an opportunity for the left to boldly look inward and determine whether it also bears part of the blame.

Despite conventional wisdom, the division between right and left is not based solely on diplomatic issues or whether to support or oppose the establishment of a Palestinian state. Quite a few polls conducted over the last few years indicate that even among moderate right voters, there is a majority that supports the creation of a Palestinian state as part of an agreement that leads to peace. Furthermore, even their leader, Prime Minister Benjamin Netanyahu, came out publicly in support of a Palestinian state in his 2009 Bar Ilan speech, and later repeated the same message. Even if Netanyahu is not doing anything to advance this objective, that he made such a statement proves that a Palestinian state is something that Likud voters could live with, if it leads to peace with the Palestinians. That is why the leaders of the left must search elsewhere for answers to why its image has suffered so much.

The 2015 election was one of the biggest moments of crisis in the history of the Israeli left. It proved beyond a shadow of a doubt that there is a structural failure in its connection with the periphery, development towns and even major cities. The Zionist Camp collapsed in the periphery, while the Likud won in eight of the 10 biggest cities. It was a breaking point, especially since the pundits and polls predicted that the Zionist Camp would win.

The anger and frustration on the left in the days immediately after its defeat resulted in the internet campaign "Don't Give (Charity to the Poor)." The campaign called for a halt to showing solidarity with the needy sectors and donating to them on the assumption that most of Netanyahu’s voters belong to the weak sectors. It was because of this same feeling that actor Moshe Ivgi, who was part of the Zionist Camp's campaign, used an interview with Channel 10 to describe Likud voters as undecided and confused. "People who voted for the Likud, or at least the large majority of them, are the same people who were screwed by the party during its past three terms in office. The diplomatic situation, the social situation, the economic situation: They have all deteriorated."

These two examples hold the answer to how the left has distanced itself from wide swathes of the population, including Likud supporters who might otherwise vote for them. They have a boorish attitude and stigmatize Likud supporters as a whole. In fact, it seems that the left-wing has not developed a serious profile of Likud voters. Most Likud voters, and certainly most of the party members, contrary to assumptions, are not poor. They are actually part of the middle class. Statistics from the last few years show that the poorest sectors in Israel are the Arabs and the ultra-Orthodox, both of whom vote for sectorial parties.

Anyone who lives the Likud movement and is familiar with the profile of its voters knows that for the most part, they are not poor people. It might make sense to assume that about ultra-Orthodox Mizrahi Shas Party voters, many of whom, in the distant past, were Likud voters, and are now trapped in an endless cycle of poverty, but it makes no sense saying it about Likud voters today.

Likud leader Menachem Begin won the 1977 elections, beating Labor, the party that had ruled Israel since its foundation. This political feat earned the new prime minister the moniker "Begin, King of Israel" among Likud supporters. An anecdote underscores the social change in the Likud since those days: In the early 1990s, Likud Justice Minister Dan Meridor attended the circumcision of the son of a party supporter. Meridor stared in shock at a rabbi dressed in a traditional robe, surrounded by a circle of admirers. "Who is that?" Meridor asked. "He's the new Begin," he was told. The rabbi in the robe was the leader of Shas, Rabbi Ovadia Yose, who won 17 seats in the 1999 election. A large part of those seats were won at the expense of the Likud.

That is why anyone searching for reasons for the huge rift between right and left will discover that it is not only about disagreements over the diplomatic process, where Likud voters often hold more in common with the left than what divides them. It is also not only about the delegitimization of the "dangerous left." It is also about the patronizing way the left imagines Likud voters, neglecting to update their profile.