Why did over 1,600 Iranians sign up to run for president?

Over 1,600 Iranians showed up at the Interior Ministry to register to run in the May 19 presidential election, fully aware that the Guardian Council will block their running. 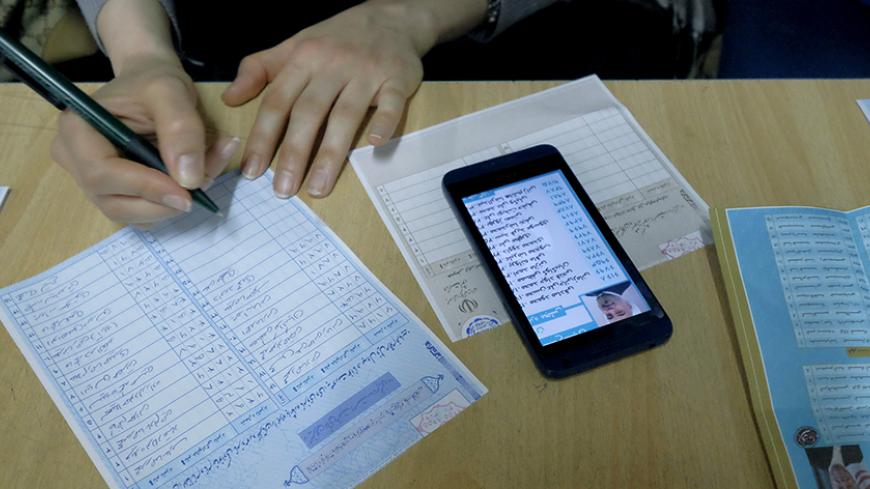 An Iranian woman fills in her ballot during elections for the parliament and a leadership body called the Assembly of Experts, which has the power to appoint and dismiss the supreme leader, Tehran, Feb. 26, 2016. - REUTERS/Raheb Homavandi

Over 1,600 Iranians showed up at the Interior Ministry April 11-15 to sign up to run in the May 19 presidential election. The majority were ordinary people, including some odd characters who — despite lacking political backgrounds or qualifications — registered their names enthusiastically. Some even traveled long distances to Tehran from their towns and villages, including a 92-year-old man and a shepherd.

But what are the motives behind these peculiar candidate registrations? Even if approved, would these individuals have been able to win the public’s vote? The most likely answer is no. Based on Article 115 of the Iranian Constitution, the president must be elected from among religious and political figures possessing the following qualifications: Iranian origin, Iranian nationality, administrative capacity and resourcefulness, a good past record, trustworthiness, piety and convinced belief in the fundamental principles of the Islamic Republic of Iran and the official religion of the country.

Based on these criteria, anyone with an Iranian birth certificate can essentially show up at the Interior Ministry to register to run. However, the decision on whether they will be allowed to compete in the race lies with the Guardian Council, a body made up of six experts in Islamic law selected by Iran’s supreme leader and six jurists elected by parliament from among a list of jurists nominated by the head of the judiciary. As such, it is evident that the ordinary Iranians who show up to register will not be allowed to compete. Yet more and more are seen entering the Interior Ministry every four years, each with their own personal agenda.

Statistics on those registering to run for the presidency this year was announced by the head of Iran’s Elections Headquarters, Ali Asghar Ahmadi, on April 15, hours after the registration period came to an end: “A total of 1,636 candidates filed [to run] for the election — 137 of them are women. The youngest person to register is 18 years old, and the oldest is 92. In the previous … presidential election, 686 candidates signed up for the vote.”

According to Ahmadi, 226 of the registered individuals are below the age of 30, and 430 of them hold a bachelor’s degree. In 2001, when former Reformist President Mohammad Khatami was re-elected, the Guardian Council approved 10 candidates — one of the highest figures ever. Iran’s first presidential election following the 1979 Islamic Revolution was another exception, with 96 candidates cleared to run in the 1980 presidential poll.

The presence of Iranians from all walks of life in front of the election headquarters waiting to register also caught the interest of media outlets. Every day, prominent news agencies all published images of the odd and interesting characters who came to register under a section called “The sidelines of registration day.” Given the increasing use and influence of social media networks, videos and images of these odd characters also began circulating on cellphones of Iranian citizens, thus creating a source of humor.

But the question is, why do these ordinary Iranians register to run for a position they know they are probably not qualified for and that the Guardian Council will never approve?

Layla Ashouri, a sociologist and professor in Tehran, told Al-Monitor, “The main reason is the excessive desire to be seen by society. Given the expansion of social media networks, ordinary citizens feel they have a good potential to showcase themselves and get attention in the wider world. If they are lucky, the video of their registration could circulate on the cellphones of millions of Iranians. For people who have problems related to their personality, this is seen as a success.”

However, the jokes sparked by these odd registrations have prompted political figures to criticize the current registration situation and request a law to limit the number of applicants. In an April 14 Instagram post, Secretary of Iran’s Expediency Council Mohsen Rezaei wrote, “It is scorning both the Iranian people and the country’s democracy that on the first day of the registration process, there comes an applicant claiming to be God; on the second day, another one calls himself a prophet. Someone brings his child to sign up for the competition, and foreign and domestic media publish photos and reports of these psychopaths as applicants to contest Iran’s presidential election.”

Meanwhile, Grand Ayatollah Naser Makarem Shirazi, a prominent cleric in the holy city of Qom, released a statement on his website April 14 criticizing the situation. Shirazi wrote, “We have heard of many people from different regions complaining and expressing worry about the current unorganized state of the [candidate] registrations for the presidential election. They believe that some individuals, both consciously and unconsciously, who are trying to mock the presidential election and cause harm to the establishment, have come to register and even lined up without having the required criteria. … We need a solution as soon as possible so that [only] those who at least have the minimum requirements for the post can register. [I] wish measures had been taken in previous years to solve this problem and am surprised as to why the leaders of this country have not [already] done anything to solve this.”

On April 18, judiciary chief Sadegh Amoli Larijani also expressed his annoyance at the large crowds registering for the presidency, saying, “Parliament and the Guardian Council can devise ways in accordance with the constitution to narrow down the range of people who can register and establish a set of minimum requirements for the candidates so that not just anyone can register. This kind of registration is an insult."

These criticisms are made every time an election approaches in Iran, especially as reports of odd characters registering as candidates begin to spread. However, as always, they are quickly forgotten.