Why some Reformists may not support Rouhani's re-election

While Iran's Reformists announced they are supporting President Hassan Rouhani in the election, some activists are asking for transparency in the decision-making process. 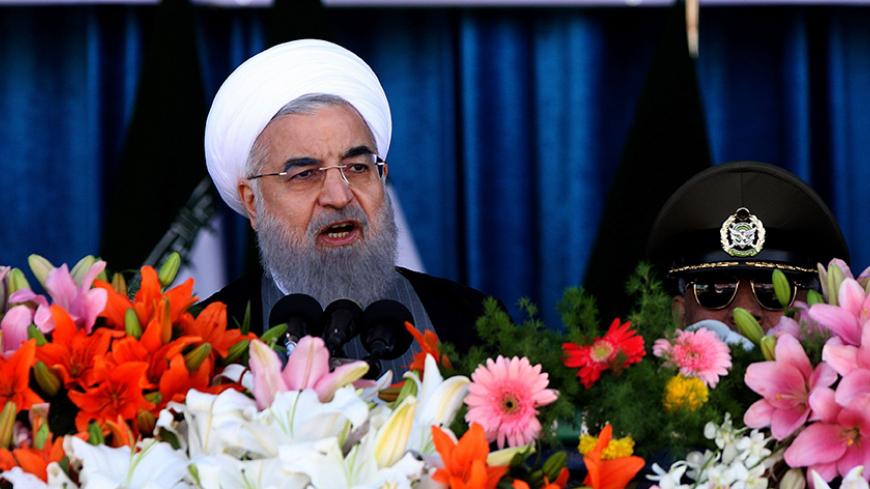 Iranian President Hassan Rouhani delivers a speech during a parade on the occasion of the country's Army Day, Tehran, April 18, 2017. - ATTA KENARE/AFP/Getty Images

Iran's Reformist Council for Policymaking announced March 12 that it would be supporting incumbent moderate President Hassan Rouhani — approximately two months before the country's presidential election. Mohammad Reza Aref, a parliamentarian and the head of the council, said that in a meeting in which all of the members were present, they took a vote and agreed to support Rouhani for his second term.

At the time, the story was not widely covered — supporting an incumbent candidate is not necessarily breaking news. And Reformists have essentially acquiesced to the power of the hard-line Guardian Council and no longer run their most popular and well-known names. So, throwing their support behind Rouhani once again was not a difficult choice, especially given the alternatives. Journalist and Reformist activist Mohammad Javad Hassar said to BBC Persian that despite their criticisms of the Rouhani administration, they will support him "to prevent a tragedy in the name of Ahmadinejad." He clarified that he meant the mentality that former President Mahmoud Ahmadinejad brought to office.

An open letter published April 19 by Reformists addressed to the Reformist Council for Policymaking, however, citing the simultaneous city council elections that will take place during the presidential election, asked for greater transparency in the selection of candidates. The letter, which so far has been signed online by 1,200 different people of various backgrounds, criticized the logic of choosing between "bad and worse" and said that this logic would ultimately cost the voters who are inclined to vote for Reformist policies.

The letter above followed another letter April 17 by nine well-known Reformists, who addressed directly the head of the Reformist Council for Policymaking. The letter asked the council to prevent the candidacies of individuals running as Reformists but who have a history of turning their back on Reformist policies. The letter referenced the case in 2013 in which Tehran city council member Elahe Rastghoo ran as a Reformist but cast the deciding vote in favor of the conservative candidate for mayor. The vote was a shock for Reformists and moderates who had a chance for the mayor's office for the first time in eight years. The more notable names who signed the letter were Mostafa Tajzadeh, Saeed Hajjarian and Mohammad Reza Khatami.

What the two letters had in common was their concern that voters who support Reformist policies would eventually become discouraged with the lack of transparency or the selection of untrustworthy candidates. Given the wave of anti-elitism sweeping even Western countries, it makes sense for Reformists to grow concerned that their decision-makers are becoming complacent or are playing favorites in their selection of candidates.

Taking the Reformist vote for granted can open the door for insurgent conservatives who have formed under the Popular Front of Islamic Revolution Forces. In their second round of voting in April, the group listed five candidates to support for the election, with Tehran Mayor Mohammad Bagher Ghalibaf being the most well-known name. In his first interview since registering for the presidential election, Ghalibaf said that even Rouhani's supporters are throwing their support behind a candidate they know will not be able to address the country's problems.