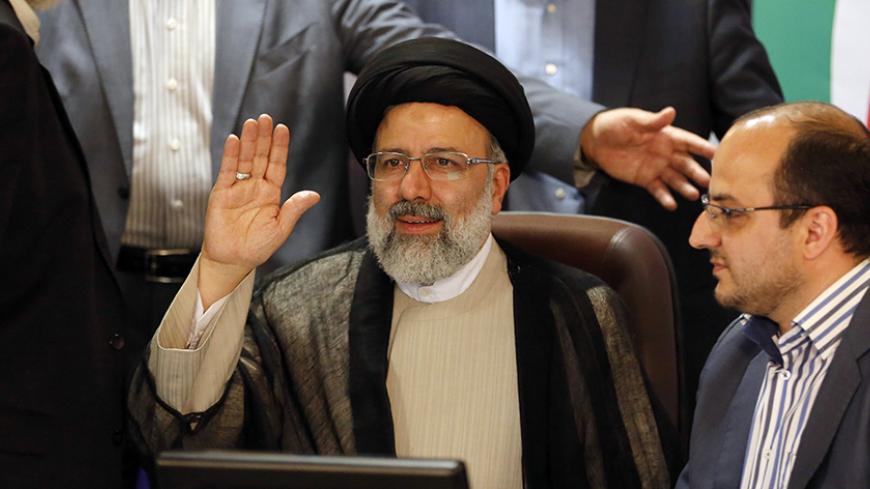 Iranian cleric and head of the Imam Reza charitable foundation Ebrahim Raisi gestures while registering his candidacy for the upcoming presidential elections at the Ministry of Interior in Tehran, April 14, 2017. - ATTA KENARE/AFP/Getty Images

In the first televised interview of the six Iranian candidates approved to run in the presidential election, Ebrahim Raisi, the custodian of Iran’s largest religious endowment, described a dark economic condition in Iran and said he would be able to fix it.

“In my own life I’ve tasted poverty,” Raisi began when asked what his plans are for the poor. “And since I became the custodian of the Astan-e Quds Razavi, I’ve encountered men and women who are dealing with numerous difficulties.” In March 2016, Supreme Leader Ayatollah Ali Khamenei appointed Raisi as custodian of the shrine of Imam Reza, the holiest (and wealthiest) site in Iran for Shiite Muslims. Since his appointment, he began taking trips to poor villages outside the northeastern city of Mashhad, where the shrine is located.

Raisi recounted “a man who came with tears in his eyes and talked of his poverty” and a “woman with four children who asked at least one of them to be given jobs.” He said that the many villages he visits are simply depending on their cash subsidy payments as their sole source of income and that this wasn’t sustainable.

Raisi also criticized the high level of unemployment in the country. He said that if one looks at the official numbers, it is stated at just over 12%, but the unemployment rate for those with college degrees is as high as 40% and near 30% for the youth. He blamed the unemployment rate for other problems in society such as divorce and corruption. Raisi questioned how it can be that a country with such status and with a voice on the world stage and such scientific progress is still unable to solve the issue of unemployment.

Raisi, however, was not very specific on how he would address poverty other than suggesting doubling or even tripling the cash subsidies to the lowest income brackets in Iran. The policy would essentially undo one of President Hassan Rouhani’s key domestic achievements in lowering the inflation rate from 40% to near 10%. Raisi also suggested restarting the Maskan-e Mehr low-income housing project, which was also blamed for high inflation. Raisi argued instead that it would both create jobs and offer affordable housing.

Raisi said one of his first acts as president would be to structure government institutions and banks so that they are incorruptible. In an indirect criticism of the Rouhani administration, he said that if there is corruption, it should be the president and his ministers who first uncover it and not other institutions.

In other news, 10 Iranian border guards were killed in a terrorist attack on the Iran-Pakistan border. The terrorist group Jaish al-Adl took credit for the attack. Iran’s Sistan-Baluchistan province has periodically witnessed violence at the hands of Sunni extremist groups. The province is one of the less-developed regions of Iran and its borders are porous. The last time there was a major attack by the group was in October 2013.