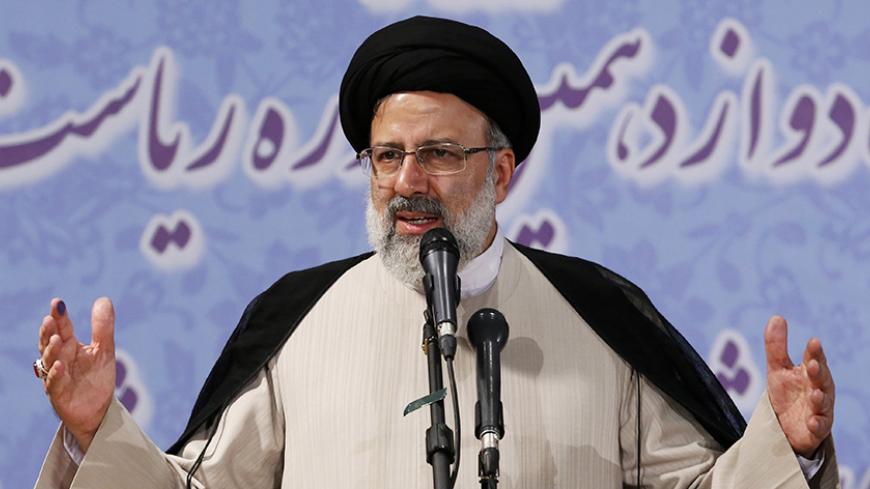 When Ebrahim Raisi, the custodian of Iran’s largest religious endowment, announced his entrance into the 2017 presidential election, he stressed that he would run as an independent for all Iranians and “apart from the current political groupings.” Even before the announcement, Raisi had gone to great lengths to not get involved in partisan bickering and avoided directly attacking incumbent President Hassan Rouhani by name. However, not only can Raisi’s credentials as a conservative candidate not be denied, there are growing signs that Raisi’s presidency would in policy resemble that of former President Mahmoud Ahmadinejad’s divisive eight years.

In one of his first moves since being one of the six candidates approved to run, Raisi chose Ali Nikzad as his chief of staff. Nikzad served as minister of transportation and housing, minister of housing and urban development, and acting minister of information and communications technology under Ahmadinejad’s second term, a time when the president was bringing like-minded allies into his Cabinet while purging it of traditional conservatives.

In his latest public meeting on April 22, which was shared on his website, Raisi met with Saeed Jalili, former hard-line nuclear negotiator under Ahmadinejad. Raisi’s website shared a friendly picture of the two smiling and walking together. The following day Jalili told Tasnim News Agency that of the remaining candidates, Raisi was the best choice. Jalili has been one of the most vocal critics of Rouhani, especially with respect to the nuclear deal between Iran and the six world powers, which is the landmark achievement for Rouhani and Iranians who are seeking better relations with Western countries.

The meeting between Jalili and Raisi was not just a photo-op either. Mohammad Javad Abtahi, a conservative parliamentarian with the hard-line Endurance Front, told Entekhab website April 23 that the meeting took place for Jalili to share his views on foreign policy. Abtahi also said there is the possibility that Raisi would ask Jalili to join his Cabinet.

There were signs from the beginning that Raisi was seeking the help of Ahmadinejad-era officials in his campaign. When he registered his name April 14 at the Interior Ministry building, Raisi brought with him Masoud Mir Kazemi and Farhad Rahbar. Under Ahmadinejad, Mir Kazemi was minister of commerce and minister of oil; Farhad Rahbar was former head of the management and planning organization. Bringing along these individuals among the crowds of journalists and camera crews was clearly an intentional political message.

The choice of Rahbar in particular was startling given that he was appointed by the Ahmadinejad administration to head Tehran University for six years. His ability to keep the university, a former hotbed of political activity, under control during the post-2009 election protests earned the praise of conservatives such as Hojat al-Islam Ali Akbar Kalantari, head of the office of the supreme leader’s representative to the universities. Farhad was so unpopular among the more liberal-minded university students that when he was replaced by the Rouhani administration in February 2014, they passed out sweets.

Raisi has also expressed support for Ahmadinejad’s signature domestic policy. On April 23, Raisi’s Telegram channel shared a comment of Raisi's on the Maskan Mehr housing project: “Unfortunately, a national project which would have helped industry and the economy and could have created jobs was shut down.” In January, Iran’s parliament voted to put an end to the low-income housing project that was plagued by construction difficulties, poor planning and corruption. The Rouhani administration has blamed the housing project plan for Iran's 40% inflation rate.

The defense by Raisi of a populist program such as Maskan Mehr, despite its many obvious weaknesses, suggests that Raisi, much like Ahmadinejad, plans on using populist rhetoric as part of his campaign strategy. Where the two differ, however, is in their style. In interviews and speeches, Raisi is often soft-spoken and uncharismatic. Ahmadinejad, much like American President Donald Trump, is loud, brash and uses more informal language. Also like Trump, Ahmadinejad would threaten to divulge secrets of his political opponents. Raisi so far has shown no penchant for such dramatics. Rather, despite gathering around himself former Ahmadinejad officials and speaking approvingly of Ahmadinejad’s key domestic program, Raisi insists he would remain above the partisan attacks. With such a campaign staff forming, however, that will likely be a challenge.