Egypt wants to save its street children and bank on them as a future workforce to develop the society. 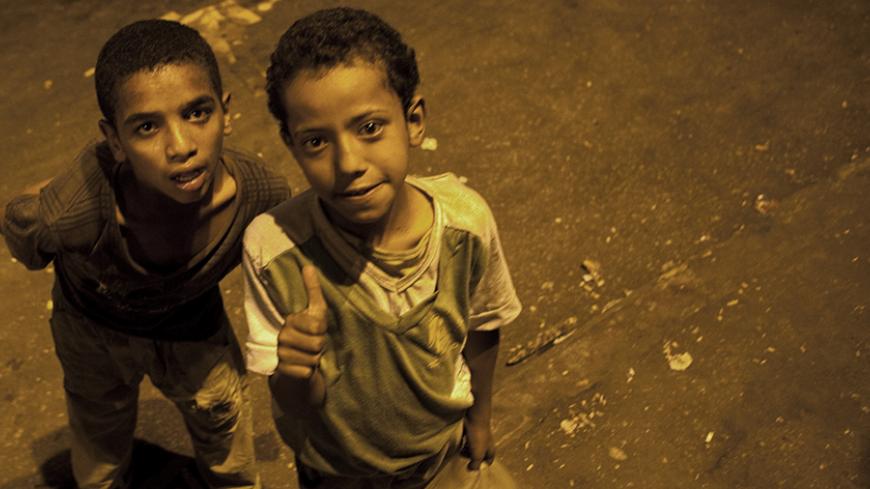 CAIRO — In an effort to address the worsening plight of Egypt’s street children, the Egyptian government launched the "Homeless Children" initiative on April 8 to accommodate 10,000 street children.

The government, represented by the Ministry of Social Solidarity, also announced that it is working on a program called “Takaful and Karama” ("Solidarity and Dignity"), which gives cash payments to families in order to help them take their runaway children back in.

The “Homeless Children” initiative is implemented by the Ministry of Social Solidarity in collaboration with the Tahya Misr Fund (Long Live Egypt). This initiative of 164 million Egyptian pounds (around $9 million) is set to distribute 17 mobile units in 10 governorates where the phenomenon of street children is most prevalent, such as Cairo, Giza and Alexandria.

Hazem al-Mallah, the initiative’s media officer at the Ministry of Social Solidarity, told Al-Monitor, “The mobile units are dispatched in the streets of the governorates to attract homeless children and provide them with emergency services such as food and health care. The units also aim to gain these children’s trust in order to refer them to the competent authorities, such as public care homes. The authorities will provide identity papers to these children and try to reunite them with their families or place them in care homes under the sponsorship of the Ministry of Social Solidarity.”

In 2015, independent experts, who report to the United Nations Human Rights Council in Geneva, said there are up to 150 million street children worldwide. In Egypt, the number of street children is not accurately determined. In 2001, a UNICEF report said the number of children living on the streets reached 2 million. However, the latest statistics, conducted by more than one governmental authority, including the Central Agency for Public Mobilization and Statistics and the National Council for Childhood and Motherhood, reported 16,019 street children in 27 governorates across Egypt in 2015.

In conjunction with the government initiative, members of the parliamentary Human Rights Committee are preparing a draft law for homeless children aimed at sheltering them, keeping them off the streets and making sure they get a vocational training to work in professions that could boost the Egyptian economy.

The head of the parliamentary Human Rights Committee, Alaa Abed, told Al-Monitor, "The new draft law aims to revive the idea of ​​Mohammed Ali Pasha — the ruler of Egypt from 1805 [to 1848] — who took in 300,000 street children and offered them vocational training. These children acquired great skills. Our goal is to create a generation of craftsmen and industrials in various fields.”

Pasha, who took over Egypt during the Ottoman rule in 1805, detained more than 300,000 homeless children, both girls and boys, in the streets of Egypt over the years and placed them in a camp in the Aswan Desert for three years where they were trained in various professions and trades. The children were also taught French and Arabic. They became skilled professionals in various trades; some worked as construction workers building bridges, roads and canals, while others were sent by Egypt to countries that lacked workers in their fields of specialization, such as carpentry and blacksmithing. Pasha also built ports for this workforce to help them export their produce.

There have been increasing calls by some in Egypt to bring street children into army camps and teach them trades and professions. This, however, has raised controversy as human rights activists in Egypt see this as tantamount to forced labor.

In March, parliamentarian Mona Mounir Rizk submitted a proposal to the parliament calling on the armed forces to determine the numbers of street children and recruit them in rehabilitation camps, which Zeinab Khair, the executive director of the Egyptian Association for Economic and Social Rights, told Al-Monitor was a frightening idea.

Khair said, “To deprive children of their childhood by detaining them for years in camps in the desert makes them monsters unable to integrate into society,” pointing out that the most appropriate measure would be to reunite them with their families.

Mohammed el-Komi, a parliamentarian and a member of the Human Rights Committee, told Al-Monitor, “The legislation being prepared by the committee relies on the experience of Mohammed Ali Pasha in terms of bringing these children together for learning and vocational training. The draft law, however, does not include detaining them in camps in the desert. Rather, the existing child care and governmental homes would be transformed into places that can accommodate them and teach them skills.”

He added, “I submitted to the parliament another draft law in March 2017 on the after-care for homeless children.” Komi explained that if passed, this draft law would bind the state to provide apartments and job opportunities for graduates of care homes to keep them away from drug addiction or terrorist networks.

In turn, Abed said, “A small committee of five members from among the Human Rights Committee was formed on March 20 to draft the new law and hold sessions to hear experts from among civil society and government.”

Mohammed al-Ghoul, who heads the small committee, told Al-Monitor that there are a number of proposed draft laws, some of which bind the state to allocate care homes in each governorate to offer psychological rehabilitation services for street children and to exploit youth centers to teach them various trades so as to get them ready for the labor market when they reach the working age.

Ghoul said that the draft law would address the issue of domestically abused children who fled their family homes. “We are preparing a text that allows the state — if ill-treatment is proven — to take away children from their families and put them in special care homes and to oblige the parents to pay the due expenses,” he said.

According to Abed, the draft law would oblige the state to provide these children with identity cards through specialized teams roaming the streets, as in most cases runaway children leave their parents without taking any identity papers. “We will not neglect the children fleeing care homes due to abuse, and we are considering the proper legal mechanisms to deal with them,” he said.

There are about 448 social welfare centers for children throughout Egypt, all under the control of the Ministry of Social Solidarity. However, numerous cases of physical and sexual abuse of children have been reported in these institutions, which are severely neglected.

Mallah noted that new care homes are being set up within the scope of the "Homeless Children" initiative, which is different from the existing orphanages and shelters for juveniles. He said that six homes have been established in Cairo for street children. “These homes include carpentry and blacksmithing workshops and training classes where children can learn different crafts,” he said.

To be efficient, the Egyptian government needs to offer homeless children with the most appropriate alternative, either by rehabilitating thousands of families to welcome back their young runaways or by reforming the system of social welfare homes that suffer from violations and abuses.