With paltry government support, the Stabl Antar Dream School is providing both a basic education and vocational training to the children of a shantytown in south Cairo. 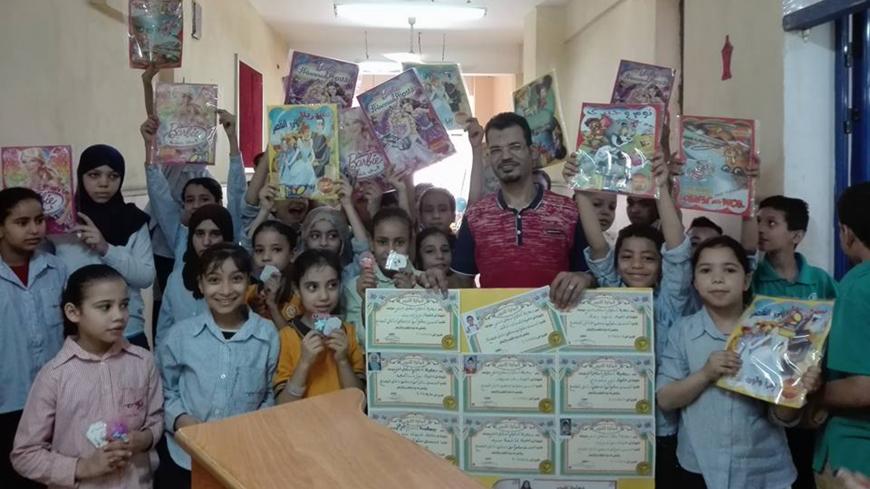 In the shantytown of Stabl Antar, south of Cairo, more than 1,000 poor families live in shaky, dilapidated wooden shelters on streets that are flooded from time to time with sewage. The hamlet, huddled at the base of a mountain, is also the home of Stabl Antar Dream School.

Amira Hamada, the school’s director, told Al-Monitor, “The school is the only one in the area and was created through the efforts of the Sohbat al-Khair charity association to address the large number of children dropping out. The closest school is 10 kilometers [6.2 miles] from the town.”

Hamada continued, “The ministry did not build any schools in the area and does not grant construction permits for schools, saying there are no funds for the teachers’ salaries and textbooks.”

Stabl Antar Dream opens its doors every weekday from 8 a.m. until 5 p.m. Divided into two classes, the students spend half of their day on either academics or vocational programs and then switch for the rest of the afternoon.

Hamada said the school serves from 75 to 100 students at a time. Their ages run from 6 to 19, as some of them started their studies late or are dropouts who returned to the appropriate class after assessment tests.

What started out as informal instruction and skill-sharing became a school in 2006, said Hamada. Secondary schools are not available in the area and Stabl Antar Dream lacks the funds and staff to open a high school. The Ministry of Education provided only five teachers, and the school hired nine instructors and six educational supervisors who are paid a pittance.

Magida Nasr, a member of parliament’s Education Committee, told Al-Monitor in a phone interview that there are two reasons for the lack of school funding in poor areas.

“The first reason is a lack of education allocations within the budget. These allocations are growing smaller each year. In fact, the education allocations for 2017-2018 were set at 130 billion Egyptian pounds [$7.3 billion], but the amount that was actually disbursed was only 80 billion Egyptian pounds [$4.5 billion]. Secondly, one ought to mention the complicated and slow government procedures. In 2017, 30,000 classrooms were supposed to be built throughout Egypt. However, we have already started the year 2018 and not one classroom has been built yet because of the rampant bureaucracy in the government’s institutions,” Nasr said.

According to Hamada, the school fees amount to between 900-1,000 Egyptian pounds ($50-$57), which include all the necessary books and materials as well as the uniforms, which are handmade by students themselves in the school’s workshops. Hamada added that the school also owns all the machines and equipment needed for the vocational training, including pottery wheels, sewing machines, molds and other materials funded by charities and businessmen.

Ahmad Hassan, who teaches ceramic art, told Al-Monitor, “The students made wonderful pieces and participated in different exhibitions, the latest being held in January, and were able to sell some of their products.”

Osti Mohammed is one the school’s graduates. Today, he is teaching carpet-making. “I was among the first students to enroll in the Stabl Antar Dream School. Everything I learned here has come in handy later in my life. Today, I am able to support myself and my family. I bought three carpet sewing machines and I work at the school as well,” Mohammed told Al-Monitor.

“We sell our products to a well-known factory, where we also buy new raw materials and tools,” he said.

The teachers also offer moral support to their students, who live in abject poverty in a town deprived of basic civil services. People are also bitten by snakes and scorpions or die in rock falls on rainy days, according to Shaymaa Mohammed, a member of the Sohbat al-Khair charity, which contributed to the building of the school.

Since 2008, the state has been threatening to evacuate the shantytown of Stabl Antar to the dismay of the townspeople, who cannot afford to move to better areas. In 2017, Mohammad Zayn Al-Abidin, the head of the Old Cairo district, issued an order to gather the families living on the edge of the mountain in Stabl Antar for their transfer to different areas for their own safety. Abidin added that the slum area includes about 1,000 families living in dire conditions and dangerously dilapidated houses. He confirmed that he had completed the paperwork for 100 families to be moved to Asmarat district. However, the people of Stabl Antar dug in their heels and refused to move, calling for the development of the area and for better services where they live.