Lawmakers don’t all share Trump’s fondness for the Egyptian strongman. 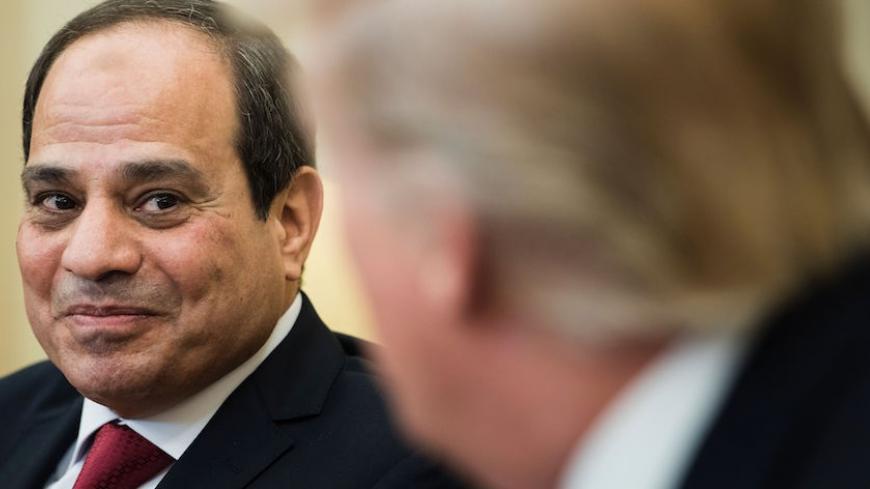 US President Donald Trump (R) listens while Egypt's President Abdel Fattah al-Sisi makes a statement to the press in the Oval Office before a meeting at the White House on April 3, 2017, in Washington. - GETTY/Brendan Smialowski

While Egyptian President Abdel Fattah al-Sisi received the red carpet treatment for his White House debut April 3, the mood was markedly cooler at the other end of Pennsylvania Avenue.

The top Democrat on the Senate Foreign Relations Committee, Sen. Ben Cardin, D-Md., introduced a bipartisan resolution along with four other members that takes the former military chief to task for his intolerance of dissent. The resolution notably puts Egypt on notice that US economic and military aid will remain tied to “progress on meaningful political reform, human rights and fundamental freedoms.”

“The United States should support Egypt as it addresses security threats and economic growth. However, genuine reform and the opening of space for peaceful political dissent and civil society activity is integral to Egypt’s stability and security,” Cardin said in a statement. “We can’t stay silent, in Egypt or elsewhere, when crackdowns on the media, civil society and political opponents take place.”

Simultaneously, Sen. Tim Kaine, D-Va., the top Democrat on the Senate Foreign Relations panel on the Middle East, wrote a letter to President Donald Trump asking him to raise the arrest of Egyptian-American Aya Hijazi with Sisi. Hijazi, the head of a nongovernmental organization (NGO) that took care of street children, has been imprisoned since May 2014 amid a crackdown on civil society.

“Egypt’s security, stability and economic recovery will be jeopardized without improvements in human rights, fundamental freedoms, and space for civil society,” Kaine wrote. “We are concerned that Egyptian authorities continue to use the facade of combatting terrorism to shut down NGOs, target media, and silence and imprison thousands of peaceful political activists.”

Six senators signed Kaine’s letter, including Republican Marco Rubio of Florida and Sen. Patrick Leahy, D-Vt., the top Democrat on the Senate panel that controls foreign aid spending. Leahy helped write current restrictions on aid to Egypt and may be able to count on support from his Republican counterpart, Sen. Lindsey Graham, R-S.C., a sharp critic of new restrictions on NGOs that the Egyptian parliament approved late last year.

“Closing crucial channels for peaceful expression and association — and the delivery of much-needed food and health services — will only exacerbate Egypt’s problems and threaten long-term stability,” Graham wrote in a Dec. 1 statement with Senate Armed Services Committee Chairman John McCain, R-Ariz. “Should President Sisi sign into law this draconian legislation, we will endeavor to strengthen democratic benchmarks and human rights conditions on US assistance for Egypt in fiscal years 2017 and 2018.”

The statements contrast sharply with the messaging from the Trump administration, which is seeking a reset with Sisi after President Barack Obama kept his distance following the 2013 military intervention against the democratically elected Mohammed Morsi.

“You have a great friend and ally in the US and me,” Trump told Sisi.

The Egyptian leader in turn assured his host of his “deep appreciation and admiration of your unique personality.”

Any potential discussion of unpleasant topics such as reports of widespread extrajudicial killings and political imprisonment would be raised in a "private, more discreet way," a senior Trump administration official assured reporters ahead of Sisi’s visit.

"We believe it's the most effective way to advance those issues to a favorable outcome," the official said.

Ironically, the congressional pushback is being reinforced by some of Sisi’s own putative allies. The nonprofit Coptic Solidarity in particular has been lobbying lawmakers and the State Department ahead of the president’s visit to continue tying foreign aid to progress on human rights.

“Mr. al-Sisi will likely present a whitewashed image of Egypt during his visit,” Coptic Solidarity said in a statement ahead of the president’s visit. “Yet he has overseen a large-scale crackdown on civil liberties. Copts and other religious minorities, the media and human rights advocates are experiencing oppression unseen even under the Mubarak dictatorship.”

The warning is especially notable from a group that shares Cairo’s goal of seeing the United States designate the Muslim Brotherhood a terrorist group because of its members’ inflammatory rhetoric. Many of Coptic Solidarity’s US members are first-generation immigrants who fled Egypt when President Anwar Sadat traded Saudi largesse for Wahhabi influence, said director of development and advocacy Lindsay Vessey, and they fear the same cycle repeating itself.

Vessey acknowledged that Sisi had made “positive overtures” to the Coptic community, such as visiting Christmas masses and calling for a “religious revolution” in a speech at Al-Azhar University. But she noted that violent attacks against Copts are on the rise along with blasphemy convictions and forced conversions of minors.

“The message that we want everyone to know is that we are for a strong, stable Egypt,” Vessey told Al-Monitor. “We’re against the persecutions and the discrimination.”