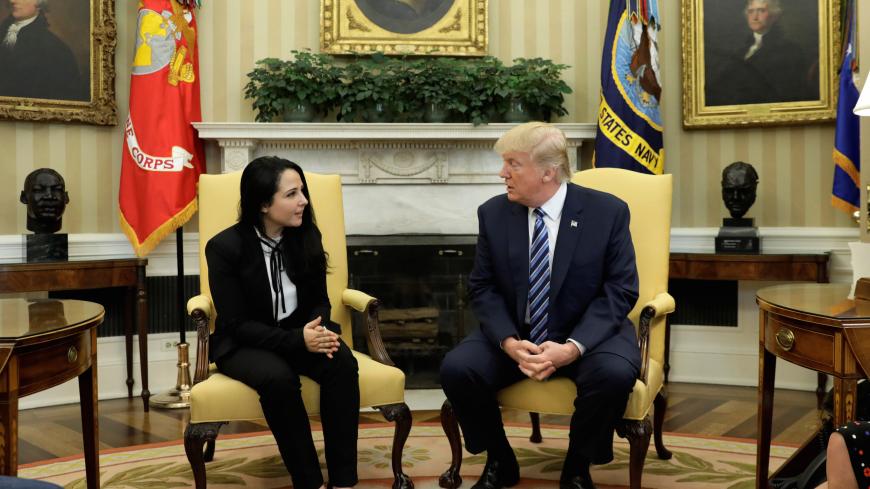 Aya Hijazi, an Egyptian-American woman detained in Egypt for nearly three years on human trafficking charges, meets with US President Donald Trump in the Oval Office of the White House in Washington, April 21, 2017. - REUTERS/Kevin Lamarque

President Donald Trump relished showing off his deal-making skills when he hosted Aya Hijazi at the White House last year after convincing Egyptian President Abdel Fattah al-Sisi to release the Egyptian-American NGO worker and her husband.

Now Hijazi and other Egyptian-American activists are hoping to use that bond to convince the US president to rethink his unstinting support for Cairo. To that end, they’ve launched a campaign to draw attention to the country’s dismal human rights situation on Capitol Hill and at the State Department ahead of this month’s presidential election.

“It seems like it was unclear to [Trump] that at least my case was a case of Sisi’s repression and I helped clarify that,” Hijazi told Al-Monitor this week during the two-day campaign, dubbed Egypt Advocacy Day. “I still wish that he can know that there’s more people who are like me who are unjustly in prison and deserve to be outside.”

“They are in the thousands now,” she added. “It is not about imprisonments anymore, it’s about extrajudicial killings and torture.”

Some 60 Egyptian-Americans descended on Capitol Hill on Monday and Tuesday to make their concerns heard. The effort was led by the Belady Organization, Hijazi’s NGO dedicated to helping street kids in Egypt, and the Freedom Initiative, a human rights organization led by Mohamed Soltan, another former Egyptian-American prisoner.

“These elections are being used in Egypt to make a mockery of democracy,” Soltan told Al-Monitor. “You have a rubber-stamp parliament. You have a president that is not willing to be opposed in a fair and free election. We wanted to show that engaging with democratic mechanisms here in a democracy can maybe bear some results and at least change the narrative on Egypt.”

Human Rights Watch and 13 other rights groups report that arrests and crackdowns on dissidents have intensified ahead of the elections, which they found lack “even the minimum requirements for free and fair elections.” Sisi’s sole challenger, after others were arrested or otherwise hindered, is Moussa Mostafa Moussa, the head of the pro-government El Ghad Party and a self-described “big supporter” of the Egyptian president.

Hijazi and Soltan are asking lawmakers to condition US assistance to Egypt to progress on human rights. They’re also pushing for a bipartisan resolution ahead of the election, which is slated to take place between March 26 and March 28.

Ironically, shortly after Sisi released Hijazi, the Trump administration ensured that Egypt would join three other countries exempted from its proposal to overhaul US military aid from grants to loans. Egypt receives $1.3 billion in foreign military financing every year, making it the second-largest recipient of US military aid after Israel.

Key lawmakers, however, are increasingly vexed with Egypt’s crackdown on human rights and dissent ahead of the election and are starting to push back. Sens. Marco Rubio, R-Fla., and Robert Menendez, D-N.J., led a group of 10 senators in a letter last week expressing their concern to Secretary of State Rex Tillerson.

“It is … vital that you continue to speak [publicly] and convey messages privately on the importance of credible elections so that not only the Egyptian government, but also the Egyptian people, understand that the United States stands for democratic governance and fundamental freedoms,” the senators wrote.

The senators said they support “efforts to seek out opportunities for increasing security cooperation to address Egypt’s legitimate security challenges and US support for Egypt’s economic recovery and growth.” But they argued that “absent progress on the political front, we fear that Egypt’s security and economic gains will not be sustainable in the medium to long term.”

Senate appropriators, meanwhile, voted in September to slash $300 million in military aid to Egypt while cutting economic aid by $37 million on account of Cairo’s implementation of an NGO law allegedly designed to crack down on independent civil society groups. The House, however, voted to maintain Egypt’s annual $1.3 billion military aid package while increasing economic aid to $150 million. It remains to be seen whether Senate or House appropriators will prevail when Congress finally passes its budget for fiscal year 2019.

Michele Dunne, the director of the Middle East program at the Carnegie Endowment for international Peace, told Al-Monitor that Egypt’s human rights situation is “not being spoken about on as high a level as it should be by US officials." Congress, she said, is “far, far more consistent about these things.”

She said it “is very often the US Congress that is forcing the US administration to pay attention to these issues, whether it’s demanding reports from the secretary of state or placing conditions on assistance.”

Indeed, the State Department decided in August to withhold $290 million in military and economic assistance over Cairo’s crackdown on Egyptian civil society after key Republican senators vociferously condemned Sisi’s ratification of the NGO law. Some analysts, however, speculate that the withheld aid may have had more to do with Egypt’s military relationship with North Korea.

Even as civil society advocates lobby Congress to force the Trump administration’s hand, another Egyptian delegation is descending on Washington this week to lobby lawmakers and administration officials for a free trade agreement. The American Chamber of Commerce in Egypt, which seeks to bolster bilateral business ties, contends that the uproar over human rights has unfairly overshadowed Egypt’s economic progress.

The chamber’s president, Tarek Tawfik, praised Sisi for his willingness to pursue fiscal reforms and austerity measures, touting a growth rate that has risen above 5% amid dropping rates of unemployment and inflation and shrinking budget deficits. Egypt cut subsidies for fuel and other commodities last year as part of a fiscal reform package to secure an International Monetary Fund loan.

“What is happening to Egypt when it comes to reforms in all aspects has been constantly advocated by the political circles here in Egypt for the last 30 years and I don’t think there was any hope that this would ever be realized,” Tawfik told Al-Monitor. “Now that it’s happening, I don’t think it’s getting enough credit and appreciation [although] it’s been high on the agenda of the policymakers here in the United States.”