Sen. Chris Murphy urged the Biden administration not to bypass US law with this year's military aid package to Cairo. 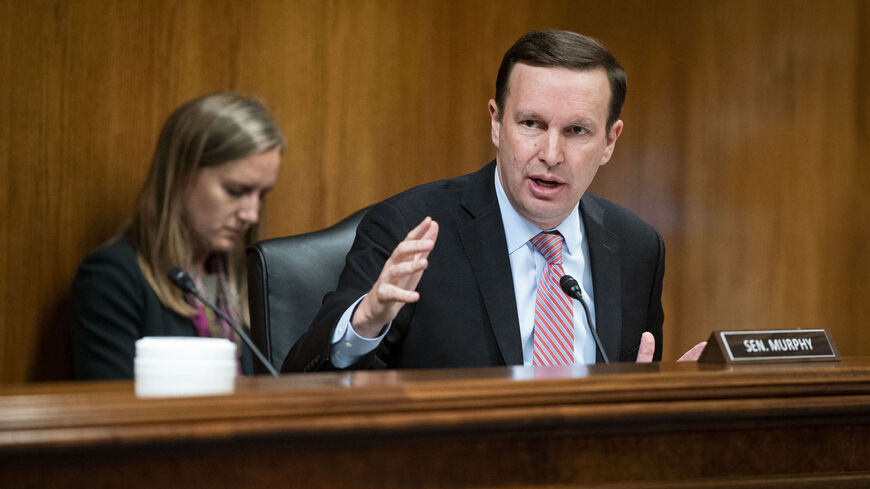 Sen. Chris Murphy, a Democrat from Connecticut, speaks during a Senate Appropriations subcommittee hearing in Washington, on June 9, 2021. - AL DRAGO/POOL/AFP via Getty Images

US Sen. Chris Murphy issued a blistering critique of the Egyptian government’s human rights abuses Wednesday, urging the Biden administration not to waive a congressionally mandated hold on a fraction of annual military aid to Cairo.

“Only China and Iran execute more people every year than Egypt, and many of these executions are for political crimes,” the Connecticut Democrat said on the Senate floor.

“When countries accept our money and continue to thumb their nose at our values, it makes America look like a patsy,” he said.

The United States provides some $1.3 billion in military aid to Egypt annually. In 2017 Congress passed legislation that would block the release of $300 million of that aid unless Cairo curtails its human rights abuses and releases political prisoners.

Murphy’s plea came as the Biden administration weighs whether or not to withhold that aid.

Rights groups such as Human Rights Watch estimate that some 60,000 people languish in Egyptian prisons on political charges.

“It’s unacceptable that we will be providing a billion dollars in assistance to Egypt while they are holding a single American in prison for political crimes,” Murphy said Wednesday.

Politico reported earlier this month that Egypt’s intelligence chief, Abbas Kamel, had told Congress that a US official had agreed that the United States would have Egyptian-American activist Mohamed Soltan serve the rest of the life term he was sentenced to in Egypt as a condition of his release from detention in Egypt. The release was negotiated by the Obama administration.

Two of Soltan’s relatives were arrested in Egypt in February. The US-based Freedom Initiative, founded by Soltan, called the arrests “retaliatory aggression” for a lawsuit he filed last year against Egypt’s former prime minister over Soltan's torture while he was imprisoned.

The wave of repression has included allegations of torture and murder of prisoners, as well as what the UN human rights office has called “show trials.”

Proponents of sustained US military aid to Egypt have argued that Sisi’s regime has increasingly turned to other countries —– namely Russia and France — for military hardware, thus limiting precious US leverage over Cairo’s human rights abuses.

Egypt’s purchase of advanced Russian Su-35 aircraft has concerned many in the Pentagon, who see Russia’s opportunism in the Middle East as a threat to US influence.

Yet Murphy on Wednesday made an impassioned case that whatever leverage the United States has over Cairo, it has largely declined to use it. He also argued that it is unlikely Cairo will violate its peace treaty with Israel or preferential treatment to US ships transiting the Suez Canal if some aid is withheld.

“Until Egypt makes real concessions on reform, it won’t fundamentally harm US interests in the Middle East. It will make us more safe,” he said.

Moreover, he argued, the Biden administration was elected on a platform of putting human rights first in its foreign policy.

“It’s painfully clear that the lesson Egypt has learned over the years is a simple one: America is not serious about human rights,” he said.

“How do you tell Russia and China to stop their campaigns of political repression when we so openly endorse the grandiose scale of Sisi’s?” Murphy asked.

“An administration that wants to lead on democracy and human rights cannot send another $1.3 billion to Egypt, no strings attached," the senator said.

“To do so would be to endorse Sisi’s crackdown and send a bright, blinking message to the world that America talks a big game on democracy, but doesn’t do much about it.”