Egypt's multi-cultural festival dances to beat of one drum

Egypt embraces international cultures and showcases its unique heritage in the 5th annual International Festival for Drums and Traditional Arts. 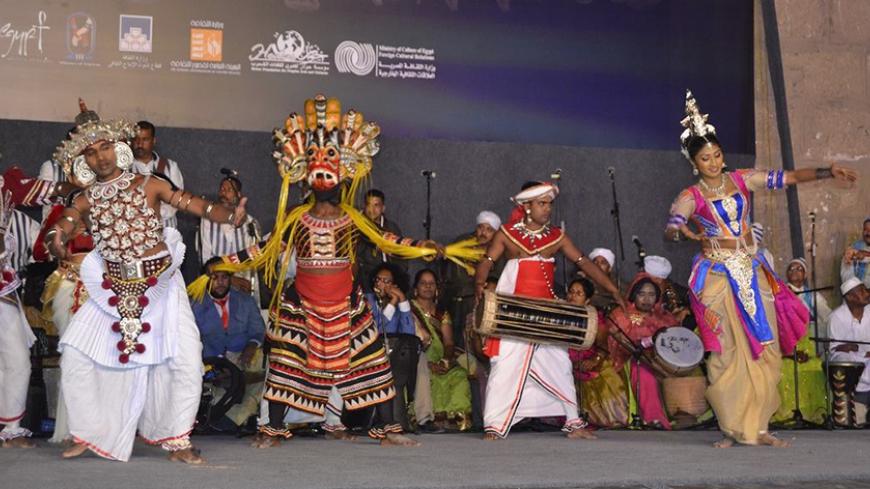 The fifth edition of the International Festival for Drums and Traditional Arts kicked off with beating drums and performances by folkloric troupes in the Egyptian capital April 20.

About 30 local and foreign folkloric troupes from Africa, Asia, Latin America and Europe take part in this 10-day festival.

With the slogan “Drums Dialogue for Peace,” the festival aims at spreading tolerance and peace, according to Entissar Abdel-Fattah, the founder and director of the festival.

"It aims at ensuring that Egypt is embracing all diverse cultures," Abdel-Fattah told Al-Monitor.

During the festival's opening ceremony, Minister of Culture Helmy el-Namnam said that despite the terrorism facing Egypt, "We will never let them spoil our lives. … We will confront terrorism with our armed forces, the police and with art and culture as well."

Apart from the foreign troupes, the festival sheds light on the uniqueness of Egyptian traditional heritage. There are folk troupes from Halayeb and Shalateen; the New Valley; el-Arish of North Sinai; Nubia, Luxor and Sohag from Upper Egypt; and Matrouh in the northwestern part of the country.

Many workshops are held during the festival between the Egyptian and foreign troupes in order to play and rehearse together in harmony.

"All the participating troupes are merging into one and playing the same rhythms with the same spirit," said Abdel-Fattah, who is a theater director and the head of el-Ghouri Creativity Center, affiliated with the Ministry of Culture. He established a number of folkloric troupes in Cairo, such as the Nubian Drums and Folk Instruments Troupe in 1990.

"Despite their different nationalities, they are fusing into one entity using just human communication, art and creativity," he said.

The festival is organized by the Ministries of Culture, Antiquities, Tourism and Planning. The festival has seven venues; most of them are prominent buildings in Cairo.

Some performances are being held in the Yusuf’s Well theater in the Salah El-Din Citadel. The theater was named after the well, which according to legend, belongs to God’s messenger Yusuf.

Another venue is the Qubbet Al-Ghouri theater, which was built in 1504-1505 during the reign of Mamluk Sultan Al-Ghouri.

On one of the festival's days, there is a five-hour parade by all the troupes along Moezz Street, one of the oldest streets in Egypt dating to the Fatimid era. Dozens of architectural structures are scattered along this street.

During the festival, an exhibition held at Salah El-Din Citadel presents crafts of the participating countries that reflect their peoples’ cultures and civilizations.

The festival's closing ceremony April 26 coincided with the nation's yearly celebration of Sinai Liberation Day, which commemorates the final withdrawal of the Israeli forces from the Sinai Peninsula in 1982.

"On this day, all the troupes perform and dance on the traditional Sinai rhythms," Abdel-Fattah said. "This will help draw people's eyes to Sinai, a place of tolerance and peace."

Abdel-Fattah said that from April 28 to May 1, some troupes will fly to Luxor to perform inside Luxor Temple. This massive Ancient Egyptian temple complex located on the east bank of the Nile River was constructed in 1400 B.C.

Egyptians look forward to this festival every April. Spectators are entertained by the dances of these troupes with their colorful, traditional costumes that add a joyful atmosphere to the historic places.

"It is a joyful event, indeed," Ahmed Morad, an accountant, told Al-Monitor. "Every year, I wait for this opportunity to see the shows of different countries. Something that is difficult to see even on TV."

Nagwa Sayed hopes that this year she can attend the festival. "Because of the huge attendance of the last year's edition, I couldn't attend," Sayed, who hails from the coastal city of Alexandria, wrote on her Facebook page.