Players of tahtib, an ancient Egyptian stick fighting martial art, are on a mission to revive the early art form now as an internationally recognized sport. 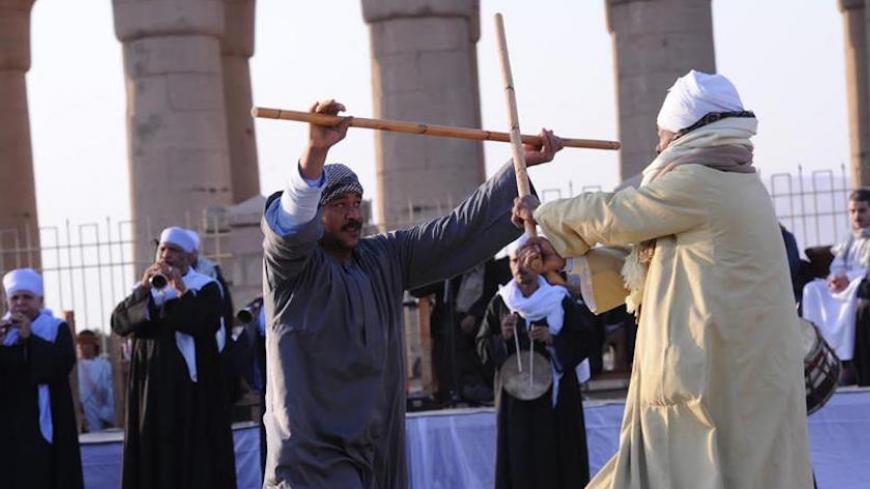 Players of an ancient Egyptian martial art are striving to revive it and turn it into a sport that aims to foster morals, respect and chivalry. Tahtib was once known as a martial art but has since changed into a stick game or dancing art. Its players now say that they want it to be an internationally recognized martial sport.

“We want to have our federation, a league, and we want the sport to be internationally recognized, as well,” Sabry Mahmoud el-Sohagi, a stick game coach, told Al-Monitor. Sohagi is a manager at the International Center for Teaching Tahtib, which is based in the Upper Egyptian city of Sohag.

The self-funded learning center was established two years ago and has taught about 50 people from Upper Egyptian governorates to play the stick game. The center’s founders are pushing ahead with efforts to spread knowledge of the sport in Egypt and abroad.

Sohagi said that the challenges are many. However, he added that he and his colleagues are feeling upbeat about the future of the game, especially after UNESCO recently added tahtib to its Representative List of the Intangible Cultural Heritage of Humanity.

“It is a wonderful move, as it gives world acknowledgment to tahtib,” Sohagi said.

The UNESCO enlistment came in accordance with decisions adopted by the Intergovernmental Committee for the Safeguarding of the Intangible Cultural Heritage, which convened in Addis Ababa, Ethiopia, Nov. 28-Dec. 2.

Egyptian Minister of Culture Helmy El-Namnam said that the enlistment is a successful step toward preserving Egyptian heritage from being squandered or stolen. The Egyptian Ministry of Culture also said in a statement Nov. 30 that tahtib was added to the UNESCO list of intangible heritage after all-out efforts exerted by the government as well as after receiving strong support from some Arab countries.

Nahla Emam, head of the Egyptian delegation that attended the UNESCO committee meetings and an expert in intangible heritage, said that the government proposed tahtib to join the UNESCO list of intangible heritage in 2014, but it was not accepted, as it did not conform to required standards.

“We presented the game this year, and we succeeded in convincing the committee to add it to the list,” she added.

Tahtib is usually performed before an audience and involves a brief, nonviolent interchange between two adversaries. While a clarinet and drums are played, the two players wield long sticks in a friendly joust. This performance mainly takes place on social occasions and in festivals in the villages and cities of Upper Egypt. Tahtib is also performed before tourists at the country’s attractions in Luxor and Aswan in order to give tourists an idea about ancient Egyptian heritage.

A national festival for tahtib is held every year in Luxor where folkloric troupes and tahtib players showcase artistic performances.

Tahtib is mostly practiced in Upper Egypt. Yet the players have begun to travel to other parts of the country to introduce the game. They have also traveled to Italy and France to make tahtib performances popular abroad. Tahtib veteran player and coach Atef Ahmed Abdallah said that the number of tahtib players can reach up to 10,000 across the country. “We have players from Sohag, Qena, Luxor and Aswan. And we are planning to have players from coastal cities in the near future,” he added.

Players are male, and the rules of the game are based on mutual respect, friendship, courage, chivalry and pride. The game is passed on within families and neighborhoods in the communities.

According to people interested in the practice, tahtib fosters respect and morals among players and enhances self-restraint and balance. The players are seen as royalty in their communities, as fans look at them as “knights.” “It is a moral game and an ancient art. That is why we are keen on promoting it all over the world to give a picture about the character and morals of Egyptians,” Abdallah said.

In ancient Egypt, tahtib was a stick fighting martial art. It was originally called Fan A’Nazaha Wa-Tahtib, which in Arabic means the art of being straight and honest through the use of stick. It has also evolved into a traditional form of Egyptian folk dance involving a wooden stick, also known as stick dance or cane dance.

Several inscriptions showing people jostling with sticks can be seen on papyrus and the walls of temples, according to archaeologists.

The oldest traces of tahtib were found on engravings in the archaeological site of Abusir, an extensive necropolis of the Old Kingdom period, located in the southwestern suburbs of Cairo. On some of the reliefs on the Pyramid of Sahure (2500 B.C.), the images and explanatory captions depict what seems to be a military training using sticks. Tahtib, with archery and wrestling, was among the three warfare disciplines taught to soldiers during their training.

The stick is about 4 feet in length and is often waved in large figure-eight patterns across the body with such speed and violence that the displacement of air is loudly discernible.

Although the game is played only by men, there are now girls and women who want to join the sport. Sohagi said that he hears from many women who are eager to get trained in tahtib and start playing the game. He added that his center is trying to arrange training courses for women and then organize women-only matches and a league.

“It would be difficult to have that in the conservative communities of Upper Egyptian governorates. Yet we can organize these courses and matches in other parts of the country,” Sohagi said. Upper Egypt is known for its fundamental, old-fashioned views on religion and gender.

With lack of government support and financial assistance, Sohagi believes that his mission and that of his fellows will be tough. However, he said that they will not budge.

“At least we are trying. We know that it will take us years to spread the art and turn it into a sport. But we will never give up, because we want to preserve our heritage and prove that the game can be a good addition to the world of martial sports,” he added.