As the first Egyptian woman certified to teach and compete in the discipline of tahteeb, Rania Medhat is training others in the ancient Egyptian sport. 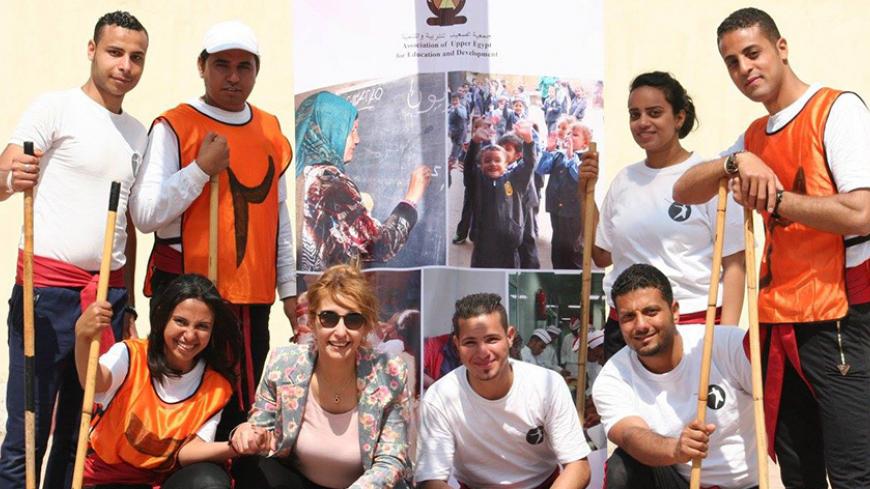 Rania Medhat (bottom L) and other practitioners of the martial art tahteeb pose for a photo in Cairo, in a photo uploaded on April 1, 2017. - Facebook/Modern Tahtib

Both fate and her fondness for tahteeb, a stick-fighting type of martial arts, played a role in the life of Rania Medhat, the first Egyptian woman ever certified as an instructor in this art, which dates back to the days of the pharaohs.

"I am the first woman [in Egypt] ever to play and teach tahteeb," Medhat, 24, proudly told Al-Monitor. Medhat is a physical education teacher at a girls-only school in Nekheila village, in the Upper Egypt governorate of Assuit.

She has long adored tahteeb. "I have been fond of this art since my childhood. I've always watched the competitors' performances in the Egyptian cinema because in Upper Egypt, women are not allowed to attend among the spectators," she said.

The history of tahteeb dates back to the Old Kingdom of Egypt, also known as the Age of the Pyramids, which ran from roughly 2700 to 2150 B.C.

Engravings of the sport have been found at the Necropolis of Abusir. The martial art was one of three taught to soldiers during their training, along with wrestling and archery.

Tahteeb evolved into a stylized stick-dancing game, practiced since the New Kingdom (roughly 1550-1077 B.C.). Depictions of tahteeb performances at festivals have been found engraved in walls of Luxor and Saqqara. Today, Upper Egyptian men perform tahteeb as a folkloric art on religious and festive occasions such as weddings.

Medhat's journey started at the beginning of this year, when she was selected by the Association of Upper Egypt for Education and Development, a nongovernmental organization based in Cairo, to take part in a modern tahteeb training course in Cairo. The course was taught by Adel Boulad, the founder of modern tahteeb.

Medhat completed the 30-day training program in February and became Egypt's first certified female player and instructor of tahteeb. Her team is currently being developed in Nekheila.

"I didn't find any difficulty in learning tahteeb itself. All it needs is concentration and flexibility, which I already have as a physical education teacher," she said. She added that her family encouraged her pursuit, especially once they learned she would be practicing in Cairo training centers and not in front of men in the village.

“In the Upper Egyptian governorates, with their conservative communities, it is difficult for me as a woman to perform tahteeb, a male-dominated sport. So I attended the courses in the capital. The first-ever modern art tournament for tahteeb will be held this July in Cairo as well," she said.

Asked about modern tahteeb and the differences between it and the traditional practice, Medhat said Boulad made no fundamental changes to the historic art. He just developed it as a modern sport.

Medhat described the atmosphere of practicing tahteeb: Spectators form a circle and surround two competitors, who each hold a rattan stick. Music is essential, and the scene includes drummers and players of mizmar, a wind instrument.

After performing an opening ritual, competitors take turns making one-minute "assaults." The objective is to touch — not strike — the other's head without being touched. She explained that victory is won with any touch on the head or three touches on the rest of the body. Players must stay within the circle.

Medhat said that when her friends see her successfully practicing tahteeb, they too become eager to learn it. "Many children also attend my performances and ask me to teach them," she said, pointing out that any child with a strong body can perform tahteeb.

She urges all Egyptians to learn the historic art and hopes tahteeb will be included as a sport in Egypt's physical education curricula like other marital arts.

"Apart from being our ancestors' heritage, tahteeb helps in developing one's physical skills" like flexibility, reaction speed and strength, she said. "It can be used as a new method in fighting a harasser, even without the stick," she said. "This art is really helping to strengthen the Egyptian identity and enhance the self-confidence of its practitioners."