Cairo is working to revive interest in the 5,000-year-old marital art of tahteeb, which soldiers practiced to train for war. 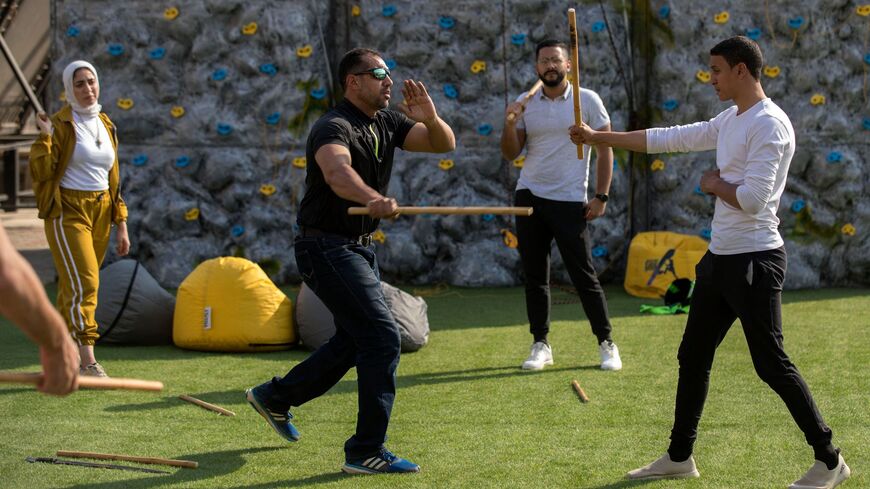 Players train for Egypt's combative sport of "tahteeb," a stick-fighting martial art, at a sporting club in the Rihab suburb on the eastern outskirts of the capital Cairo, on March 18, 2021. - KHALED DESOUKI/AFP via Getty Images

Radwan Mansour inherited his nearly two-meter tahteeb stick from his father in Luxor Governorate to the south of Cairo.

Mansour, who is now in his 50s, told Al-Monitor that his father taught him the rules and arts of the fighting game when he was 10 years old and it has ever since been a meaningful part of his life.

Tahteeb is well known in the Upper Egypt governorates. According to folklore researcher Masoud Shoman its name derives from “hatab,” Arabic for "dead branches." He added that the strikes are not necessarily hard and that players earn a point whenever their stick touches their competitor.

Tahteeb was added to UNESCO's Intangible Cultural Heritage List in 2016 as a martial art. The organization's description reads, "Its role has since changed to that of a festive game but some of the symbolism and values associated with the practice remain," and "The rules of the game are based on values such as mutual respect, friendship, courage, strength, chivalry and pride.” In cooperation with UNESCO, the Egyptian Ministry of Culture is seeking to revive popular interest in the game.

According to Shoman, the game is 5,000 years old. Depictions of tahteeb have been found engraved on the walls of the temples of Abydos in Sohag and Bani Hassan cemetery in Minya. It has been documented as a martial art performed by soldiers in preparation for combat and by regular people to defend themselves their properties. Today, it has become a popular performance at social events such as weddings, especially in Upper Egypt.

He expressed satisfaction with the Egyptian administration's attention to the country's heritage and arts.

Hassan Fathi, a prominent Egyptian architect (1900-1989), was known for his unique architectural style, known as “the architecture of the poor.” It stemmed from rural Nubian architecture, which is distinguished by the domes and use of mud bricks. Fathi founded a village called New Qurna in Luxor Governorate to preserve the ancient character of Egyptian architecture. It includes a large square for tahteeb to be played.

In December, the 11th edition of the National Tahteeb Festival was held in Fathi's village, with participation by seven national teams and 33 players. Culture Minister Enas Abdel Dayem has called the festival in New Qurna the fulfillment of Fathi’s dream.

The festival’s president Ahmed Shafei told Al-Monitor that the event included a wide variety of exhibitions to highlight the skills of the national teams and senior players and promote the game in general.

Shafei said that Egyptians’ enthusiasm for the festival came as no surprise, considering their popular interest in folk music. Even children who have never seen tahteeb before want to play when they hear the music start.

“Any country in the world can organize film festivals and car races, but tahteeb only exists in Egypt,” said Sayed, telling Al-Monitor that many tourists have a desire to attend events that are exclusive to Egypt and noting the Ministry of Tourism's successful promotion of festive astronomical events in Aswan.

Twice a year, thousands of tourists are fascinated by the sun directly striking the face of the statue of Ramses II in Aswan. This phenomenon, which happens each Feb. 22 and Oct. 22, may mark Ramses II’s birthday and the day he ascended to the throne or the first days of the harvest and planting seasons.

Moataz al-Sayed, former head of the General Tourist Guides Syndicate, said that Tahteeb Festival and other events that shed light on life in sncient Egypt, such as the celebration of Pharaonic holidays, are a valuable addition to tourism.

He told Al-Monitor that Egyptian cultural heritage needs such events and stressed the need to promote them internationally.