US puts off announcing decision on Raqqa until after Turkey referendum

The US military wants to work with local forces against the Islamic State in Raqqa, but still is working out many of the details, including who should hold what ground after IS is defeated. 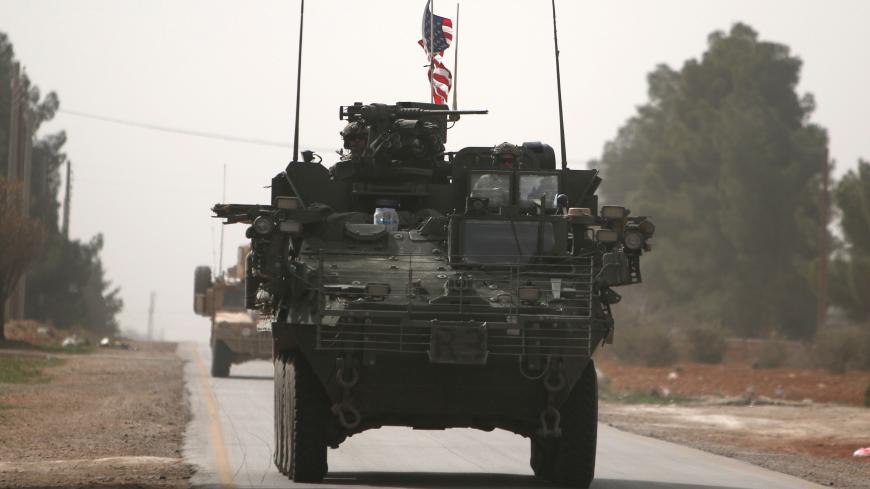 US Army vehicles drive north of the Syrian city of Manbij, retaken from the Islamic State last year, March 9, 2017. Manbij is about 135 kilometers (84 miles) from Raqqa, the IS headquarters. The United States is still working out a timetable for a final assault of Raqqa. - REUTERS/Rodi Said

The Trump administration’s internal debate over how to capture Raqqa, the so-called capital of the Islamic State (IS), is continuing nearly two weeks after the Pentagon presented the White House with a detailed blueprint on how to do the job.

The US Central Command remains strongly in favor of moving ahead with the Syrian Kurdish group known as the People’s Protection Units (YPG) and their Arab allies who operate under the umbrella of the Syrian Defense Forces (SDF). But concerns over Turkey, a critical NATO ally, are holding up plans to arm and train the SDF under the terms of a special presidential dispensation known as Section 1209 that permits the Pentagon to arm nonstate foreign militias. Turkey has repeatedly warned against giving the YPG modern sophisticated weapons, saying the group could transfer these to its ally, the Kurdistan Workers Party, which is fighting for autonomy inside Turkey.

Trump has not signed Section 1209 for the SDF yet even though the Obama administration recommended he do so. The announcement of a final decision on Raqqa has likely been put off until after Turkey votes in a referendum April 16 that would formalize the sweeping powers President Recep Tayyip Erdogan already wields. Washington is worried that Erdogan will use the issue to whip up further anti-Americanism and take further aggressive action against the YPG in Syria to boost nationalist votes.

Secretary of Defense Jim Mattis is said to be among those raising red flags over the long-term effects of acting in concert with a group that Turkey views as terrorists. “He’s thinking beyond Erdogan and focusing on the partnership with Turkey, and how this will impact relations in the long term,” said a senior administration official familiar with the debate. Some administration officials participating in the debate are arguing in favor of postponing Raqqa, saying that IS — under assault from all sides and its access to Europe via Turkey now cut off — no longer poses an immediate threat.

That position is said to be embraced by some members of the international coalition, notably Britain, which has close political and commercial ties to Turkey. These have become even more valuable to Britain amid its growing isolation over Brexit. UK officials privately say they have zero interest in helping promote the Syrian Kurds’ aspirations for political autonomy.

But the debate over Raqqa is not limited to Turkey, and administration officials say that in all likelihood CENTCOM’s wishes to proceed with the SDF will be respected.

Trump administration officials are focusing on the broader fight against IS and how to ensure that it does not return once it is pushed out. The Syrian Kurds have a track record of being able to work with the Syrian regime, as they recently did in Manbij where they ceded control over a string of villages to regime forces to hold attacking Turkish-led forces at bay. Could this become a blueprint for Raqqa? Some administration officials think so.

Nicholas A. Heras, a Bacevich fellow at the Center for a New American Security with deep knowledge of the region, has been closely following the conversation in the Trump administration over how to move forward in Syria. He shared his insights in an interview with Al-Monitor. The text of some of the highlights follows:

Al-Monitor:  There is a lot of speculation over what the Trump administration is going to do in Raqqa. What is your take?

Heras:  The Trump administration is actually having a much more strategic, and necessary, discussion about what is the long-term objective of the United States in Syria at the end of the counter-ISIS [IS] campaign.

It is having a tough but needed dialogue with itself, with the input of the US military, about how long the United States needs to be in Syria once ISIS' caliphate is conquered there.

Al-Monitor:  How would you characterize the differences in the approach to Syria between the Obama adminstration and this one?

Heras:  The Trump administration does not want Obama's creeping incrementalism in Syria through the counter-ISIS campaign to result in an indefinite American military mandate in Syria over formerly ISIS-ruled areas that would require the deployment of thousands more US ground troops as a stabilization force. This could be a very politically unpopular move for the American voting public that liked Trump's campaign promise to put “America First” and avoid long-running and expensive foreign interventions and nation-building like the Iraq war.

The devil's dilemma for the Trump team is that it also does not want the US military to beat ISIS in Syria, hand the territory off to local Syrian partner forces and allies like Turkey, Saudi Arabia, the United Arab Emirates and Jordan, and have those partners fail to prevent the re-emergence of ISIS once the United States left. That would also be a political embarrassment.

Al-Monitor:  So is there a chance that it could end up, albeit indirectly, working with the Assad regime?

Heras:  The Trump team is trying to avoid as much as possible an American military mandate in Syria, and American withdrawal and subsequent partner failure to prevent the return of ISIS. It might decide to give the territory taken from ISIS back to Russia in order to stabilize, which means to [Syrian President Bashar al-] Assad. The blame for failing to keep ISIS from coming back would fall to Russia and Assad and Iran, and the Trump administration can say that US partners, particularly Turkey, failed to provide an alternate holding force that would have made returning the territory to Assad unnecessary.

Al-Monitor:  Could you elaborate?

Heras:  Turkey has a weak hand because the SDF has demonstrated that it can cut a deal with Assad to connect the cantons of Rojava. Turkey would also have to invest in a large military occupation of Syria to be the hold force for Raqqa, which would be expensive as it fights a civil war with the PKK in eastern Turkey.

Al-Monitor:  So are you saying that Turkey’s role will be very limited?

Heras:  Turkey has to ask itself whether it wants to have an indefinite Turkish military mandate over suspicious Arab tribes in eastern Syria far from its southern border. In essence, that is what the United States is asking Turkey to commit to if Erdogan wants to be the force that has the prestige of conquering Raqqa.

Al-Monitor:  What about Iran? How can you plan an endgame for Syria without taking Iranian influence into account?

Heras:  The Iranian Revolutionary Guard Corp [IRGC] is willing to play the long game in Syria, even if that long game is measured in a decade or more of a counterinsurgency war. From the Iranian perspective, Iran is engaged in a sacred defense of the homeland by fighting Salafist extremist groups in Syria.

Both Assad and Iran have an ultimate non-negotiable objective [of] reconquering all of Syria.

Al-Monitor:  So how does the Trump administration address Israel’s security concerns over Iran?

Heras:  Israel does not want the Iranians to use the Golan Heights region of Syria to open another front against it through the IRGC's Shiite proxy militias. The Southern Front, a coalition of rebel groups, many of whom have been trained and equipped by the CIA — and who control a significant amount of territory near the Jordanian border — would be empowered to push back on Iran in the Golan Heights and against the ISIS affiliates in southern Syria. The Southern Front would be supported by Israel, Jordan, the UAE and the United States. The Southern Front is an Israel-Jordanian effort, separate from Turkey, Assad and Russia.

The Trump administration could delegate support for the Southern Front to Israel and Jordan, while simultaneously relinquishing control of a conquered Raqqa to Assad.

The Trump team could take a region-by-region approach to Syria, which would allow close partners to pursue counter-Iran strategies in one region, such as in the south, and relinquish control of areas conquered from ISIS in eastern Syria to Assad.