A female politician with an ultranationalist background rocks the social and political scene on International Women’s Day using a simple flag designed on her palm with henna. 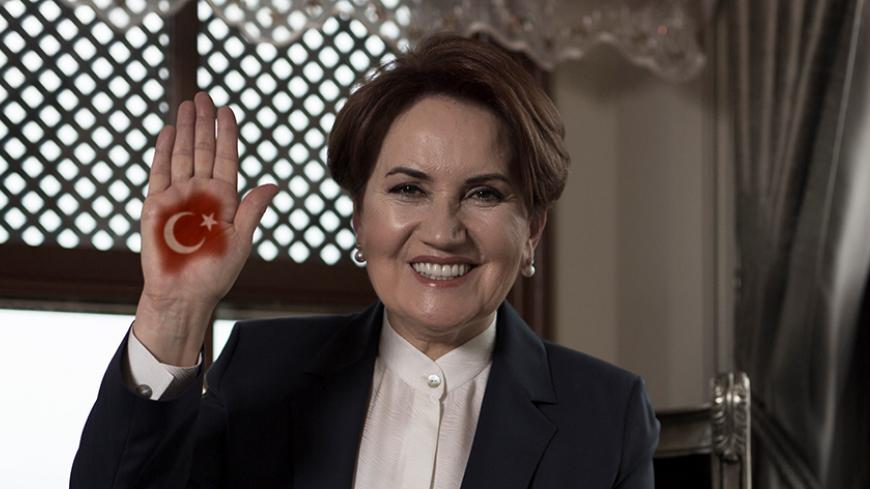 Turkish politician Meral Aksener poses with a henna Turkish flag on her palm in this image uploaded Feb. 11, 2016. - Facebook/meral.aksener.9

A simple symbol has become a social media phenomenom in Turkey as women make their opinions known without words.

One of the most intriguing developments arising from an upcoming referendum has been the deep split within the Nationalist Movement Party (MHP), many of whose members are known as Gray Wolves. Devlet Bahceli, longtime leader of the ultranationalist group, supports the government and the proposed constitutional amendments to extend presidential powers. But several senior party members, along with various local leaders of the movement, have voiced their clear stand against the amendments and distanced themselves from Bahceli.

One of the most prominent leaders of the movement, Meral Aksener, is a woman in her early 60s who has been active in politics for more than two decades; she served in parliament for the MHP from 2007-15. Aksener is a respected figure in the party, but also a victim of intense rivalry among the party elites. Her critics have made several attempts to paint Aksener as a member of the Gulen movement. In September, the MHP Disciplinary Board expelled her after she formed a movement to try to remove Bahceli from the leadership.

For the past month, Aksener — along with a group of male MHP dissenters — has been running one of the most determined campaigns of the platform opposing the amendments. The ultranationalist base in Turkey respects and follows her. Her overcrowded rallies in different parts of Turkey have faced and overcome unexpected challenges. For example, in early February in Canakkale province, just as Aksener was about to start her speech, the power was cut off. However, she carried on with a megaphone and the audience used their cell phones’ flashlights.

In mid-February, Aksener posed with a henna tattoo of the Turkish flag on her palm. The image immediately became a trending topic on social media and received the admiration of many Turks from all walks of life.

Yet Bahceli was not impressed and harshly criticized the trend. His disparaging comments backfired, as young soldiers in uniform, elderly women and little kids starting posing with crescent-and-star henna designs on their palms. #KinaliEllerHayirDiyor (Hands with Henna Say No) kept trending for days on Turkish social media, as hundreds of people from all over Turkey posted photos of palms sporting the flag.

During campaigning for or against the April 16 referendum, most political parties announced they would only use the Turkish flag, not their own political parties’ symbols or flags. And it was brilliant for Aksener and her team to use henna. Henna is a symbol of innocence and sacrifice in Turkey and the region. Turkish bridal showers often include the bride getting a henna design on her palm. Young conscripts also get henna on their hands just before they are sent off to serve their country, as a symbol of dedication. For the people of Anatolia, henna symbolizes new beginnings, excitement and sacrifice for an important cause. It is an ancient tradition that has been cherished by Jews, Arabs, Alevis, Kurds and Turks — it is an image that unites and transcends politics.

Nilden Postalci, an academic specializing in political communications and a former candidate for parliament from the Republican People’s Party (CHP), told Al-Monitor, “As a politician and communication expert, I can say it is a rare instance to observe a political symbol so effective. Political symbols are crucial for success, because with it a politician conveys multiple messages: who you are, what your message is and what your goals are. Yet, of course it can be difficult to have that symbol be accepted. Your audiences should own your message; it should resonate with them.”

During a television interview, Aksener said this idea was brought to her by young volunteers from her grassroots organization. No longer an official member of the MHP, she is campaigning on her own and chose to wear the tattoo. Postalci was impressed with the henna hand symbol. She said Aksener, after being blocked from MHP leadership, is now an underdog, and with the flag henna design on her palm she is able to give multiple instantaneous messages to the public and her opponents.

At a time where all opposition is silenced in Turkey, what can a henna tattoo do? Postalci explained that this symbol hits a bull's-eye on three different fronts. First, henna is mostly seen as belonging to women in Anatolia. (Unlike other parts of the Muslim world, it is rare to see men coloring their hair or beard with henna in Turkey.)

"Henna is a symbol of women’s happiness, their sadness; it is an image of Anatolian mothers,” Postalci said. Henna stands for resilience and strength. In a way, henna flags on hands gave confidence to people who are saying no to the amendments.

Next, Postalci focused on the flag, which has become the symbol of national unity since the failed coup July 15. Even though the MHP expelled Aksener, with the flag tattooed on her palm, she stands above the party, embracing all nationalists and telling the masses, "I am a woman of Anatolia."

Particularly at a time when the government was displaying the Kurdish flag to greet Massoud Barzani, the president of the Kurdistan Regional Government, the image of Aksener’s palm became all the more welcoming to the confused and wounded spirits of Turkish nationalists.

Postalci said the internet images of hands with the henna flag design were the most brilliant way to reach out to groups who are not interested in reading about, writing about or listening to politics. She believes this was the most successful political image created over the past couple of decades: It symbolizes a strong resistance.

“Now women who may be apolitical and keep silent are sharing their images with henna hands. As a communications expert I believe this political image — unless, of course, it is stopped — will evolve into an even wider and fancier campaign,” Postalci said.

Women are a sight for sore eyes in Turkish politics. For decades, the most outspoken women in politics have appeared from the Kurdish movement and Turkish left. There are few female role models from the Turkish right. The MHP has the lowest ratio of female lawmakers among the four parties in the parliament, and Aksener has a unique opportunity because she has earned the respect of even those who do not agree with her.

A Kurdish Alevi female politician who asked to remain anonymous told Al-Monitor: “Aksener is a survivor. She is not just a female politician, but one who has been a victim of sexist insults and kept her head high. Men from her own movement were scared of her and wanted her to quit politics. She did not. Several Kurdish female activists stood against those who attempted to slander Aksener.”

With almost all dissidents silenced in Turkey, a simple henna flag on Aksener’s palm has emerged as a fresh symbol of hope in a rather depressed country.

On March 8, International Women’s Day, as women sang and marched down Istanbul’s famous Istiklal Avenue, some of them displayed the henna designs on their hands to show they reject the proposed amendments. One of them told Al-Monitor, “We will send henna powder to the leaders. They need it to remember the ordinary people will always find ways of peaceful resistance.”